Wayland Henry Cato III is an invaluable piece of the original fabric of Charlotte’s arts scene. He is a figure known for his timeless and unique works, primarily as an award-winning glass and crystal artist. And Cato is perhaps just as well-known as someone who has dedicated his entire life to fearlessly chasing his passions – from training extensively in his craft, running a glass art studio and gallery in San Diego and traveling the globe, to running a horseback riding club on the beaches of coastal Carolina.

Growing up surrounded by nature in the 1950’s on a plot of Charlotte farmland was where Cato first developed the creativity that would ultimately lead him to pursue a career that landed his art in public and private collections from North and South America to Europe, Egypt, and China. His roots in Charlotte, a place where he would return to for good in 1997, infuse his work just as much as the roaming elephants he saw firsthand in Africa or the landscapes he has explored in Asia.

Cato witnessed firsthand the burgeoning arts scene of Charlotte through the years, and describes it as a market that today offers something for everyone – “from your first time buyer to seasoned collector.”

When he was as young as four or five, the young boy found himself drawing anything and everything. He dabbled with all sorts of art throughout his childhood and adolescent years, including oil painting, and took classes in the basement of the Mint Museum. Open about childhood struggles with dyslexia, Cato says that because he had difficulty in school, he would often spend his time in class just dreaming of the moment he could get back to his art.

It was one year at home over the holidays when Cato noticed in a new way his mother’s cut crystal up on the mantle.

“It occurred to me that if deep lines could be made in glass then perhaps I could make my pictures on glass,” Cato says. “When engraving glass with a stone wheel you have to engrave it upside down and reverse. That was what I saw in my head all along! I had found the medium to express myself in and that I would spend the rest of my life working with.”

Once he found glass art, Cato became a purely self-taught artisan on everything from how to improve the engraving mechanics, to shaping sandstone wheels, to how to show depth, shadows, and light. He threw himself into the pursuit entirely. 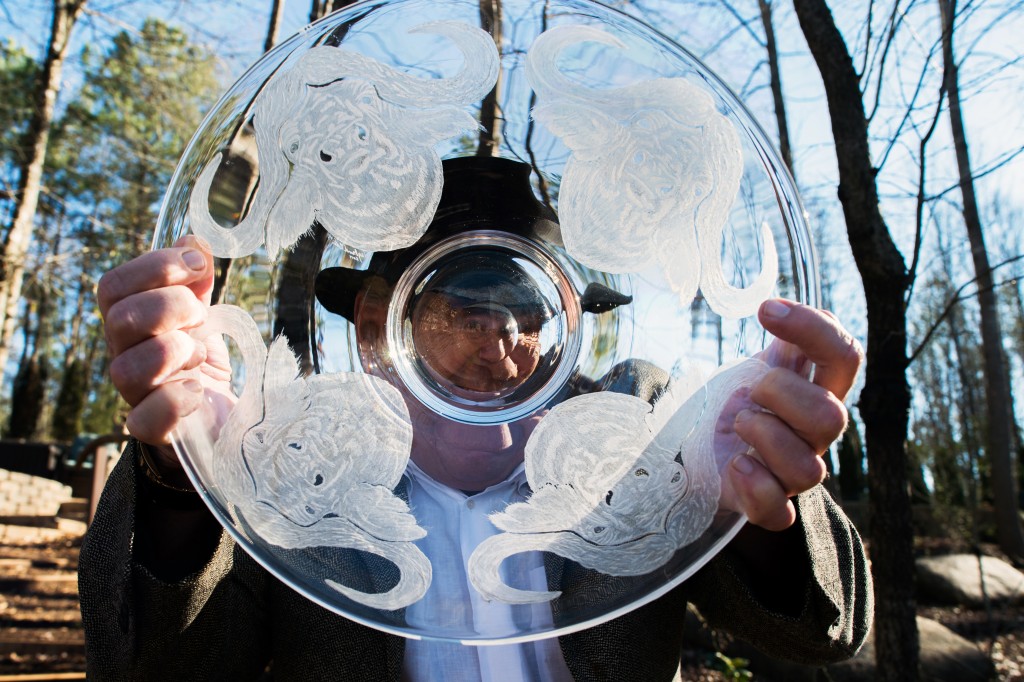 It’s been said that Cato singlehandedly brought stone wheel engraving to new heights, reviving an art that had seemed to all about die off in the early 1800’s when the copper wheel (which many artisans use) came onto the scene.

The technique that came readily to Cato is so precise as to be almost hard to fathom for the layperson.

“Working in cold glass is different than hot glass,” Cato explains. “Cold glass is a much lengthier process. Once I get an idea or direction I’d like to go in, I look for the glass that would best fit the vision and purpose. I like to use any technique for creating from diamond stippling, carbide wheels, diamond wheels, copper wheels, sand blasting, and different metals- including gold- that can be fused into the surface of the glass. I don’t rule out anything as long as I can make it part of the glass.”

The rest, Cato tells us, is history – his works were commissioned for countless presidents and politicians (like Jimmy Carter and Henry Kissinger), for Anwar Saddat of Egypt, Bob Hope, Steven Allen, Waylon Jennings, and many more. He was even made the Art Glass advisor to China, as well as their Good Will Ambassador.

Cato is a true unabashed lover of the arts, consuming anything he can to inspire the spark within, and naming among his influencers everyone from the cave painters of the Stone Age to the original European fine art masters.

“My fine art and engraving has consumed my life, taken me around the world, and enabled me to meet many incredible people,” Cato says. “Art is the passion that I go to bed dreaming about and I wake up thinking of. I can’t wait to see what that day has to bring, who I might meet or talk to and what opportunities await. I do know that I will be doing my art until the very end!”