Grace Morales often makes jokes about her height; at five-foot-something, she may indeed not always be the tallest person in the room, but “small” is the last thing you’d be caught associating with her. Her hard-won wisdom and larger-than-life presence are tied up in Morales’ story of how she made a life out of her yoga practice.
Yoga is something you practice and not something you ‘do.’ The point is in the journey, not in reaching an instrumental end goal. Grace’s life mirrors this perfectly: the path to health, wellness, and balance that her life reflects has been full already, but she is as passionate about continuing to pave it as she was when she began.
A well-known, multiply-certified yoga instructor and trainer, Grace, who started her yoga practice in her living room using VHS tapes, is responsible in large part for pioneering the Charlotte yoga scene two decades ago. She founded and owned Charlotte Yoga, the city’s first Power Yoga studio, after moving here in 1995.

While she headed that space, she steered Charlotte toward what is now a common, even trendy, approach in studios nationwide: hot power yoga. This form involves flowing in quick succession from one pose to the next in a room heated anywhere from around 82 to 104 degrees.
Today, she teaches multiple certifications for yoga instructors, leads several workshops a year, and conducts her own classes across the Queen City area. With 30-years of fitness industry experience behind her, she has successfully made a name for herself not just in the Tar Heel state, but well beyond.
Grace is all about connection – she is one of those rare people who will at one moment make you feel seen and heard, as if she has peered inside and grasped something fundamental but oh-so-simple about human nature. At the very next moment, she will have you cracking up at a slightly off-color joke. This is what makes her such an incredible teacher: as much wisdom as she’s gained, she is totally relatable; she neither takes herself too seriously nor misses the important stuff. This ability to balance the weightiness and the lightness that goes well beyond just yoga makes her a powerful presence. There is a good reason why, if you know Charlotte yoga, you know Grace Morales.
One of the things that becomes most immediately clear when you speak with her is just how much her work is entirely intertwined with her life.
“I never dreamed I could love a career so much, but career is second compared to the things I have learned about myself,” she says. “Yoga has a way of bringing out the best in us. I am surrounded by the most kind, strong, generous people you could imagine. It is part of my normal day to go to work and have someone say ‘I love you, thanks for teaching, what you do makes a difference.’ Really, how many people can say that? Yes, yoga gives you a stronger body, more flexibility, improves balance, and calms the mind. However, personally I found what I let go of was even more powerful than what I gained; I let go of seeking so much outside approval and the judgments I had about people and life. I have been able to forgive myself and others for things I thought would forever plague me.”
It’s a simple sentiment many people struggle to accept forever. And though she presents it with a certain ease in her tone, Grace didn’t come to this place in her life without struggle. She has, she says, all the same challenges as anyone: getting clear about who you are, understanding your strengths and weaknesses, grasping what and who you love in life.
And as high-minded as the pursuit of yoga can seem, one of her hardest learned lessons was a typical career lesson: acknowledging that her first business was failing financially.
“I love teaching and research. I did not like running a business, accounting, keeping up with social media, managing people. I kept thinking if I only worked harder… today, I salute all small business owners. It is hard work and profit margins are slim.”
So, Grace let Charlotte Yoga go, and kept moving forward. From where she sits today, what could have been a setback only brought her to a better place. She now works entirely on her own schedule, isn’t held back by needing to manage a business, and has a family she adores.
Born in smalltown Plainview, Texas, Grace’s upbringing was not an easy one. With little money in a rural area, her family often struggled. Grace did not get to see her mother nor grandmother live to 50, and the experience gave Grace even more reason to focus on health and well-being. Both her grandmother and mother, she says, lived high-stress lives and weren’t afforded opportunities to optimize their health.
“I want to learn everything I can in this great experiment I have going on. How can we take care of our joints, cardio vascular system and deepen our neurological connection to health? As I get older, brain health becomes more important. I am not trying to stay young forever. I know there are things that are out of our hands, however I believe there are choices we can make that will allow us to do more than just exist as we get older. We can use our hard-earned wisdom, creativity and curiosity to thrive.”
Back in Texas as a young girl, it was Grace’s interest in fitness that really gave her something to hold on to; a way to get out energy, occupy open-ended time, and connect with herself.
“As early as age 12, I loved learning different workout moves and why [the move] was good for me,” Graceexplains. “In the mid-seventies, there weren’t health and fitness publications, so I would flip straight to the little exercise section in Cosmopolitan Magazine and carefully read all the instructions. I studied the photos to copy the moves the best I could. I never really liked playing sports, but I loved the workouts. I joined the basketball team just to run bleachers, do sit-ups and sprint.” 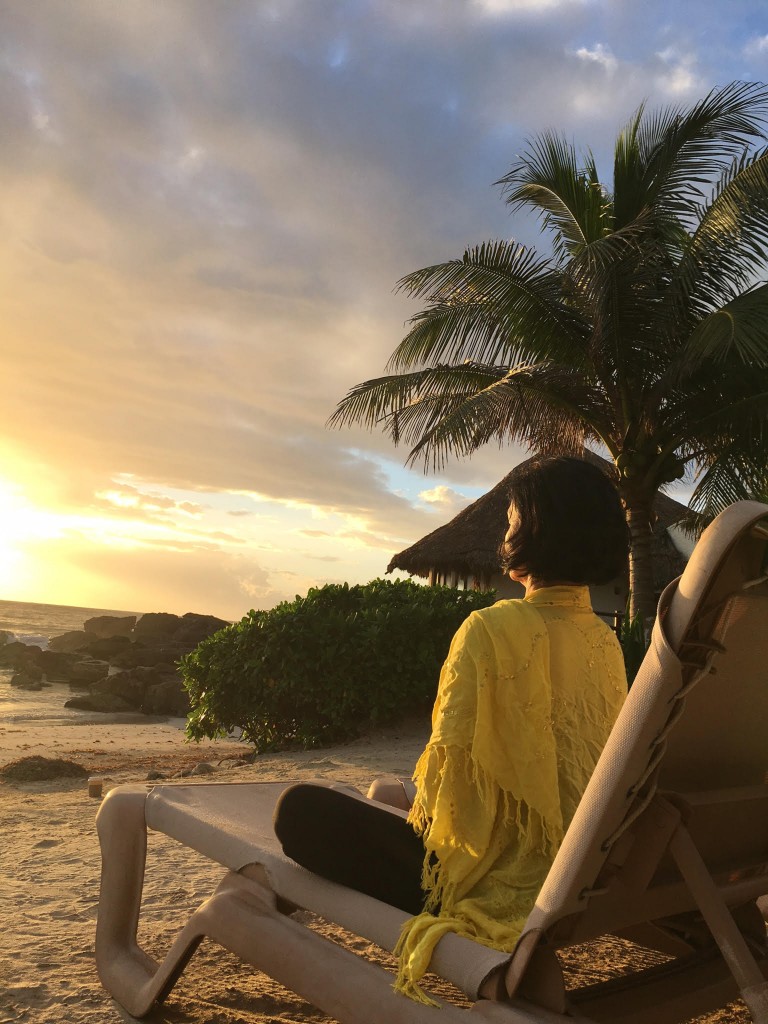 So, with characteristic determination, Grace continued to pursue fitness as she grew older and worked up the courage to leave behind her smalltown and its challenges. As an 18-year-old, she herself moved to Dallas and quickly tracked down the biggest, fanciest gym – run by the wife of the Dallas Cowboy’s strength coach, no less. She promptly showed up blind to an instructor tryout session, knowing no one and without a formal invite.
She was as surprised as anyone to have made the substitute list after tryouts, and proceeded to take on every undesirable class offered – early morning, late night, ones that involved a long commute at faraway sister studios. Yet before the year was out, Grace had her pick of the best classes, had befriended the owner, and even met and worked with fitness scene stars like Richard Simmons.
Fitness and exercise had become her biggest motivator by now, but Grace still had yet to encounter what would become her life’s work. It was while training for a marathon with a friend that she started to practice yoga seriously. She injured an ankle, and began hot yoga to give her body a rest from the impact of running, as well as to prepare for the heat in Hawaii, where her upcoming marathon was to be held.
While plenty of us incorporate yoga into existing fitness routines, Grace took it one step further – again, that characteristic determination that is practically bursting from her every fiber. She started pouring through books and texts and before long, was tracking down retreats and top-level teachers who would train her. Grace was not about to do this yoga thing halfway.
She met her first teacher, Bryan Kest (the creator of Power Yoga), at the White Lotus Foundation in Santa Barbara. As terrified as she was to go alone, when she got there, she recalls a feeling of being instantly connected with everyone else and sensing that she’d found somewhere she belonged.
She trained with other prominent yogis – Rod Stryker, Baron Baptiste, Rolf Gates and Sharon Gannon and David Life to mention a few – and traveled far and wide. She also has been traveling each year, for the last 15 years, to Tulum, Mexico as part of a group of teachers from Hot Asana Studio in Southern Pines. They now lead a week-long retreat there.
“Maya Tulum’s energy is what yoga retreats are made of,” Grace says. “The rooms are basic but located on the water, the food is healthy, and the yoga abundant. I love living in Charlotte, but when I get home [from Tulum] I have to readjust to not hearing water when I roll over in the middle of the night.”
Interestingly, with all her travels and all the teachers’ whose paths she has crossed, it is Grace’s own sister, Mylinda Morales, who Grace calls “her favorite teacher.”
Mylinda’s studio is Altamonte Springs Yoga in Orlando, and Mylinda also has her own yoga school. Together, the sisters support one another’s’ yoga queries and trainings.
And as for Grace‘s favorite place to travel when she has seen so much of the world?

My favorite trip is always the same the one, the one I happen to be enjoying now.

It’s that attitude that allows her to keep her flock close, look ahead, and stick to her signature: asking questions and refusing to settle. Change, she explains simply, is ongoing in life.
“My mother said when I was a kid, I would drive them crazy with ‘Why? Why? Why?’ I guess I am still doing that,” she smiles.
But no matter what does lie ahead, yoga is a career that has allowed Grace to connect with like-minded people and to build her family the way she wanted to. That, she says, is her biggest reward. It is also perhaps the one thing she was always seeking all along. Her daughter, Alexia, grew up in a strong community, surrounded by healthy, powerful women.
And then there’s Grace‘s life partner: “I go home to my biggest life highlight, my wife Ellen,” she smiles.
And where did the two meet, after both having had their hearts broken in the past and their lives turned upside down more than once or twice? In a yoga class, of course.

Find more and take a class with Grace at www.gracemorales.com