The French upperclass in the 18th century wore them. So did Winston Churchill, U.S. presidents, and even Colonel Sanders. In those by-gone eras the bow tie had a certain mystique about it. It was worn to evoke confidence and express a sense of uniqueness. That mystique is back. From the Carolinas, south to the Gulf of Mexico, or north to the shores of Bar Harbor, the classic gingham and tattersall patterns are once again frequently being donned around the necks of gentlemen. So too are more modern takes on the bow tie featuring new patterns, original artwork, and an almost infinite amount of colors. You can see them on Saturday evenings at a steeplechase or Sunday mornings in a church pew, you can see them paired with shorts or draped over a polo shirt. Hell, you can see them worn with camo. It’s very much about an original style, and the bow tie makers themselves will agree. However, for them this piece of fabric represents far more than that. It represents a lifestyle, intrinsic values, and a whole bunch of hard work and determination.

If you ask Charlotte, NC based fashion designer Lore Emelio what a man in a bow tie represents she will tell you, “He conveys the presence of confidence and character, a man in a bow tie is a self assured individual.” Lore has been designing fabrics and clothing from the ripe old age of 6 and in that time has gained a lot of confidence and character of her own. This confidence is embodied by all of her creations resulting in a seriously stylish and sophisticated line of bow ties and accessories that convey a spirit of distinction, quality, and self expression. Lore’s ties are all about the details. She uses Transparent fabric that reveals the inner seaming and construction – showing the caliber of quality and execution. Her collection is appropriate for the full spectrum of life – from every day to the very best society and bridal occasions. In addition to bow ties, Lore designs gentleman’s ascots & neck ties, as well as women’s hats, fascinators,headbands, and wraps. If you are an aspiring designer yourself, Lore teaches design classes offered at the Studio for Community-a state wide Intern program providing professional experience for students and recent graduates. loreemelio.com 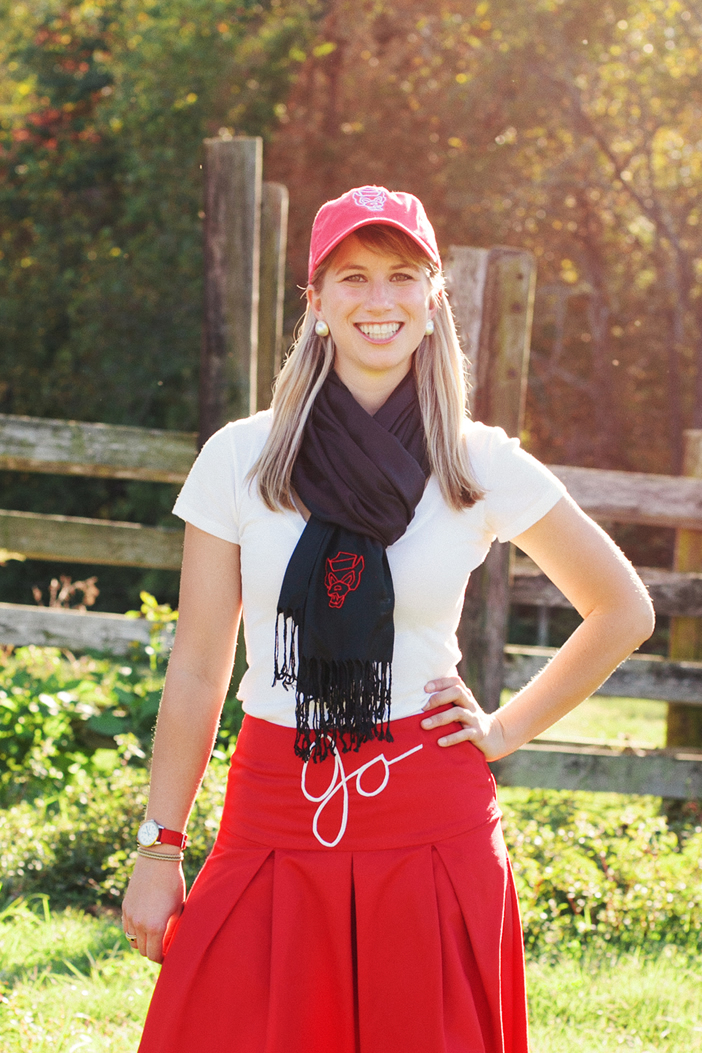 There’s only one thing that gets Southerners, and in particular, North Carolinians more excited than bow ties; their favorite college team. With that in mind, co-founders and siblings, Charlotte and Hunter Guice set out to design a line of bow ties and accessories that pay homage to both. It all started when Charlotte, a student at NC State designed and created a Wolfpack skirt to wear to her interview at the College of Design back in 2005. With countless inquiries about her skirt at numerous tailgates and events through the years, and Hunter’s love of bow ties, the duo decided to start a family oriented company (yes Mom and Dad help too) that defines the lifestyle and pride associated with being a die hard fan in the Carolinas. According to Hunter, “Olly Oxen products are made to appeal to peoples sense of pride, pride in where they are from, where they went to school, and where their roots are.” Their goal is to create products that have range and embody the culture that is Carolina-classic, unique, southern and versatile. Charlotte laments about her childhood saying, “That’s how we grew up-doing anything from driving a tractor with a brush hog to hosting a nice dinner party.” Their products allow you to move from something as simple as tailgating to a formal occasion while still feeling confident in how you look. As of now their bows come in gingham; but seersucker, plaid, and houndstooth versions are in the works. The best aspect about Olly Oxen is that all of their products are made right here in Charlotte! In addition to bow ties they make belts, hats, visors, scarves, skirts, shoe clips, koozies, and even onesies.
ollyoxen.com

These bow ties should have a label on them that reads “Made with love”, because that’s exactly what North Carolina native, and High Cotton co-founder Judy Hill has been pouring into them since day one of the local company’s almost meteoric rise. Love for her sons, love for her southern roots, love of her local economy, and most of all love of life. Judy first started hand making her cotton bow ties for her eldest son while he was in med school. Before you knew it, the majority of the other students, interns, and residents were wearing them too. That was just the beginning. She then started sending bow ties to her other son James, president of his fraternity at UNC-Chapel Hill. His friends quickly took notice and wanted to know where they could get their hands on the beautiful bows too. That was when Judy and James knew that they had stumbled upon a great business opportunity. Now, the mother and son team are selling their all cotton, washable bow ties on over 50 college campuses across the South and Northeast, and are carried in over 100 different retailers and counting. They are the first company since the 1940’s to make all cotton bow ties, and they do it with style, using old southern staple patterns like gingham, tattersoll, seersucker, and madras. James sets out on the road every week to sell and grow the brand, while Judy is back home steering the ship she built all the while making sure she does her part to give back to her beloved state. In addition to making a wonderful sustainable product, Judy and James have made it their mission to support the local economy and reinvigorate the textile industry that once flourished here. They’re doing a pretty darn good job at it too. The Charlotte based company does all of their manufacturing in a retro-fitted textile plant right here in the Old North State, and they support local farmers by using North Carolina grown cotton for their tee shirts and polos. Even though it’s a lot cheaper to manufacture overseas, it does their hearts good to know that they are making a better quality product for the consumers, and helping to put food on their neighbor’s table. While this is a great story that makes you feel good, what will make you feel even better is to go out and get one of these all cotton bow ties, wear it to your next social gathering , and see the reaction you get. highcottonties.com

When your bow ties are carried in two of the highest caliber of haberdasheries in Charlotte like Taylor Richards & Conger (consistent winner of Esquire Magazine’s coveted ‘Best of Class’ Gold Standard Award) and Fairclough and Co., you must be doing something right. What R. Hanauer is doing is creating a line of gentlemen’s bow ties that have gained the reputation of being the “best tying bows” in the business. Getting his start as a distributor’s representative for some of the finest tailors and luxury designers in the country like H. Freeman and Trafalgar; R. Hanauer founder, Randy Hanauer knows what it takes to create a brand of high quality and style, while still staying true to his Carolina roots. When he noticed there was a niche to be filled in the market, he took the opportunity and began manufacturing cotton pocket squares. Later, Randy recognized a similar niche to be filled, and began manufacturing bow ties. As the business began to grow, his son, Randall, joined him in the pursuit of creating the ultimate bow tie and continues to be a driving force in the growth and evolution of the business. All of their bow ties are produced in their workshop in Fort Mill, SC, and the majority of their silk products are made there as well. They take pride in the fact that they employ local workers and support the local economy. Their bow ties put a lot of emphasis on striped designs. They offer a half inch bar stripe that comes in 30 color combinations, many of which represent university colors and do very well in their respective college towns. To them, bow ties represent a resurgence of the well-dressed man. ZZ Topp said it best, “Cuz every girl’s crazy ‘bout a sharp dressed man.” bowties.com 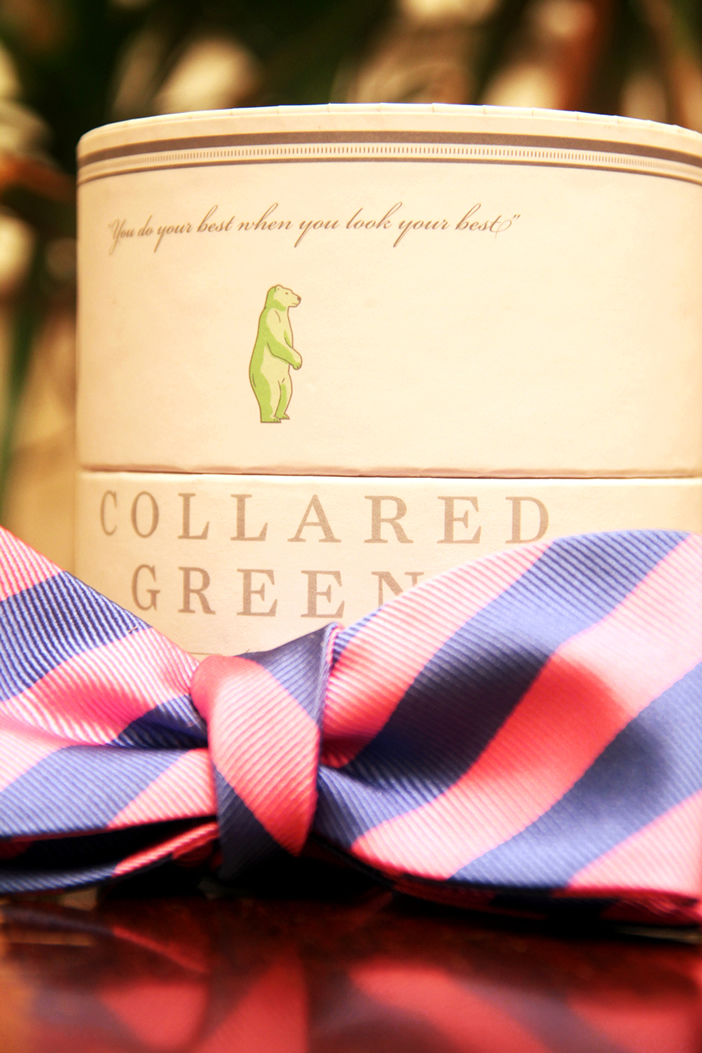 What do North Atlantic Salmon, endangered polar bears and bow ties all have in common? Everything according to Collared Green’s co-founders and Carolina natives, R. Randolph “Randy” Ashton and Jeremy Bull. The idea to manufacture “green” clothing for trendsetting and fashionable folks came to Randy while on assignment to photograph the great Atlantic salmon rivers for the North Atlantic Salmon Fund. All of their clothing is produced, marketed, and packaged in an environmentally-sensitive manner using all organic materials. Their mission is to create jobs in the US (where they do all of their manufacturing), donate every year to different conservation funds and of course, to put some style, class and personality back into men’s fashion. Randy says, “If you can pull off a bow tie, you can pull off anything.” Their bows come in fresh new striped and paisley combinations you can’t find anywhere else and they are touted for there high quality. You can find these beautiful bows in Charlotte at Fairclough and Co. or The Good News Shop. Just keep your eye out for Marvin Leopold, the green polar bear on their ultra cool and environmentally friendly bow tie boxes. collaredgreens.com