Raised on the fringes of metropolitan Charlotte and in the shadow of great loss, LeMond Crayton-Hart has shaped himself into a veritable minister of fashion and a role model for young Charlotte.

Braces, cufflinks, and custom jackets are cool. Tailored clothing, impressionable accessories—the uniform of the classic man has never not been cool. Charlottean LeMond Crayton-Hart knows it, and his evangelical approach to vintage men’s fashion looks well-poised to remind the Queen City. LeMond’s acquisition of style has always been a spiritual journey, and now his secondhand haberdashery The House of LeMond is his pulpit. With a Monroe Road business expanding in several directions, LeMond’s found his niche, his purpose. Like too many success stories, though, his isn’t without its hardships…or without tragedy.

Born and raised in Charlotte, LeMond Hart was 12 years old when he walked in on the scene of his mother’s murder. It wasn’t just a west Charlotte home intrusion—a man with a knife invaded LeMond’s childhood, his innocence, sending an impressionable little boy on a search for tough answers far too early. What LeMond calls his “rebellious years” were reactionary, but not with your typical, adolescent grumble. He was faced with a sadness his peers didn’t have time for: The world’s pretty dressings had been torn asunder, and LeMond struggled to find a patch.

A lot of social issues might be solved if everyone would just look like they want to solve them.

And there seemed to be no escape from the throes of the bad neighborhood. After his mother’s death, he would spend the remainder of his childhood in one of the most crime-ridden projects in the city. The sounds of life there often sounded more like the loss of it: A horrible symphony of sirens and gunshots were not only cruel reminders of his own personal tragedy, but they were also constant warnings of still more woe around him. 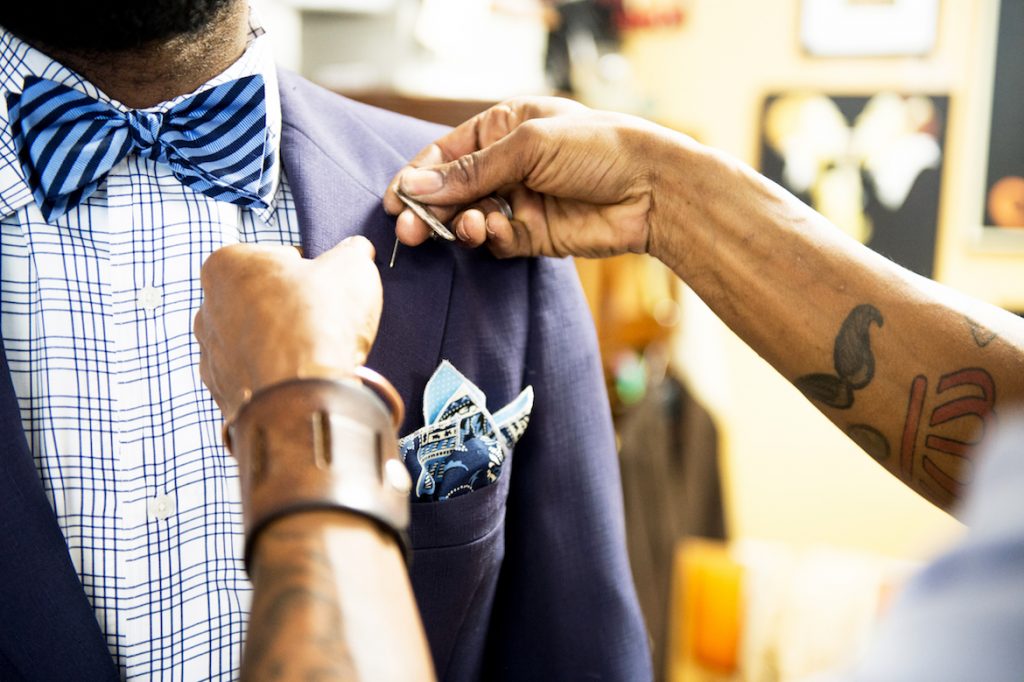 Even in the worst places, though, small consolation can be found. Due to a few caring souls in Lemond Hart’s life, what might have been a solemn stagnation became a time of steady growth. His grandmother’s fixed-income household was a serviceable refuge for him and his older sister, affording them all the warmth and support of close-knit family if not the luxury of a complete one. Most importantly for LeMond, her various efforts toward reclamation of her scarred grandson’s childhood were ever-so-gradually successful. She enrolled him in extracurriculars and, with the help of her neighbors, ensured he regularly attended church. As best she could, she raised him the rest of the way, but not without help from some other mentors.

Somewhere between Sunday school and marching band practice, LeMond found God and fashion. He’d always known the former, just not yet closely, but the latter was as excitingly otherworldly as anything junior high disillusionment offered. Band class, though not LeMond’s favorite subject, exposed him to another sort of class. It wasn’t the trombone and tasseled uniform thrust upon him that gave him pause, but his band teacher’s offbeat uniform: “Brooks Brothers button-downs, tailored suits, and a brand new Honda.” LeMond respected this man with the baton and the bowties, even if he couldn’t quite get behind Mr. Larry Lane’s brass cacophony. The way Mr. Lane conducted himself woke something in LeMond. The gift of his first GQ Magazine and basic lessons in outfit construction gave a silent, detached eighth-grader some creative voice for the first time since his mother’s death. LeMond notes the simple sophistication of a planned outfit and the authority and dignity it commands: “I saw that in my teacher, and I wanted to emulate that everywhere I went.”

I’m just doing the work of the Most High with bow ties.

Dressing up for church made sense all of a sudden. One’s dress, he discovered, is a display of respect—not just an acknowledgement of custom but a reverence for the institution, for fellow churchgoers—a means of “speaking with the Most High” Himself, in a way. Young LeMond found happiness in this ritual: Sharp Sundays encouraged by Grandma Gaiten and dapper weekdays at school prompted a lifestyle shift, a turn from teenage quietude toward an adulthood of loud self-expression, a joyful noise of pattern and color. It was with his mentor’s instruction that LeMond Hart really learned to “put his best foot forward”—practically a trademark, now, of The House of Lemond—but his faith would ultimately inspire him to share that concept with others. 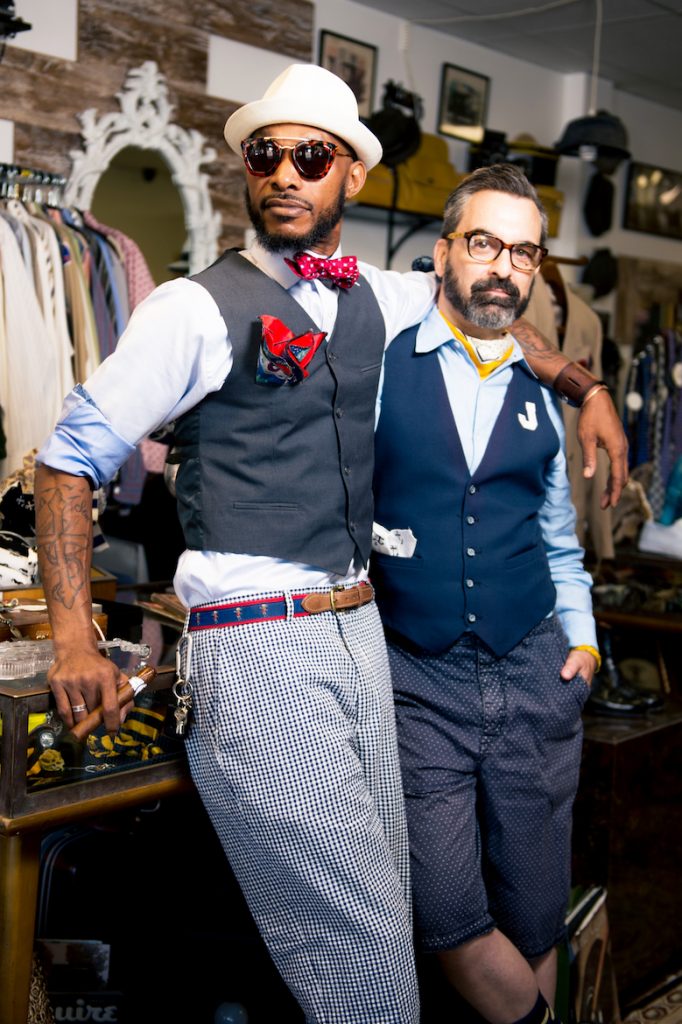 Today, LeMond’s shop is full of countless incredible pieces, but The House of LeMond’s sizeable (and affordable) exposition of vintage pieces is nothing without its owner’s thoughtful, missionary-like curation, both in the store and within his community. An economically disadvantaged upbringing taught LeMond the “value of thrifting,” and he goes to great lengths to keep his doors open to thrifty young men. He sees himself in his clients, and his business is built on his determination to help them “live in their moment.” One client opined that an afternoon in LeMond’s shop made him “feel like a star, like he was the most important person in Charlotte,” and LeMond insists that’s exactly what the right clothes can and should do.

“Fashion is my ministry,” LeMond shrugs. “I’m just doing the work of the Most High…with bow ties.”

With the support of his husband and fellow curator Jerry, Lemond is constantly evolving his shop. He’s in the business of making great first impressions, and he hopes his mark on his community will be one of boundless positivity.

A tragic past and hard times aren’t a black shroud for LeMond and his House because  he’s allowed himself to grow from them. They’re just a couple stitches in a well-tailored suit, just individual parts of the things that “make a man.” LeMond and company seem convinced that where we’ve been—the toils of the blue collar work week, the throes of bad neighborhoods—doesn’t define us. What we show the world does. Our boldest sense of who we are, in the most tumultuous of times and poorest of circumstances, especially, must be put on display.

“A lot of social issues might be solved if everyone would just look like they want to solve them,” he stresses.

Socially, how we present ourselves can tip more scales than one, and LeMond insists that fashion may be the perfect equalizer. Deftly straightening his collar and bright, multicolored tie without a mirror, LeMond grins. “Who wants to fight in a bow tie?” 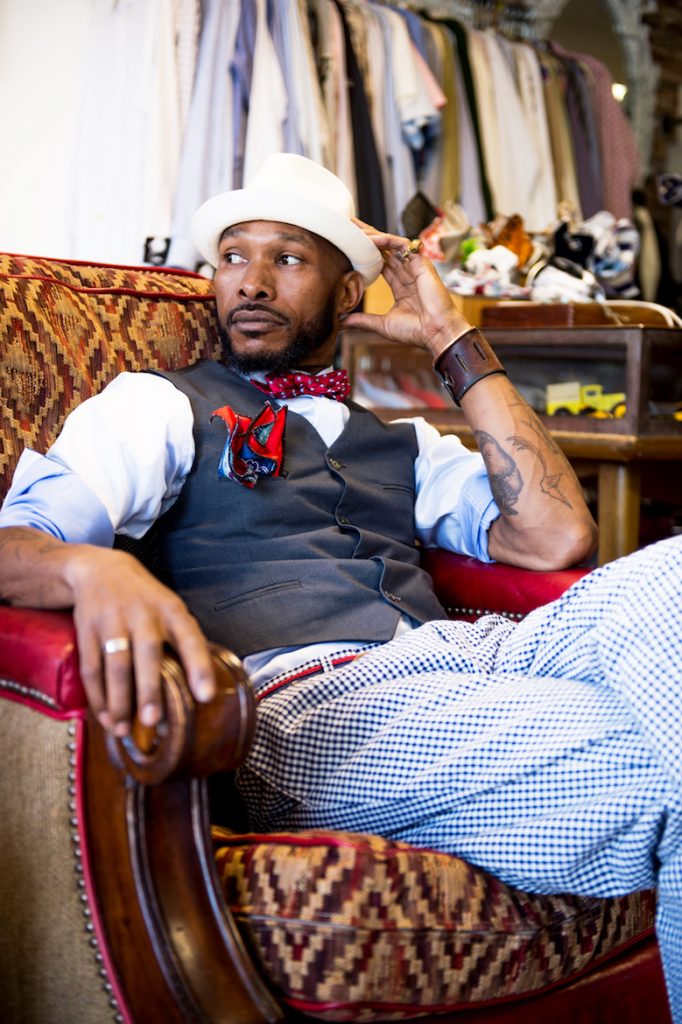