Owner Stan Fraser of Straight Stitch & Co. reached notoriety in Charlotte and beyond for his selvage denim designs. Those who seek out custom denim pieces appreciate Stan’s ability to “do innovative things with an old fabric.” When you enter his industrial storefront at The Foundry you expect to see heavy denim, raw threads, and carefully crafted leather accessories. However, one corner of Stan’s storefront is getting a feminine facelift with a burgeoning new product—Kustom Klutch.

Three years ago, Jordan Fish was working next door to Stan. A brief encounter and conversation outside of Straight Stitch & Co. led to a quickly blossoming friendship. They joked about creating their own line of ladies’ clutch bags. It was merely an idea. When Jordan wanted to establish a new direction in her career, though, their concept became reality.

Both Stan and Jordan agree it’s a solid partnership because of the differences in their personality and talents. “That’s what makes us get along, I think,” Jordan explains. “I can read him, and he knows me.” Even to an outsider, it’s an effortless relationship: They finish each other’s thoughts, interjecting and correcting one another in the most jovial of ways.

You think of an idea you love and you don’t actually think it’s going to come to fruition. When it does, though, it’s surreal.

While the craftsmanship is all Stan, he credits Jordan with the ideas for each bags. “The thing is, because I like her style, I let her drive,” Stan laughs. “She’ll come in here with all sorts of leather and ideas.” A girlfriend to Nascar driver Denny Hamlin, Jordan has to drive around quite a bit. During race weekends, she struggled moving around the track with her three year-old daughter and various bags. She discovered that other women around the track had similar problems. Jordan decided on a whim to meet the demand, creating a small, stylish bag that she could use on the track and on pit road. With Stan’s expertise, she was able to rid herself and her fellow Nascar moms of unwieldy purses and overfilled pockets.

Now, their line of clutches reaches far more than the frequenters of the racetrack. Jordan chooses the fabrics, trims, and accessorizes, and allows Stan to do the rest, confident that “Stan can make anything.” While he’d already made leather and denim bags for his line, there was a bit of a learning curve with the clutches. “Dealing with the different textures and the trim has been the tricky part,” Stan explains. “It’s been new and challenging. Normally I’m doing denim. I have to make this while really thinking about the gentleness of women.”

They began with a “starting lineup” of about six bags, ranging in price from $55-$85. Customers choose between patterned fabrics, buttery leather, and stiff calf hair, as well as trims and accessories like tassels or poms on the zippers. According to Jordan, they seek to “provide a flavor for everyone — it just depends on what your style is.” They continuously add new designs as Jordan encounters new fabrics while shopping around. Kustom Klutch will also expand to include men’s items, such as computer and tablet cases, in the near future. True to the name, they will also offer customization on the website, allowing customers to “build their own bag” by choosing the fabric, zipper, trim, and accessories.  They also attend events, making bags on-site, so customers can pick up their custom bag on the same day. As an added bonus, ten percent of their proceeds benefit a different charity each month, details about which can be found on their website. “I think it’s awesome when businesses support other brands and organizations,” Jordan says, “and I think it’ll be good karma for us.” 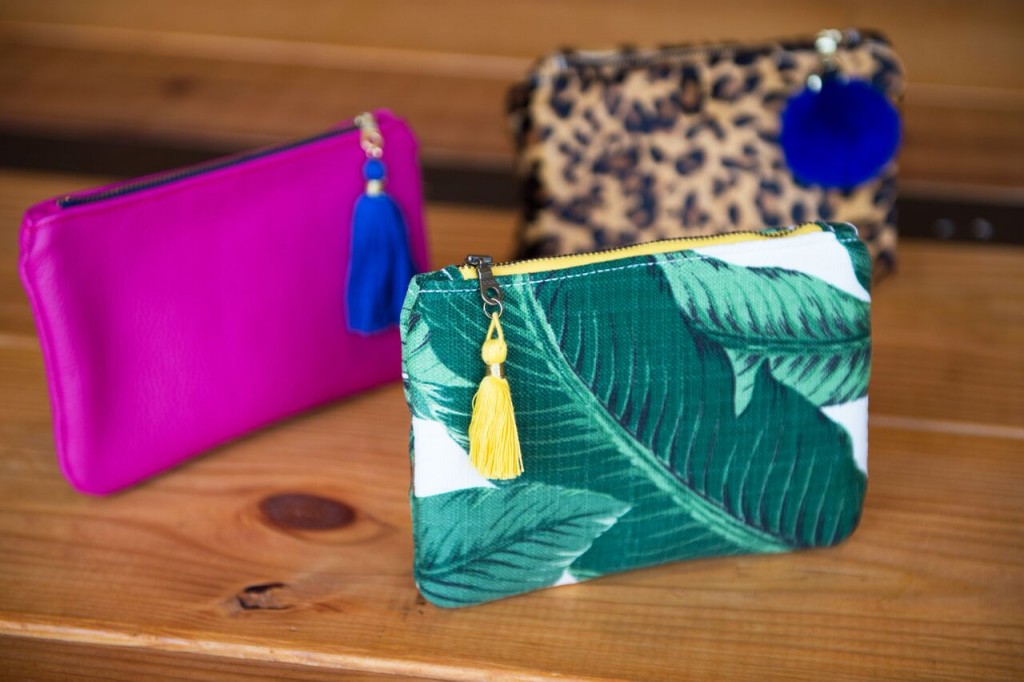 Their strategy seems to be working, too, because the clutches have had an overwhelming amount of support. Jordan’s Nascar contemporaries are clamoring after a clutch of their own, and whenever someone orders one bag, they usually end up wanting several more. Jordan and Stan have already sold out of a few patterns, but that shortage won’t last long — many others are on the way.
“I just don’t think things like this happen this easily every day,” Stan says of the business’ instant success. Jordan blithely agrees, “You think of an idea you love and you don’t actually think it’s going to come to fruition. When it does, though, it’s surreal.”