Considered “Nectar of the Gods” honey was also called “Ambrosia.” Fossils of honeybees have been discovered dating to the Neolithic Age; prehistoric carvings dating from 7,000 B.C. have been found depicting man’s enjoyment of honey eaten straight out of the comb. Ancient cultures from near and far have enjoyed honey so much that it has been included in ancient texts such as the Koran and Torah; depicting its delight and use as a commodity. A lesser known fact is that honey has medicinal uses. Hippocrates noted its use as an expectorant to clean wounds and because it produces a small amount of hydrogen-peroxide when it comes in contact with moisture, honey aids in fighting bacteria and cures skin infections.

The mere mention of the word honey conjures images of delicious, golden sweetness. As a child, plastic teddy bear jars filled with honey and wearing yellow hats called to me from the top shelves of the baked goods aisle. It now takes on a different meaning to me.

Arriving outside of Cloister Honey – Joanne and Randall’s home – I was struck by the neighborhood and surrounding landscapes. A sense of warmth and intimacy emanates from the nearby homes as the trees sway, the flowers bloom and the birds chirp. In the front yard is a small sign, “local honey for sale”. Interestingly, the buzz of bees is not heard.

Joanne greets me at the door and leads me to the kitchen. It’s warm and bright. The sound of dogs barking behind closed doors reminds me of my three whom I had left hours earlier, peering out the window, as I drove away. 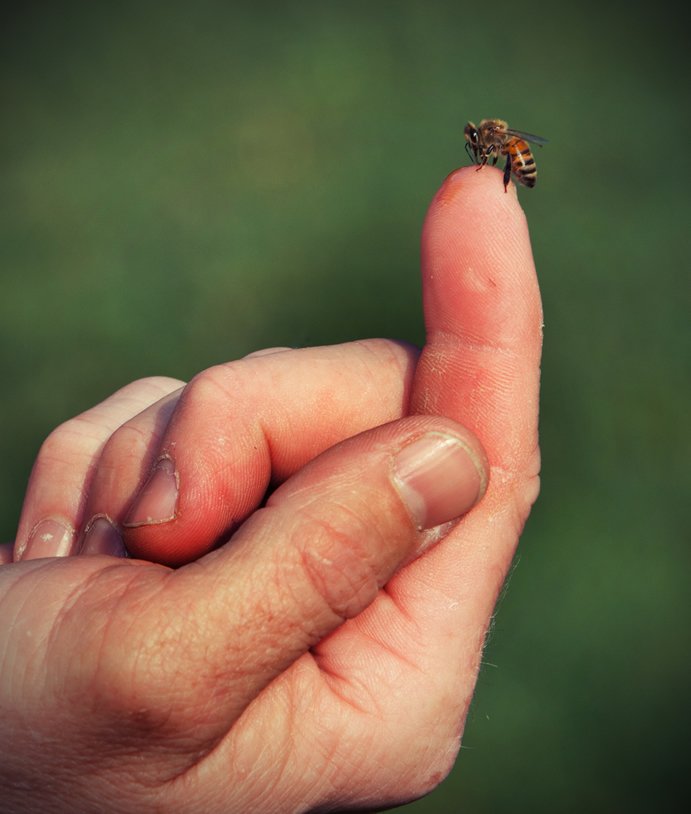 “Oh, we have three: Gus is a beagle, Satchel is a mutt with low self-esteem, and Petty is a Chihuahua. He thinks he’s King-of-the-Castle. Do you have any?” Joanne asks.

Sitting at the bar in the kitchen is Randall, beekeeper and the man in charge of products for Cloister Honey. His counterpart, Joanne, is a banker but she is the mastermind behind color and design. They make a good team sitting across from each other discussing the company’s plans, directions and product.

They explain, “It’s a separation of duties. We make it a point not to track over each other.”

Joanne recalls that about five years ago, “It started as a hobby and grew rather quickly,” Randal shrugs his shoulders and says, “I go to the extreme.”

She continues, “This started as a hobby, and now he’s giving me all sorts of reasons why we need more hives.”

“The first year, we had one; the second year a couple more. By the third year the trouble started. We had 10-12 hives, and they produced 60 lbs. of honey,” continues Randall. “I have a moving company, so we’d give a 4 oz. bottle of honey away to some customers. A neighbor of ours wanted 42 bottles of honey for her friends at the rest home. She even said ‘I’ll pay you.’ That was different.”

After filling their first order, Joanne and Randall expanded to the Farmer’s Market on Trade and Tryon. They’d take live bees and set up an observation hive that drew a crowd. Another honey retailer joined the market and sales dropped, so they decided to experiment with specialty honeys to set themselves apart. Cloister Honey already produced wildflower, sourwood, and tupelo honey, but whipped honey infused with a variety of flavors was different.
Whipped honey is “amazing.” Joanne says. “Pure crystallized honey, some with flavor and some without. We force the honey by whipping it; it’s like a starter for baking. We use cinnamon, lemon zest, and vanilla. Fall of last year I thought why not try pumpkin spice? The taste of pumpkin pie was a hit. Then I tried cocoa. Not the same sweetness as chocolate but kids love it and it’s great on apples, bananas and bread.”

Without realizing it Randall’s hobby turned into a business. “Yeah, we had no clue of what happened until a few years ago,” he says. “It took us completely by surprise.”

Looking for places to merchandise, Joanne and Randall went to PF Chang’s China Bistro just around the corner and introduced their product. What really got their attention was an email they received requesting samples for a national meeting they were attending.

Randall sits on the bar stool, fidgeting, fueled by an unknown energy. Empty mason jars with the company’s label are juggled back and forth. “These labels are dishwasher safe. They won’t come off at all. It’s great.” He oozes with excitement about Cloister Honey and explains further. “Honey production starts in mid-March when the nectar starts flowing and ends the middle of July. In mid-June, we transport the bees to the mountains where they collect the nectar needed to make sourwood honey. We keep them there for about four weeks, and then we go back to the mountains and bring them home. Our other hives are housed around Mint Hill, at the Johnson and Wales Cooking School, on top of the Ritz-Carlton as part of the urban green movement, in Cloister Honey’s warehouse, on various friends’ farms around Charlotte, and near the railroad tracks where wild blueberries, blackberries, clover, and other brambles grow rampant. It’s great. The bees are happy and they thrive.”

Back To The Cloister Honey Hive

Heading out to the backyard, I make it a point to stay as far away from the hive as possible. I wasn’t going to chance it and had brought my EpiPen with me just in case but there’s something about Randall’s demeanor that puts me at ease.

“About twenty.” I hear a couple of four-letter expletives fly as Randall is stung 3 or 4 times. He leaves the hive and goes around the corner to grab his veil; a headpiece that hangs to his shoulder and has a screened face piece that keeps the bees out. 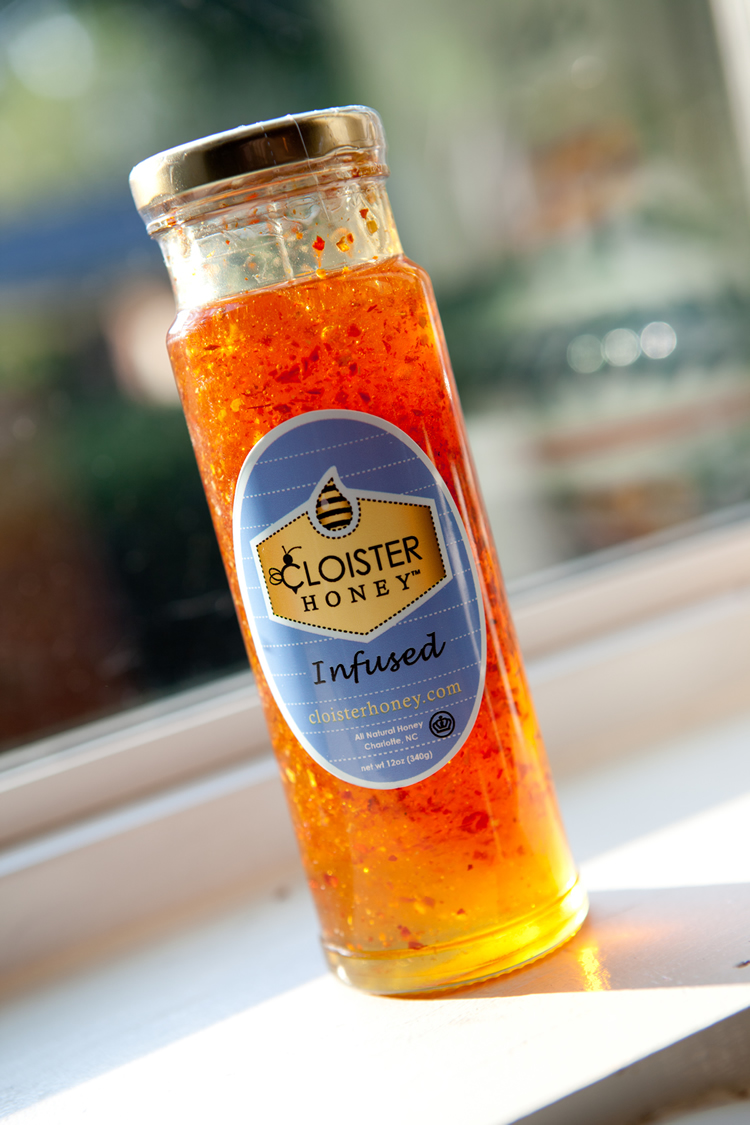 “Oh… yeah. I was stupid for not putting on the veil before opening the hive. You don’t want to get stung in the eye ‘cause it’s real dangerous. They can crawl into any crevice. It’s one thing to go up your pants leg and get your ankle; it’s another to climb a little higher,” he chuckles. At this particular moment a bee is perched on the tip of his finger tasting residual honey. “It’s a parlor trick,” he says grinning.

Joanne doesn’t get too close to the hives either. She looks at me and says, “If I get stung, I swell up. So I let Randall work the hive. He’s the thief in the night.”

Randall takes a comb out of the hive. It’s covered with honey and bees. Bug-eyed, I back up. Joanne turns and says, “When they sting it smells like bananas, that’s why it’s not good to eat sweet smelling fruits around them. It produces a distress pheromone. But if Randall lights the smoker, he’s fine. Smoke disguises any threatening pheromones.”

Randall replaces the comb and we head back into the house. “So tell me, how does the hive work?”

Randall gets a mischievous look; the kind a little kid gets when he’s bursting at the seams to share an ill-fated secret. He leans forward, perched on the edge of his seat, and says “Well there are about 40-60,000 bees to a hive. The Queen and the worker bees are female. The male drones make up only 2-5% of the hive. The drone’s only function in life is to mate. So, in the spring and summer, the drones leave the hive and go to the DCA.”

Noticing my puzzled look, Randall of Cloister Honey explains that the DCA is the Drone Congregation Area. The Queen, who is capable of flying twice the distance as her drones, struts her stuff, flying up and down in the DCA. The drone, who can smell her, hooks up in mid-air and they mate. As the drone completes the act he “literally explodes,” says Randall. “He dies with a smile on his face and hits the ground dead.” Typically, the mating dance can occur as many as 10-25 times in one session. “She gets her groove on and then returns to the hive and lays her eggs. The worker bees, all of which are female, proceed with ruling the roost. They do all the work,” says Randall. “Women love that.”
“That’s no surprise,” Joanne chimes, “and, all the men do is what, mate?”

The worker bees work themselves to death protecting and assuring the hive remains strong and healthy. They decide who does what job. Because a bee’s life span is only 42 days, maturation occurs quickly. The brood nests for a week and remain babies for a day or two. Then their job moves to feeders of babies, foragers, wax builders, undertakers, or attendants to the Queen. As a bee grows older she moves farther away from the hive and will leave the hive in preparation for death. If she is too sick or has too little energy to leave on her own, the undertakers help carry her away. In preparation for wintering over the worker bees kill the drones. They’re savage. They pluck their wings and toss their bodies out of the hive.

Protecting the hive from invaders is another worker bee job. “I’ve seen a bumble bee that had caught the scent of honey and tried getting into the hive be targeted by the worker bees,” explains Randall. “And in two seconds they’re dragging him off, killing him.”

Joanne and Randall begin gathering jars of honey. The counter is lined with soft gold wildflower, darker gold sourwood, tupelo, and various whipped honeys – ones with lemon zest, cinnamon, pumpkin spice, vanilla, and hot chili pepper. Each has a distinct color. Each tastes better than the next. “Oh my goodness, they’re all so good. I can’t decide which one I like more,” I say.

I ask why they enjoy beekeeping. “That’s easy,” says Randall. “The people we meet; the small business owners who understand each other. There’s no red tape in a small company. There’s a force through fire to make decisions. And face it, I’m such a nerd. I love keeping stuff alive. I love reading. You know I was a banker for twenty years, but nerds are going to take over the world. That’s what I keep telling Joanne.”

“What do you see happening with Cloister Honey?” I ask. Randall rubs his hands together and says, “We want to make gobs and gobs of money.” My jaw drops with his unexpected response. “No, no. I’m just kidding. At Cloister Honey we want to take it as far as we can. Specialty honey is where we’re focusing our energy. We don’t want cheap, and even though this limits how far we can go, it’s okay. People will ultimately seek out quality. People will find you if you do quality. Cloister Honey is already being used by several local restaurants in Charlotte: Whiskey Warehouse, the Wooden Vine and Local Lime. Dean and Deluca carry our honey and Mast General Store does too. We’re even selling tee-shirts.” Joanne shows me the one she’s wearing. A pretty pink tee that says, “Smoke ‘em if you got ‘em.” A couple on the table read, “Got Stinger”, and “Get buzz beer.” What fun!

It’s after 11 o’clock and the morning has flown by. I thank them for having me, truly impressed with this experience. Two hours later, I pull into my driveway, grab by stuff and walk into the house. Tossing my handbag and notebook onto the table I grab the jar of cinnamon honey Joanne gave me before leaving their home.

“Well,” I say to myself, “I deserve a break… how about a cup of coffee and something sweet?” I make some toast and pop the lid. The Cloister Honey is rich and dark, the aroma engulfing. I slather my toast, take a bite, and close my eyes wanting to enjoy every minute of the experience. This must be what it’s like to run shoulders with the divine.