Trends in the food industry change based on popularity.  What makes one restaurant different from another is its philosophy. According to Cassie Parsons and her business partner, Natalie Veres, a farm-to table model is of the upmost importance.  That is what you will find when you cross the threshold of the Harvest Moon Grille where Parsons is Chef and Veres is Baker.   But their responsibility goes even farther than the mere running of the restaurant, for the two women also co-own Grateful Growers Farm, 10 acres located in Lincoln County, NC where Tamworth Hogs, St. Croix sheep, and American Chinchilla rabbits are raised.
Harvest Moon Grille and Grateful Growers Farm came about based on a specific philosophy the two women share.  Tired of not knowing what went into the food they ate and recognizing the fact that the industrial food system was broken, Parsons and Veres decided to focus on local, seasonal, sustainable foods sourced from within a 100 mile radius of Charlotte. 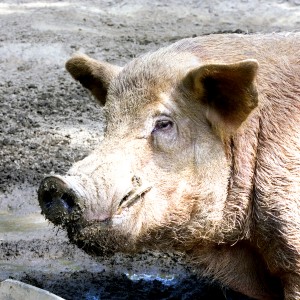 As a result, what some restaurants consider a trend is actually a life-style for them, focusing on quality food which in turn enhances the quality of life.  Utilizing locally grown produce, Harvest Moon Grille buys only from farms that do not use chemical herbicides or pesticides.  The hogs and other animals raised on Grateful Growers Farm are free of altering hormones, antibiotics, and Ractopamine (a drug that increases body mass and which is banned in Russia, the European Union, China, and Taiwan). Also, no fillers, preservatives, nitrates, or MSG are found in the feed.

Raised on a small farm in Ohio, Natalie Veress first business stemmed from a 4H project where she raised and took care of 300 laying hens and sold the eggs for profit.  Farming was in her blood.  Thats why it made perfect sense to join forces with Parsons, a woman she admired and shared common ground.

We chose to raise pork after attending a conference where we learned a great deal about sheep and pork, says Veres.  The pork won.  It has a ready market, and the size of the hog provides a sensible yield for the farmer.  Other farmers were very helpful, giving advice and directing us on breeding stock.  And Cassie, being a Chef, knew the market; it was the right thing to do.  Choosing the Tamworth hog was an easy decision for Veres and Parsons.  It is a hearty hog that has been bred in the United States since 1882, but used globally since the 1600s.  The Tamworth hog is very maternal, suited for outdoor living, is not aggressive, and has a strong immune system.  I enjoy keeping the gene pool alive, says Veres.

The hogs are allowed to wander freely–roaming, rooting, and playing.  Shelters for shade and protection from the weather are scattered throughout the area.  On average, there are 100-130 hogs on the farm from babies to top hogs to sows and everything in between, says Veres.  I have a selective breeding stock, and one to two boars.  Males are castrated at one week because of the musky secretions they produce that changes the taste and texture of the meat.

Veres has specific females she has chosen to be mother pigs, all of which are named.  Breeding is done naturally with no artificial insemination.  I control who is with whom and the timing.  I like two sows to be farrowing at the same time, so if there is a problem, theres a surrogate for nursing or whatever problem may arise. 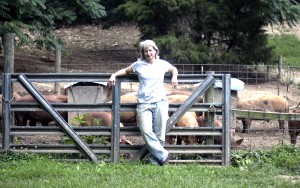 The production model we adhere to, says Veres, is to wait until the hogs are eight to nine months old and weigh about 300 pounds.  The meat tastes best at this point in their development.  Suckling pigs are too young and do not have enough fat to flavor the meat, while with older hogs, the meat is tough.  Hogs have a phenomenal metabolism and put on weight quickly. Our full size hogs weigh as much as 700-900 pounds.

When its time to slaughter, the hogs go to a local processing plant.  I have a great deal of respect for these guys, Veres says.  Every time I take them to be processed, I get emotional.  There is a reverence about what theyre doing for me and the community as a whole.

Grateful Growers Farm does not focus as most American agribusinesses do on speed and profitability, but rather, the farm focuses on quality food, quality of life, and the need to be economically sustainable.  The animals are raised outdoors among rolling pastures in an environment that provides less stress, and a habitat that is conducive to growth and wellbeing. Because of this health issues are not a big concern.  This cant be said about the larger companies where hogs are penned in small spaces and germs spread quickly.  Our hogs soak up the sun, breathe fresh air, and get plenty of exercise, says Veres.  We might have an issue from time to time, but nothing compares to factory farms where the mortality rate runs high.

When the chores are finished Veres doesnt relax on the porch; she dons her Bakers cap and heads to 235 N. Tryon Street in downtown Charlotte where she practices the art of bread making at the Harvest Moon Grille.

Starting a restaurant was not in Cassie Parsons plans.  In 2004, Parsons began selling locally raised pork from her ten-acre farm she owns with Natalie Veres.  From farm-to-market, five years later, she took the next step and started selling from an upscale food truck.  The food was delicious and developed a following, one being Craig Spitzer, Manager of the Dunhill Hotel.  At the time, Spitzer was looking for a new restaurant to open at the Dunhill. Approaching Parsons with the idea of taking her food truck to the next level, she agreed.

As Chef of the Harvest Moon Grille, Parsons dream is to provide a sustainable community through the use of locally grown and farm raised food sourced within a 100 mile radius of her location.   With the success of Harvest Moon Grille and her future plans in the restaurant industry, Parsons is well on her way to making that dream a reality.

Having grown up in Florida among a family of chefsnot working chefs, but chefs none-the-lessParsons migrated to Boone, NC where she attended Appalachian State University.  While working at a little café, she fell deeply in love with food and wanted to change direction.  I pursued a culinary career, but about 12-14 years ago, explains Parsons, I removed myself from the culinary world because what was coming in the backdoor wasnt what I wanted to see.  The work ethics were pretty bad. Chefs were more like little robots that came to work preparing the same meals day-after-day when all they wanted to do was leave.

Working in the organic landscaping business eventually brought Parson back full circle.   Changing a little piece of the world where I live is important, she says.  After running a feasibility study, Parsons realized that if a tiny pocket of restaurants only bought within a 100 mile radius, not only would they provide clean foods, but they would also generate jobs, make the area viable, and create a team within the community.  In todays age when technology has the tendency to isolate, Parsons philosophy helps renew an age-old truism.

The menu at Harvest Moon Grille is simple and rustic.  Redecorated to suit the menu, the décor is aesthetically pleasing, and the food is affordable.  We are not here to rake people.  We price accordingly, wanting to give value for money spent.  Normal is not in our vocabulary.  You wont find Dukes Mayonnaise on our tables. We make our own.  Those who come will taste the food and say, Wow!  I promise when you leave you wont have that heavy, lethargic feeling.  You will be full; however, youre eating clean, so your body responds differently.

With the success of Harvest Moon Grille, Parsons and Veres are now looking towards the future.  Within the next six months the Farmer Baker, Sausage Maker will open in what was once the old gas station in Lincolnton, now the 36th Street Bakery.  The building is 100 years old.  Were excited and hope to revitalize the community.  It will be a retail/butcher shop with a small capacity restaurant that seats about 20 customers.  By December 2014, we anticipate having a Bakery/Brew Pub opened that offers cured meats (USDA inspected) and retail store plus an open kitchen. I dont want to say anything else because were still in the preliminary stages, but I will say that that these guys make the best beer Ive ever tasted.

The philosophy of using only locally produced and raised foods is a teaching tool that both Parsons and Veres live by.  Other than oil, salt, and pepper, nothing else is imported.   Considered a trend by some, this is a way-of-life for them.  Nothing gets Parsons and Veres more upset than when a restaurant advertises that they use locally grown produce and locally raised foods in the making of their entrees, but in actuality only purchase a small amount from the local market.  Putting on a Chefs jacket, walking among the locals, and buying a few items doesnt necessarily support your claims, says Parsons.  For example, she continuesand this has happened to us [Restaurant X] buys from Grateful Growers Farm one or two times, lets say a 10 pound rack of pork and uses our name on the menu  but then never buys from us again, yet keeps our name on the menu.  Thats a false advertisement.   We dont care if you buy from us or from a larger company, such as Smithfield or Cisco, but dont say you do when you dont, says Parsons. Its a dirty little secret some of the restaurants in Charlotte keep, explains Veres.  They put our name on meat thats not from our farm promoting themselves as users of local foods, but in reality the percentage of money spent on local farms is miniscule.  It is important to us that we are not misrepresented.

Parsons has taken an oath to be the Gatekeeper, and as Chef, to have the integrity and transparency that comes with loving food.  When the consumer buys from us or eats in our restaurant, they will be provided the best quality product.  As the Gatekeeper, if I dont keep to these standards then Im not fulfilling the responsibility and Ive failed.  This is not an option for me, says Parsons.
In 2011, Parsons was named Restaurateur of the Year by Charlotte Magazine; in April 2013 she won the Sustain Charlotte award for food, and was also one of two American chefs to be named Ambassador of American food in Slovenia.  Using food as a universal language, Parsons and Lenny Russo, Chef at the restaurant Heartland in St. Paul, Minnesota traveled to Slovenia, a country the size of New Jersey with a rich heritage and a people who find joy in sharing their love of land, craftsmanship, and food.  For several weeks, Parsons and Russo traveled throughout Slovenia demonstrating how American cuisine is capable of sustaining agriculture while cooking, and learning from other Slovenian chefs.

Since having established themselves as partners, Parsons and Veres friendship has grown tenfold.  When you share the same philosophy, work together as a team, and own up to the simple truth that living in a sustainable world entails respect, kindness, and integrity–not only in your relationship with nature but to one another and the community–how can you not succeed.  Parsons admits to being even keeled while Veres can get fired up.   We make a pretty good team, says Parsons.  Were both different, but we appreciate each others differences.   Veres likes the farm and is more like the country mouse in Aesops Fables.  I enjoy the city; its vibrant and sexy, but the farm is vibrant too; its alive, beautiful, serene, and wonderfully quiet.  For the two of them, life is poetry in motion.

For more information please visit their websites online at  www.harvestmoongrillecharlotte.com and www.ggfarm.com.