The night I visited Ghostface Brewing for an interview with owners Mike and Suzy Cuddy was brisk. We sat at a table outside, bundled in our coats, and playfully argued about who would get to sit in the chair closest to the outdoor heater.

Mike and Suzy are the kind of people you feel you’ve known your whole life, even after you’ve just met them. They are warm (even when the air is not) and open, perpetually prepared to make a new friend, and uninterested in pretense. Just ask one of their many, many loyal customers, most of whom have been sipping at Ghostface since its inaugural brew in April. 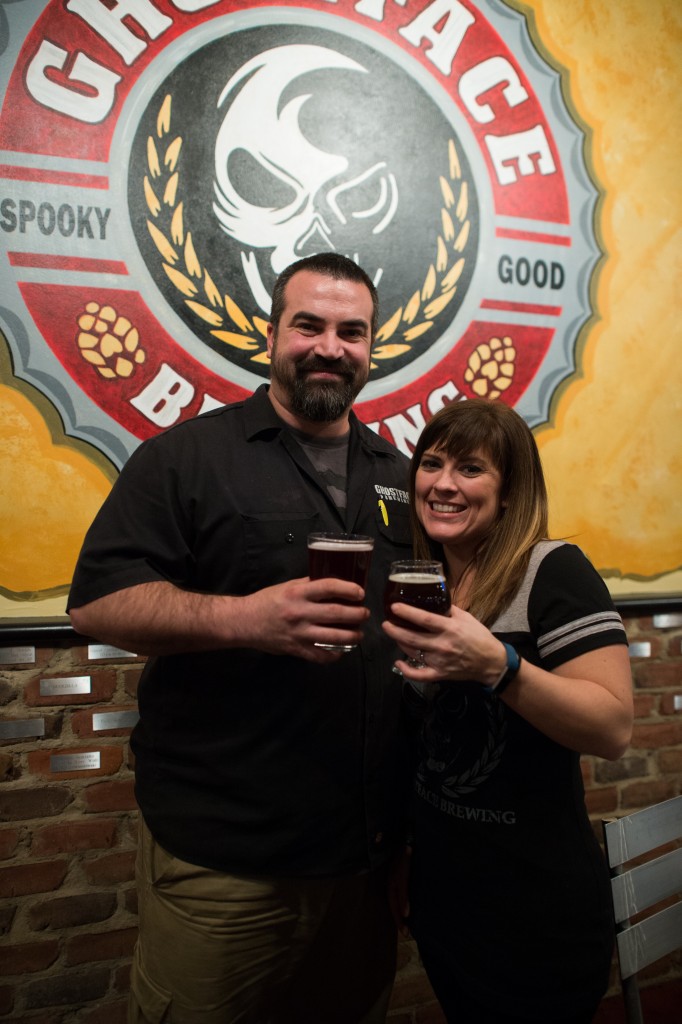 The inception of Ghostface Brewing might most accurately be dated 20 years ago, when Mike and Suzy first met. “I was in college and aimless,” explains Susan, who grew up in New York. “I didn’t know what I wanted to be, but I knew from seeing people around town that I didn’t want to be the person that stayed there forever, working the same job from high school.” Suzy’s sister had moved to Charlotte and, delighted by the city, encouraged Suzy to journey south as well. She made all of the preparations to migrate, including enrolling at UNCC, but shortly before her departure she met Mike. “‘You cannot stay for a boy,’ my friends and family insisted,” recalls Suzy. “So, I didn’t, even though I wanted to.” For one year, they powered through a long-distance relationship until, finally, Michael joined her in North Carolina, followed by both of their families.

Fifteen years later, Mike took up home-brewing and outfitted his basement with five taps, prompting neighbors to wander in and out of the house, sipping and schmoozing to their heart’s content. Buoyed by the popularity of his beverages, Mike proposed opening a brewery to Suzy, who reacted enthusiastically. “It was the first time she liked one of my ideas,” Mike jokes.

Ghostface is, in some ways, an extension of Mike’s basement. The spirit within is just as convivial, and it is impossible to enter without leaving as a permanent part of the exceedingly boisterous Ghostface family. Yet, its aesthetics, scale, and functionality are, of course, fundamentally different. Ghostface boasts a wood fired oven, which is put to excellent use each night by Davidson Pizza Company. Mike has upgraded from five basement taps to 16 bar taps, all of which are linked to Ghostface original brews and keep company with four Red Clay ciders and house-made mead.

Mike and Suzy have big plans for Ghostface, starting with bottling their core beers for local distribution. They also recently purchased another section of their building, adding 1,000 square feet and another walk-in cooler, which will enable them to double their output in the coming year. Beyond that, the Cuddys’ plans are nebulous. What’s certain is that, no matter how much Ghostface might grow in coming years, it will remain a business born from a love story, which exudes the affection one would expect from such a conception.