After three years of hard work, long hours, one hell of a build out, and lots and lots of delicious taste testing, Justin and Sarah Brigham open their doors to Southend’s newest brewery, the highly anticipated Sycamore Brewing.

Three years of hard work. That’s how long Justin and Sarah Brigham’s goal of opening a 15 barrel brew house took.  But on November 1, 2014, the doors to Sycamore Brewing officially opened. With a huge crowd in attendance, food trucks, music, and of course craft beer, Sycamore celebrated their grand opening. 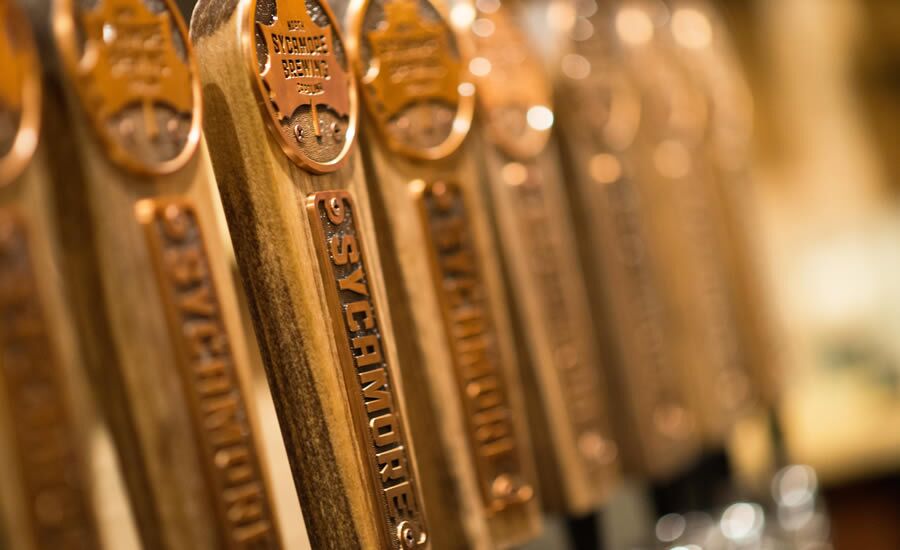 Located at 2161 Hawkins Street in Charlotte, the brewery is housed in what once was a 1950’s auto garage. Gutting the building to the bare walls, Justin and Sarah created an inviting space for the taproom, as well as a working space for brewing beer.  If you had told me 10 years ago that I’d be getting ready to open a Craft Brewery the year I turned 30, says Sarah, there’s not a chance I’d believe you.

Beer was not a favorite of Sarah’s until Justin explained the difference between industrialized fizzy, yellow beer and craft beer made with various ingredients such as Ecuadorian cocoa nibs, coffee, citrus forward hops, lemongrass, high grade barley, and organic chicory. Justin had a good knowledge of the brewing industry. While attending the University of Colorado he spent his summers working in Coors grain elevator purchasing barley from farmers. It was during this period of Justin’s life that he started home-brewing. For the last ten years, he has been working on recipes and making some amazing beer. For eight of those years, I’ve been the head taste tester. It’s a tough job, but someone has to do it. I’m also an avid cook, so I have had a hand in the recipe development of some of our funkier brews. 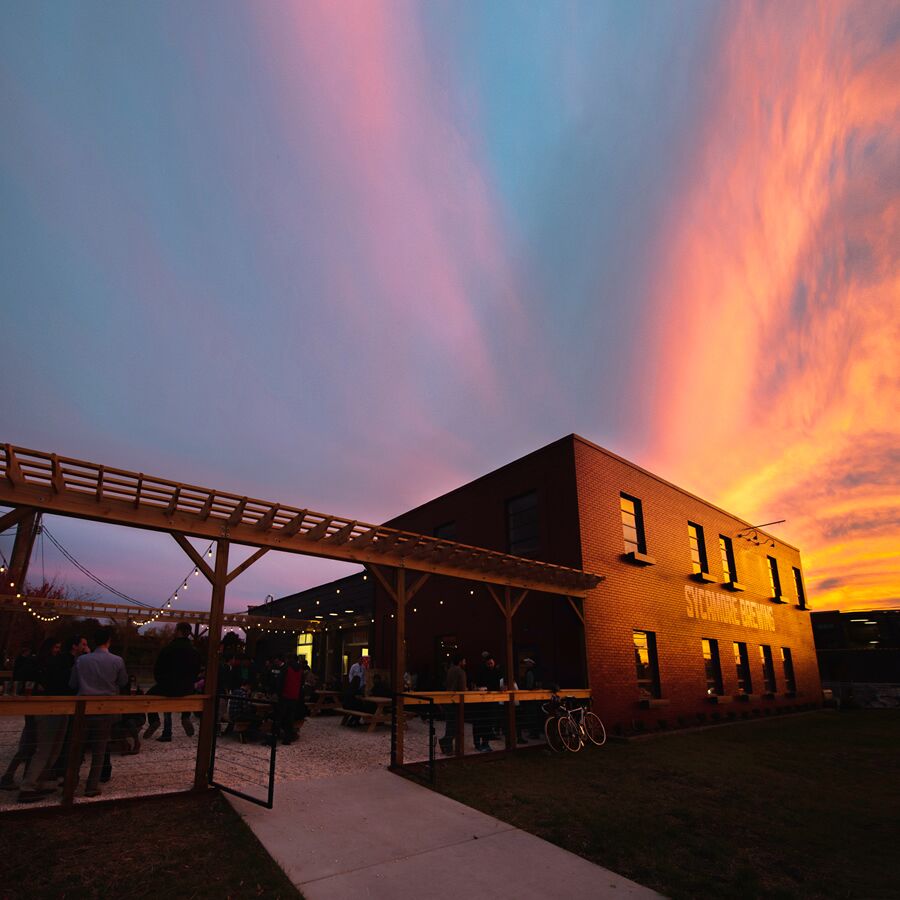 The brewing process is all about knowing where your ingredients come from and knowing the people that helped to produce them.  Using local ingredients is important.  Their aim is simple, use the freshest ingredients possible and brew all-natural, extraordinary beer.  Because the basic ingredients of beer are water, yeast, malt, and hops, Sarah and Justin’s dream beer is locally sourced.  Last summer they successfully captured [their] own wild strain of North Carolina yeast off the blueberry bushes in [their] backyard. Locally grown hops come from Piedmont Hops; the Riverbend Malt House in Asheville supplies them with locally farmed artisan malts. We have some great agricultural producers in this state, and we’re all about supporting and keeping that tradition going.

In the 1400’s the Reinheitsgebot established a German purity law for beer; however, Justin and Sarah don’t really subscribe to that law.  There is a good chance that some local fruits or spices may also go in the brew.  The sky is the limit!  Since water is crucial to brewing beer, filtration for purity is a must.  Grains affect the color, roastiness, and sweetness, of the beer, so good barley is essential.  Hops, which craft brewers use many different varieties, lend unique flavors, aromas, and the necessary bitterness to beer. The time in which they are added during the production process determines a lot.  As a brewer, it’s all about being adventurous, and how far your imagination takes you! 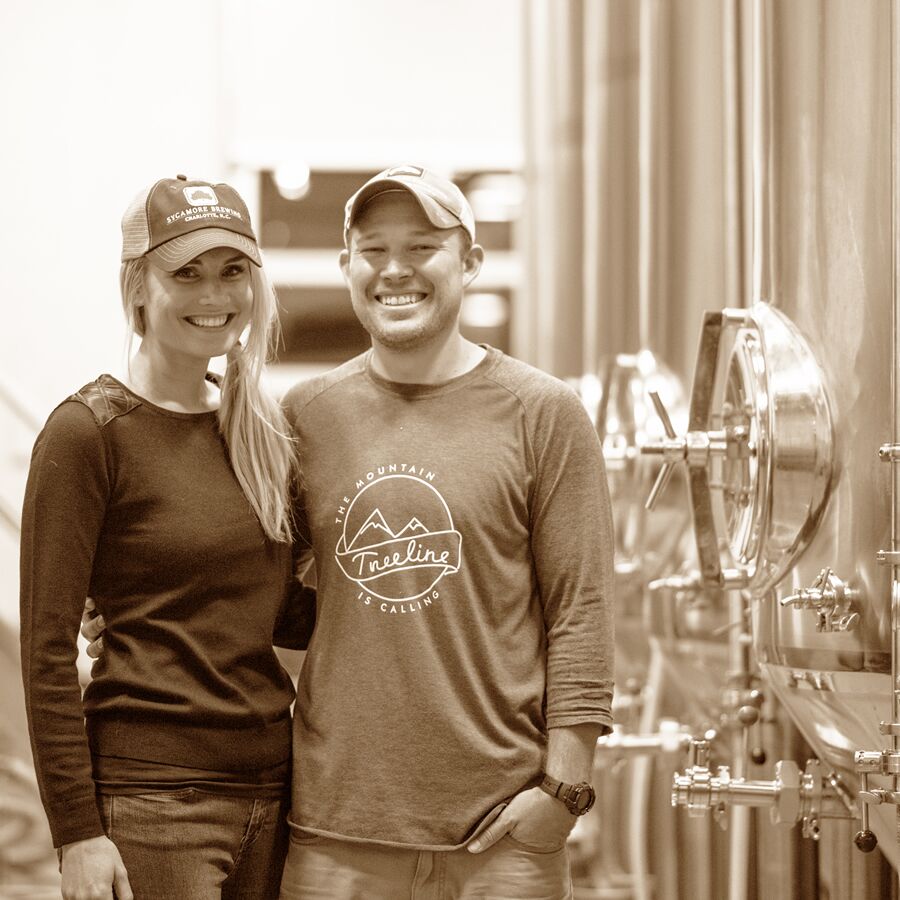 Having embraced the brewery scene, Charlotte makes for a great place to open a brew house.  There’s a tremendous craft beer evolution taking place in Charlotte.  After the first craft brewery opened–John Marrino’s Olde Mecklenburg–the city has seen a wave of craft brewery openings.  Demand for craft beer is to blame.  But this is a good thing.  As more breweries, bottle shops, and craft beer bars open and attract attention, more interest is stimulated and more mass market beer drinkers are converting to craft beer. It’s a beautiful cycle, says Sarah.

Opening a craft brewery is not without its difficulties. Time, perseverance, passion, and a belief in one another all play a role in a brewery’s success.  Having come home to Charlotte to open Sycamore Brewing was the right thing to do.  There is something to be said for opening a business in the city where you grew up, and where you have a strong network of friends and family.  We both love it here, and we’re excited for Sycamore Brewing to become part of the community. For further information visit Sycamore online at www.sycamorebrew.com.