When Beth Addison heard that renowned treehouse designer Pete Nelson, of Animal Planet’s Treehouse Masters fame, was in town, she did what any sane person who works with kids would do: She tracked him down. With her hastily sketched “owl’s nest” library idea in hand, Beth excitedly struck up conversation with the television personality. As Director of Development and Communications at Charlotte’s Omni Montessori School, Beth was the ideal person for the job. That job, of course, was recruiting Nelson Treehouse and Supply to design a treehouse on her school’s wooded campus. She had her work cut out for her, and so did Pete Nelson.

“When children come into contact with nature, they reveal their strength.”

In Beth’s barebones drawing and bright-eyed eagerness, Pete Nelson saw a little of his own childlike enthusiasm.

“She was going to make it happen,” Pete laughs. “I love when I see that kind of spirit, because I’m such a yes-man myself.”

Pete is no stranger to these kinds of appeals. The guy is on television, after all, because he knows his stuff. He’s been in the trees about as far back as he can remember.

“My dad and I built my first treehouse in an old maple,” Pete says, reflecting on the big-kid career he’s chosen for himself. “It was tiny, but it was my first real place of my own and that made a huge impression. That was the beginning.”

From then on, Pete began nurturing a deep-seated love for the woods and, well, wood itself. From crafting models in his grandfather’s woodshop to constructing formidable fortresses with his childhood friends, he found he had a knack for anything remotely tangential to carpentry work.

“Back then, I didn’t have Nintendo, so if I had a sharp stick,” Pete laughs, “it was going to be a good day.”

His every free moment was spent “nailing things to trees and knocking two-by-fours together”—a trial-and-error method of childhood that eventually revealed to him what he loved doing.

“What we need is a world full of miracles.”

Naturally, the treehouse builder loved Beth Addison’s idea, but years in the business have taught him a couple vital lessons. Beth’s initial meeting ended with Pete’s ever-so friendly reminder that treehouses—even something much more child-sized than his usual lofty builds—aren’t cheap. For Beth, who has enrolled three children in the Omni Montessori program and who is thus thoroughly invested in the school’s welfare, the reality check was harsh. But good ideas rarely go to waste.

“When you’ve a good cause,” Pete muses, “it doesn’t take long for someone to step up and say, ‘Sure, I’ll write a check for that.’”

Word had gotten around, and “the most exciting phone call of [Beth’s] life” brought with it one of the school’s largest ever parent donations: The entire expense of her treehouse library dream. A couple months and loads of paperwork later, Pete’s team, an Animal Planet film crew, and Pete Nelson himself were on Charlotte’s Omni Montessori campus hammering out plans for a newly-designed treehouse library.

If we can get kids in the trees and in a library at the same time, I think we’re succeeding on all fronts.

They were also, for a time, hard at work hammering out kinks. Pete is accustomed to building private homes for adults, and his tree-bound designs are, in truth, sturdier than many cement foundations are today. A commercial structure, on the other hand, meant safety permitting hurdles that Nelson Treehouse and Supply hadn’t encountered before—extra supports were necessary, the structure couldn’t be suspended too high off the ground, the path of entry had to be a particular incline—but these challenges were met with grins, not grimaces, because Pete and his crew believed in the project and all of the good it represented. 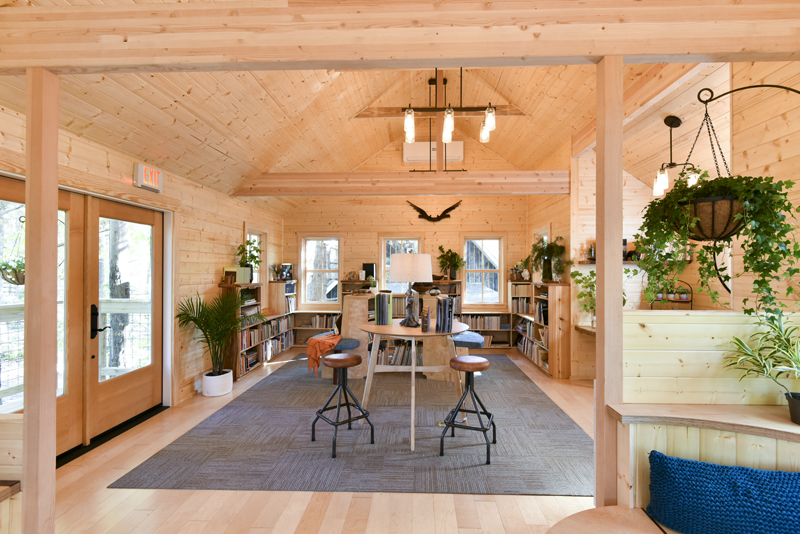 “What the hand does, the mind remembers.”

This treehouse library really was meant to happen, and it couldn’t have happened anywhere other than at a Montessori school. Pete admits to having felt a connection with the school and the project from the beginning. All of his children were educated in Montessori programs—a fact he doesn’t take lightly. Pete’s own excellent education and upbringing made him a Montessori student in spirit if not in practice, his inclination toward hands-on learning and respect for nature’s teaching ability aligning almost too perfectly with Maria Montessori’s philosophy. In a sense, he built this one for himself.

Pete and Beth believed so deeply in this endeavor because the end result is more than just a fun addition to the grounds. Beth Addison says this little wooden owl is representative of everything the Montessori method cherishes in a child’s education.

“Maria Montessori believed very strongly that it’s important for children to be connected to nature,” Beth explains. “Especially nowadays, when we’re hooked up electronically all over the place. We should seize any opportunity for kids to reconnect with the outdoors, and we try to do that on this campus. If you show up here on a regular day, there are children outside doing all sorts of things, but it’s very purposeful work.”

Picking up rocks, studying trees, touching the campus (which in itself is so full of history)—learning while out-of-doors is a major part of the lesson plan here. The newest addition to the campus practically had to be in the trees. Of course, it’s not just any old house suspended above the ground. It functions primarily as a library, a place for an altogether different kind of touchable learning.

“Books are still so important,” Beth insists, “and we wanted to create a space that was comfortable and fun, but was also a quiet place where kids could go for research, a reading retreat, or just some time away from the classroom.”

Maria Montessori believed very strongly that it’s important for children to be connected to nature—especially nowadays, when we’re hooked up electronically all over the place.

As with any true library, the hope here is that the sounds of turning pages and the hallmarks of tactile, technology-free learning will dominate the space. The library is as a library should be—when a child requires information, they’re able to look for it in a tangible way. But Pete Nelson’s library may be just a little more enticing to the inquisitive child, for obvious reasons. And that was the whole idea.

“If we can get kids in the trees and in a library at the same time,” Pete laughs, “I think we’re succeeding on all fronts.” 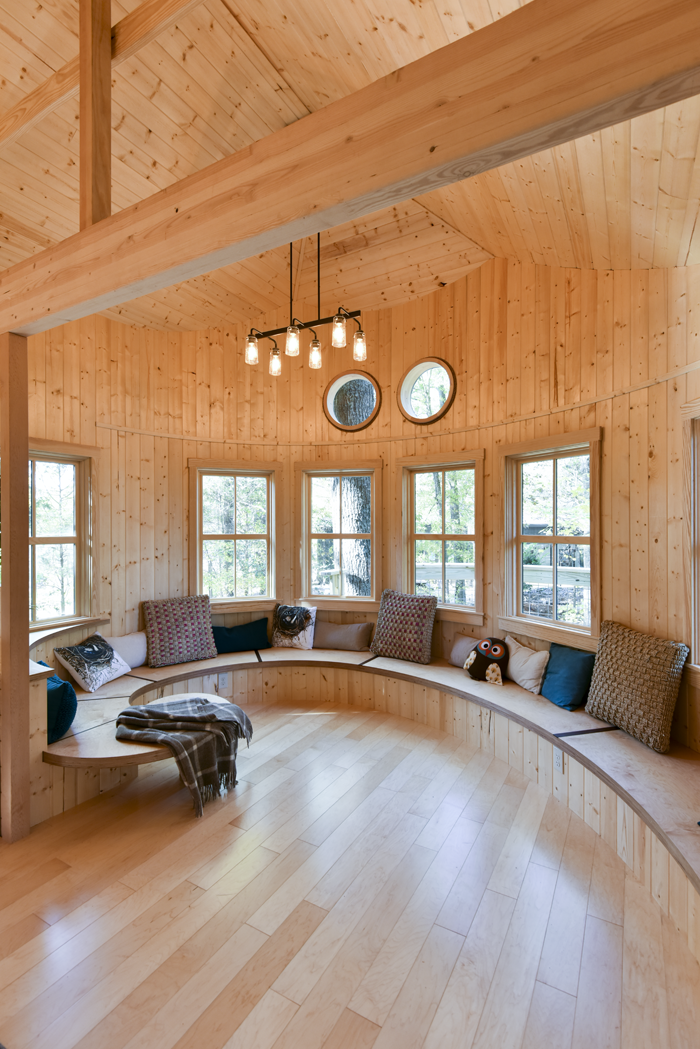 “We must provide the child with an environment which will enable him to develop freely.”

It’s not hard to keep the kids aloft and reading when the trees are this welcoming. Despite Pete Nelson’s assertion that he was meant to build, he’s an incredible designer because he has to be. His tree refuges wouldn’t be the luxe spaces they are if he didn’t understand form, and they probably wouldn’t be spaces at all if he didn’t understand function: One does not simply put a 250-square-foot structure up in a tree without a firm handle on basic architectural engineering. Fortunately, being in the business of building in trees has made Pete some arborist friends. And they’ve taught him a ton.

In the case of Omni Montessori’s treehouse, Pete retained as much of Beth’s original Owl’s Nest concept as he could. But the building site, as Pete says it’s wont to do, dictated much of the structure.

“Trees inform the design,” Pete says. “If I try to begin with a preconceived notion of the design, I’m going to literally be fighting nature the whole way. It’s best to wait until the trees present themselves—and they always do.”

In this case, the selfless volunteers for the cause consisted of a beautiful grove of oaks, sweetgums, and a lone cedar. Due to the positioning of these primary supports, Pete’s first elevation drawing steered away Beth’s “nest” idea in favor of an elongated structure with two large, round eyes. The owl’s nest became an owl, channeling the form of the Omni Montessori mascot, complete with a hand-carved beak of Western red cedar.

Of course, the owl wouldn’t be a proper addition to a Montessori campus if it didn’t have anything to teach. Alongside all of the obvious instruments of learning on the shelves are some characteristically clever Pete Nelson design touches which in themselves have the ability to educate. The most obvious of these may also be the most physically attractive feature in the owl: The curling bench along the library’s rounded wall. It’s a Fibonacci Spiral, a reference to the efficient growth structure of many plants.

“At the time we were building,” Pete recalls, “I was interested in this perfect recurring design in nature, so I saw no reason not to include it in a treehouse, which is by its nature connected to these living things.”

It’s no accident that so much of the design emulates nature. The outdoors have plenty to teach, and so does a knowledgeable guy who spends all his time outside. In a Pete Nelson design, even the seating has something to share.

“Play is the work of the child.”

Sharing has always been an integral part of Pete Nelson’s career. It’s what got him the Animal Planet show in the first place, even if he didn’t realize it at first.

“In the early days,” Pete reminisces, “I used to wonder how a television show about a construction job could be interesting. The truth is, Animal Planet manages to make a story out of these things because it’s way more than just a treehouse. It’s about the people involved, realizing their dreams. Building these treehouses—this one, especially—keeps giving and giving. It gives to me, it gives to Beth and the school, and above all it gives to these kids.”

Beth Addison just wanted a treehouse for the Omni Montessori kids. She never expected Animal Planet to step in and film her school’s story for television; they did, though, because it’s a story worth sharing. And that story is not so much the tale of Beth Addison or Pete Nelson as it is the story of a bunch of children and their treehouse.

The Omni Montessori students, ranging from three to twelve-year-olds, were present for the whole of the construction and filming process. They were able to remain involved, befriending all of the cameramen from Animal Planet and the Nelson Treehouse crew along the way. It was a learning experience unlike any other: For nearly two months, the kids watched this wondrous, handmade thing spring up before their eyes..

So when the children were finally allowed inside, there was a little of what Pete calls—“at the risk of sounding corny”—real magic.

“They were truly in awe of what they were seeing,” Beth smiles. “There was such pure, raw emotion in there. The joy of those children…It was one of the happiest moments of my life.”

The kids weren’t the only emotional parties, though.

“Their reactions triggered my reaction,” Beth laughs, “which, of course, was ugly crying face.”

With a response like the kids’, it’s really no surprise Pete Nelson is one of the happiest men on television. He does every day precisely the thing he wants to do, because he was able to explore his options when he was a child. Together with the school’s guides and the tried-and-true Montessori method, his Owl’s Nest Treehouse Library gives these Charlotte kids what years in the woods gave him: a place integral to childhood, a place where they can develop freely—a place of their own.

As long as there are people like Pete Nelson and Beth Addison around, children will find what they love. If that happens to be building houses in trees, well, Pete’s niche market could use the healthy competition. 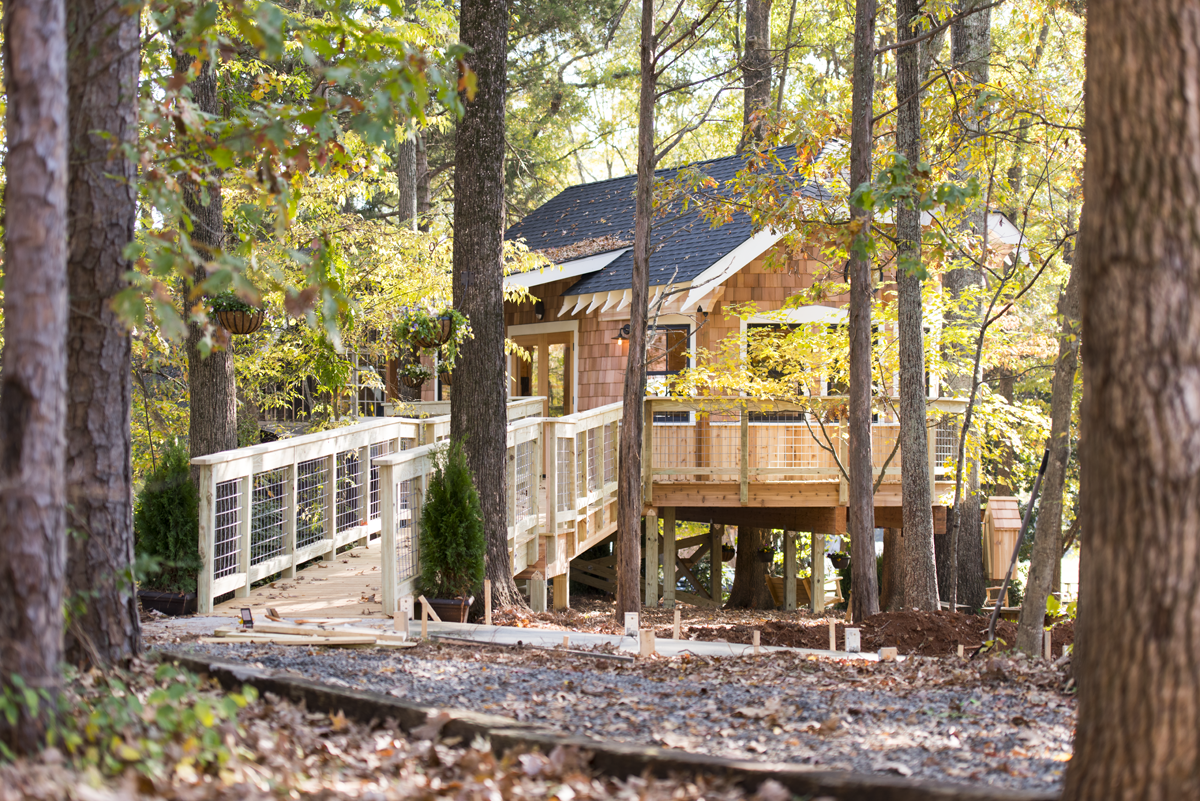