When Jennifer Pharr Davis first hiked the Appalachian Trail, she did it to find herself.

A recent graduate with an uncertain future, Davis took to the 2185-mile trail to find her bearings, to gain a sense of direction by following the footsteps of the hundreds of hikers that came before her. When she hiked it a third time, she did it to prove herself, to test the limits of her own endurance and prove she could push beyond them.

As Davis’s life began to change and she welcomed the beginnings of a beautiful family, her reasons for hiking changed along with it. Her journey is remarkable in itself, but perhaps more so is the ability for hiking as an entity to embody the challenges she needed to face, the beauty she needed to see, and the pain she needed to feel. With a deep-seated understanding of hiking’s powerful versatility, Davis has made a career out of both bringing people to the trails and, through her personal stories and memories, bringing the trails to people. 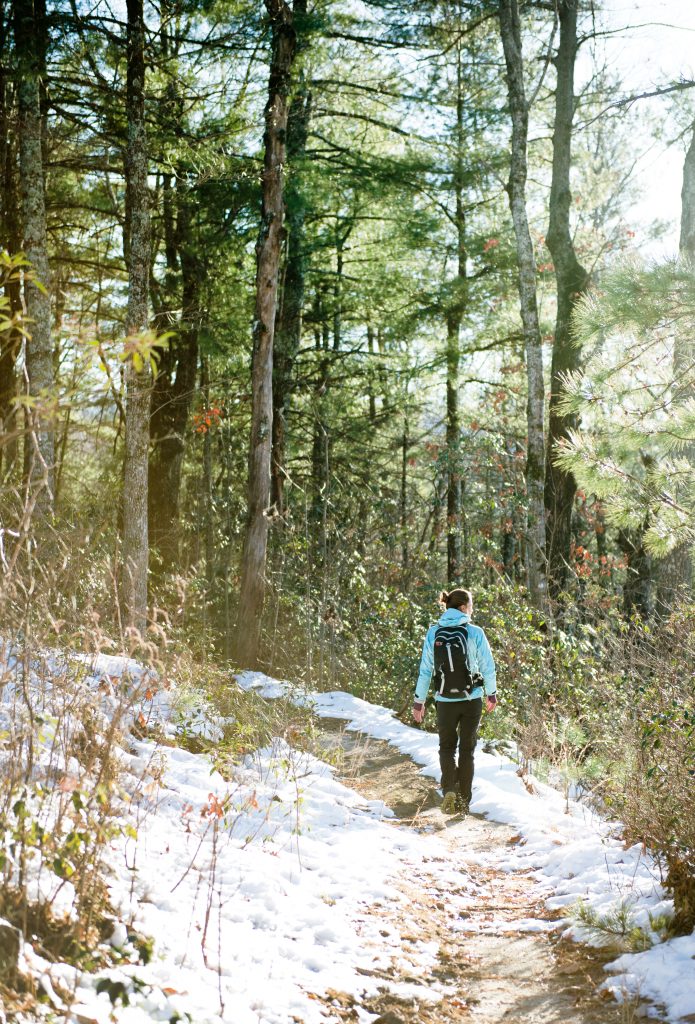 “It was right out of college that I decided to do the Appalachian Trail,” says Davis of that life-changing hike. “I think I had only spent two nights in the woods my entire life, and I just felt like something was missing, and it was that connection with the outdoors.”

That connection would ultimately lead Davis to complete the trail in its entirety two more times, with her final run shattering the previously-held record for fastest thru-hike. At an average of a stunning forty-seven miles per day, she finished the trail in forty-six days, eleven hours, and twenty minutes. Davis was used to the aches of long distance hiking, but none of those compared to the prolonged pain of that speed run.

“I was trying to work through shin splints, and at one point I had hypothermia,” Davis recalls. “Another time I had a horrific stomach bug that had me running off the trail every few minutes. To deal with that type of discomfort and know you still have to go a minimum of thirty or forty miles, it’s just…grueling.”

The trail was merciless, but Davis did not set her heart on breaking the thru-hike record to be met with mercy.

I had a lot of emotional barriers I had to work through because no woman had ever set the overall mark, says Davis.

“There were a lot of times of self-doubt where I thought, am I really able to do this? Does my gender, does my demographic, does my strategy discount me from competing for the record?”

Those questions echoed off the Appalachian slopes as she walked, mingling with the sounds of her splashing through streams and crunching over rocks. And no one but she could answer them.

The bittersweet ending to her Appalachian Trail hike left her with a cloud of emotions to sift through, but also brought her the things she’d been yearning for—accomplishment, confidence, clarity. 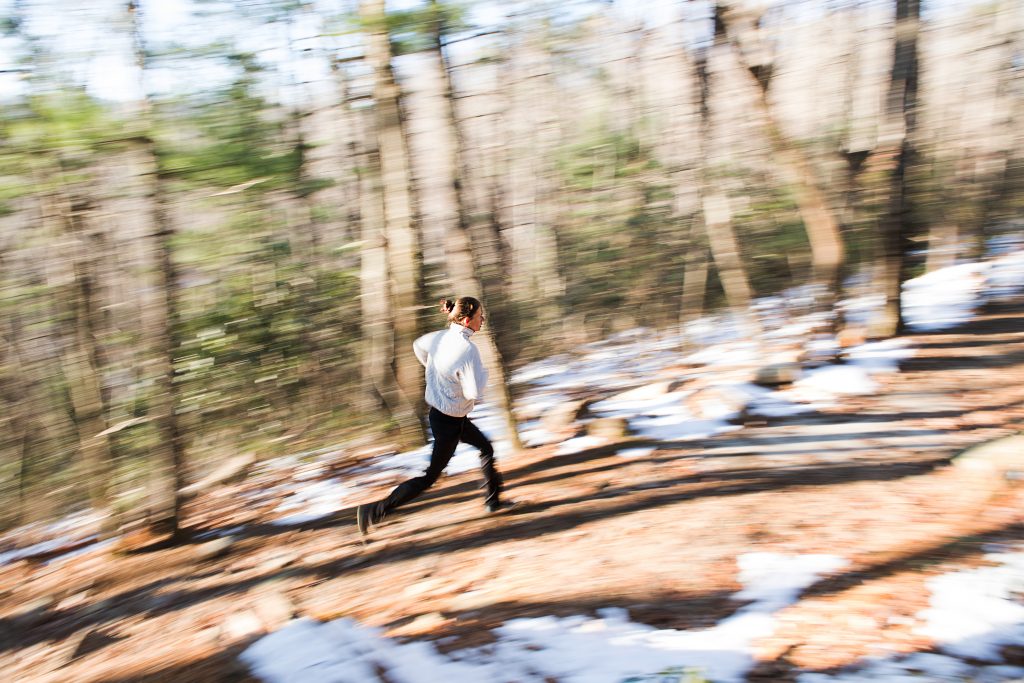 Davis started Blue Ridge Hiking Company just a few years later. Now, with two young children, a successful writing career, and a thriving hiking business, Davis had closed that chapter of her life, committing herself to smaller hikes instead.

“Setting that record,” Davis recalls, “going so fast… I think it’s allowed me to go slow for the last 5 years. The kids have decreased my mileage, but they’ve helped my career.”

But when the Friends of the Mountains to Sea Trail, an organization dedicated to the maintenance of the 1175-mile trail, approached Davis about promoting them, Davis knew she’d have to help. In 2017, she reopened that chapter and began hiking. As luck would have it, the new trail’s starting point, Clingmans Dome, also doubles as a major marker for the Appalachian Trail, giving Davis a chance to return to her roots before setting off on another adventure. 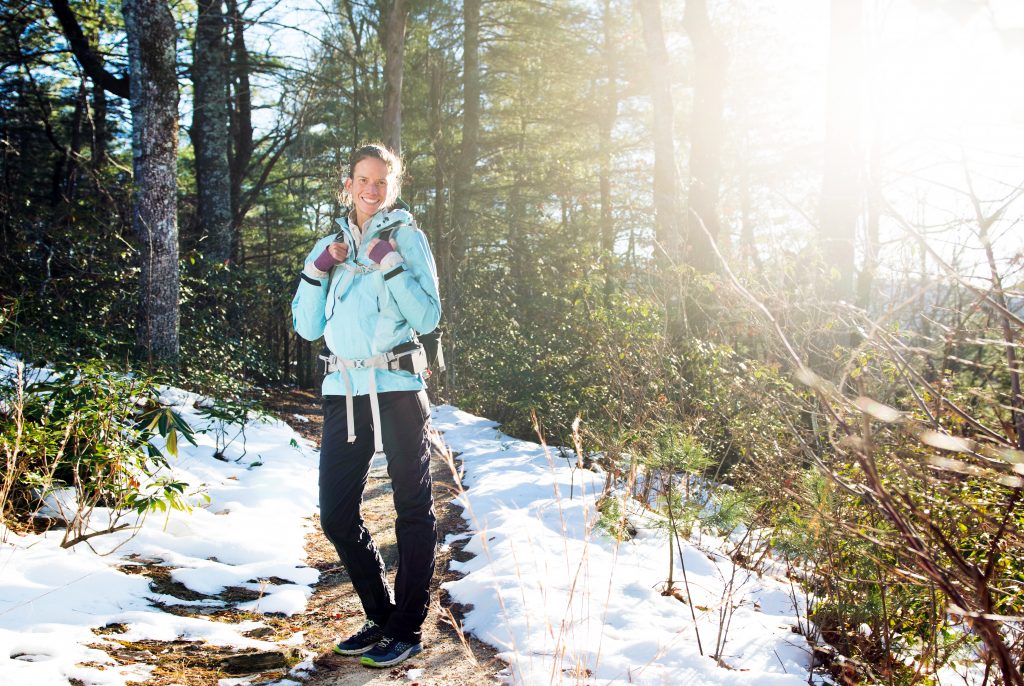 This time was different, though. Instead of crossing the state alone, she’d have her husband and her two kids—ten-month-old Gus and four-year-old Charley—along for the ride. After leaving Clingmans Dome, Davis quickly realized that this hike would provide its own unique set of problems.

The challenges of raising a one year old were amplified by the constant travel and hiking, but with them came a newfound appreciation for the closeness and quality family time that the trail seemed to give both her and Brew. While she hiked the most difficult areas of the trail alone, Brew took the children to museums, nature reserves, and other attractions along the way—something that was hard on Davis, who knew that Brew, like any single parent handling two young children, could use the extra help. Still, their children thrived along the trail, and Davis rediscovered all of the little wonders of hiking—the sunsets, the critters, the new knowledge—through their eyes. 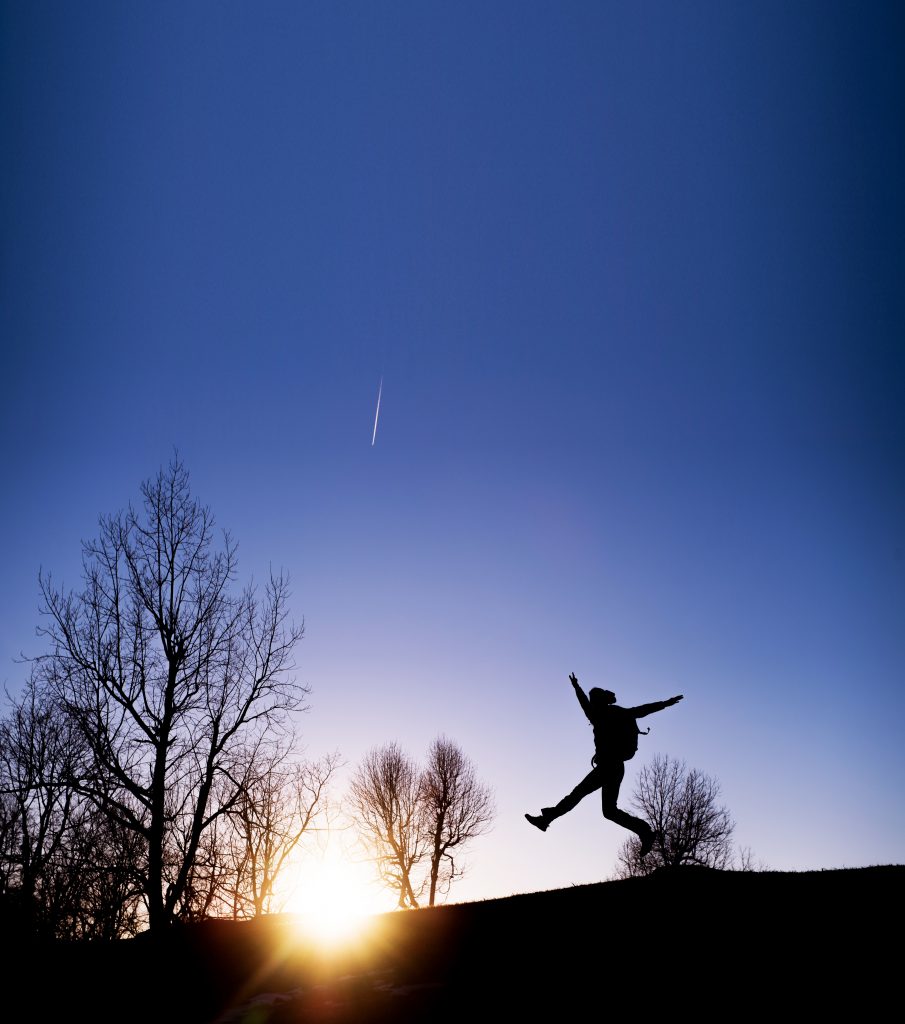 If the Appalachian Trail served to push Davis beyond her mental and physical limits, then the Mountains to Sea Trail served to intensify both the struggles and beauties of early parenthood. Her newest project, a book called The Pursuit of Endurance, speaks to that idea of the link between hiking and life, and features the stories of record-breakers and their inspiring lives, including their time off the trail. Davis writes to share a little bit of nature with others—the primary goal of her career—but she’s convinced hikers have some useful things to say:

“The trail is this really incredible metaphor for life. We have these amazing mountaintop moments, and then there are times when we deal with loss of a loved one or divorce or money issues, times where we just don’t feel like we can take another step. Hiking is this very hopeful symbol. You can do so much more than you think you can if you’re just willing to put one foot in front of the other and just keep at it. Just keep at it, one more step, one more mile… I think the lessons of persistence and resilience are extremely universal.”

It wasn’t just the long trek that Davis fell in love with all those years ago, but what stayed with her once the hike ended. Through the Mountain to Sea Trail, she found a renewed appreciation for the latest season of her life, for everything awaiting her off the trail—her career, her husband, her kids.

Jennifer Pharr Davis says that’s just one of the things that’s stayed with her–one of the many lessons, emotions, and once-in-a-lifetime moments that nothing but hiking could possibly give her. And the best part is, they can be given to just about anyone.