Establishing and operating a restaurant is rarely a walk in the park…unless you’re Chef and Minister Jim Noble, in which case those walks can help lend a hand to those who need it most. Since opening its doors in 2010, The King’s Kitchen & Bakery has been staffed with a handful of the physically and spiritually needy, the homeless and impoverished of Charlotte. A revitalizing program for up to six people at a time, this is only one of Jim Noble’s many and varied efforts to employ Charlotteans oft considered unemployable. By providing the have-nots with a field for their efforts, an outlet through which to discover new skills or hone old ones, the kitchen trains them to earn new livelihood and a chance at new life.

This kind of ethical business model necessitates an ethical businessman. It’s tough enough to start a restaurant, but heading a restaurant and a ministry, as Jim Noble’s story proves, is life-altering. The King’s Kitchen wouldn’t be the remarkable establishment it is without that ministerial function. “If not for the ministry side,” Jim says, “I wouldn’t have started this downtown.” It wouldn’t have been downtown, and it may have never been. When, in the late 90s, Jim and his wife Karen started Restoration Word Ministries and their radio broadcast “The Voice of Healing Faith,” Jim’s signature local southern cuisine was already gracing tables in High Point and Charlotte. It wasn’t until 12 years later that Jim was able to build an environment that blended his two life spheres, a place where Chef Jim and Minister Jim coexist. In The King’s Kitchen, Jim’s dual passions, “serving food and serving God,” are united in one enterprise.

“It would’ve been easier to do it in SouthPark, Jim says. “It would’ve been more profitable too, but there we wouldn’t have the people we’re reaching out to.” Many of these people, along with their professional coworkers, make up the soul of the restaurant. Jim’s recruits for The King’s Kitchen program are, put simply, unlike any other restaurant staff. From extreme life-challenges like poverty, homelessness, and the slow recovery from incarceration or substance abuse, their backgrounds are a smorgasbord of misfortune. In partnership with The Charlotte-Mecklenburg Dream Center and other local ministries and nonprofits, The Kitchen churns out more than just good food; job and life-skills training, finance management and social etiquette workshops, and even internship opportunities are all served up regularly to Charlotteans hoping to start anew. And of course, every penny of profit made goes to The Dream Center and other charities. Spiritual rehabilitation, it turns out, is Chef Jim’s favorite ingredient, and his kitchen’s every dish tells a story. Take the excellent Aunt Beaut’s Pan Fried Chicken, paired with a crumbly golden square, that most regal of cornbreads. Not only does this plate’s cost help feed the neighborhood, but — chances are — it was also cooked, prepped, and delivered to the table by hands which, without that plate, might be without anything in the world.

As with Noble’s flagship, Rooster’s, and his other restaurants, the cuisine at King’s Kitchen is southern-inspired. Executive Chef Cody Duddreth’s menu merges the simple with the refined. Hearty antebellum staples like their Gumbo and Hoppin’ John, made with heirloom Carolina Gold rice from Anson Mills, pay homage to century-old flavors. Pan seared scallops, Stone Fisheries’ crab cakes, and elegant charcuterie pair excellently with world-class wines and local craft beers to round out the Kitchen’s culinary dynamicism.

The King’s Kitchen Bakery, a recent advent to the restaurant, adds a pinch of European flavor. Mike Pappas, executive chef of the bakery, and Paul Walls, lead baker, arrive each day before dawn to scale, mix, rest and monitor the entire process. Armed with keen eyes for the texture of the dough and a lifetime of knowledge of aromas, both chefs have a gift for being able to — at just the right moments — transition the dough into its next stage. A conversion not dissimilar to the transformation some of the King’s Kitchen’s workers make throughout their time in the program. Through communion and camaraderie, bread baked leads to breaking bread. 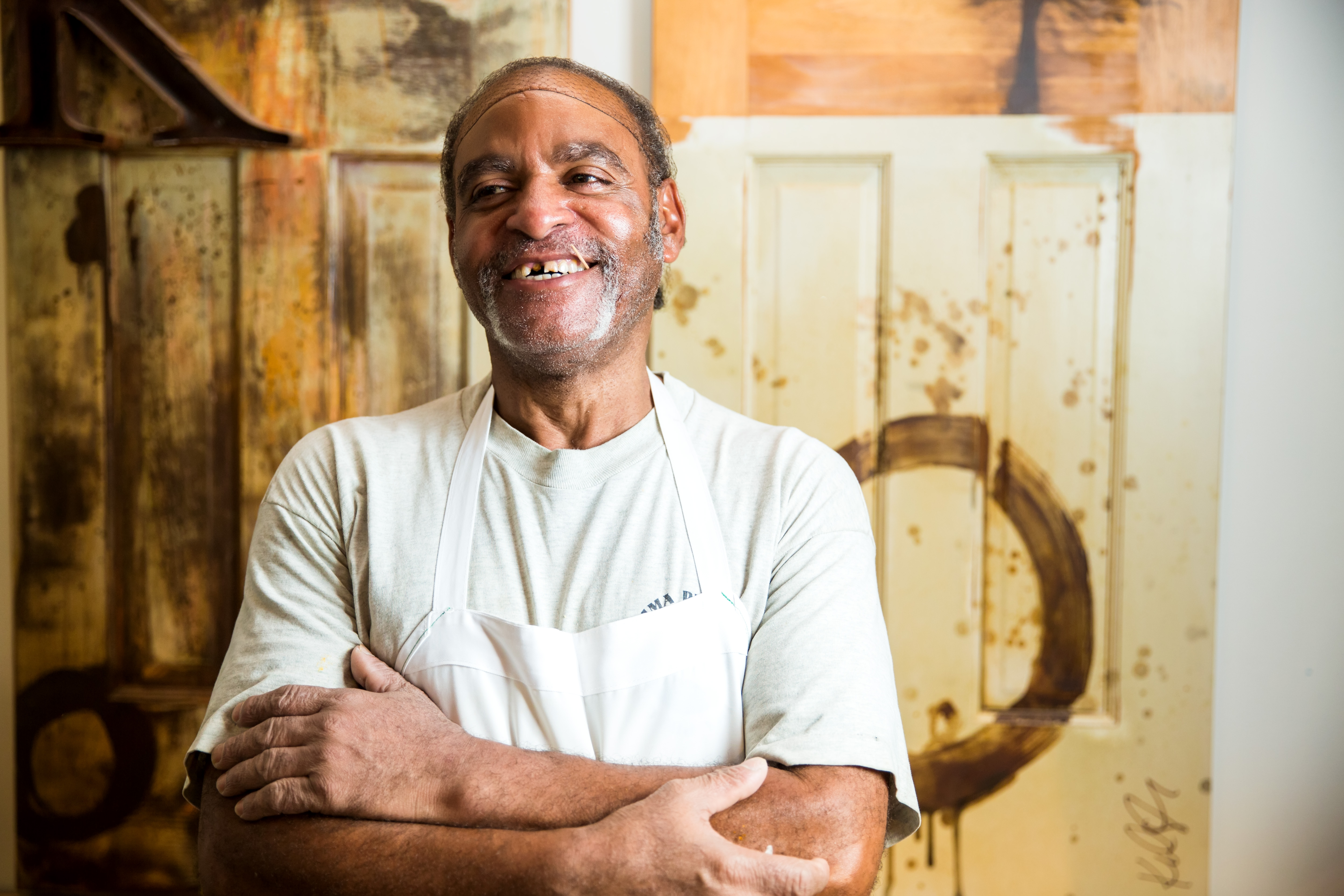 No one in this city is without hope, but a lot of the time, they think they are. I was there once too, and I didn’t find out on my own. Someone had to help me.

Ethical business begets ethical patronage, and that, in turn builds a more hopeful city. King’s Kitchen changes lives, sure, but it’s also life-fulfilling for everyone involved. Since 2014, The King’s Kitchen & Bakery has been working closely with The Charlotte-Mecklenburg Dream Center to share this brand of fulfillment with the whole of the greater Charlotte area. The Dream Center’s slogan, “Giving Hope to the Hopeless,” also encapsulates Jim Noble’s pursuits. Of course, even the most unfortunate Charlotteans aren’t without hope, “but a lot of the time,” says Jim, “they think they are.” Hope, for home, for livelihood, for communion, it seems, isn’t given — it can only be realized by those who’ve always had it. So what is Jim Noble’s goal, then? “I didn’t find out on my own,” Jim explains. “Someone had to help me.” You can’t give someone a thing they don’t know they already have, so Jim doesn’t bother to try. One man, exceptionally generous though he may be, doesn’t have provisions for everyone – that’s another, busier guy’s prerogative. “I’m just a messenger,” says Chef Noble, and he excels — and revels — in spreading the good word, plate by plate.