As central North Carolinians, it can be disarmingly easy to forget how close we are to the Atlantic. Some of the East Coast’s best beaches are mere hours from the Queen City. That’s why we’re highlighting these coastal Carolina gems: Secluded beaches, legendary sunsets, outstanding fishing, surfing, and more beckon from the east. Grab your beach bag and go to one of these top ten beach destinations of the Carolinas now.

Bulls Island
Bulls Island, a 6.5 mile uninhabited island accessible only by boat, is your destination for seclusion and unspoiled nature. The largest of four barrier islands in the Cape Romain National Wildlife Refuge, Bulls features a 5,000 acre maritime forest, plus miles and miles of sandy beach, strewn with sand dollars, whelks, and other ocean treasures. Keep an eye trained on the sky to catch a glimpse of one of the 293 species of birds that inhabit Bulls. Trek to the northern tip of the island to explore Boneyard Beach, named for fallen trees bleached white by the summer sun that give the appearance of skeletons. 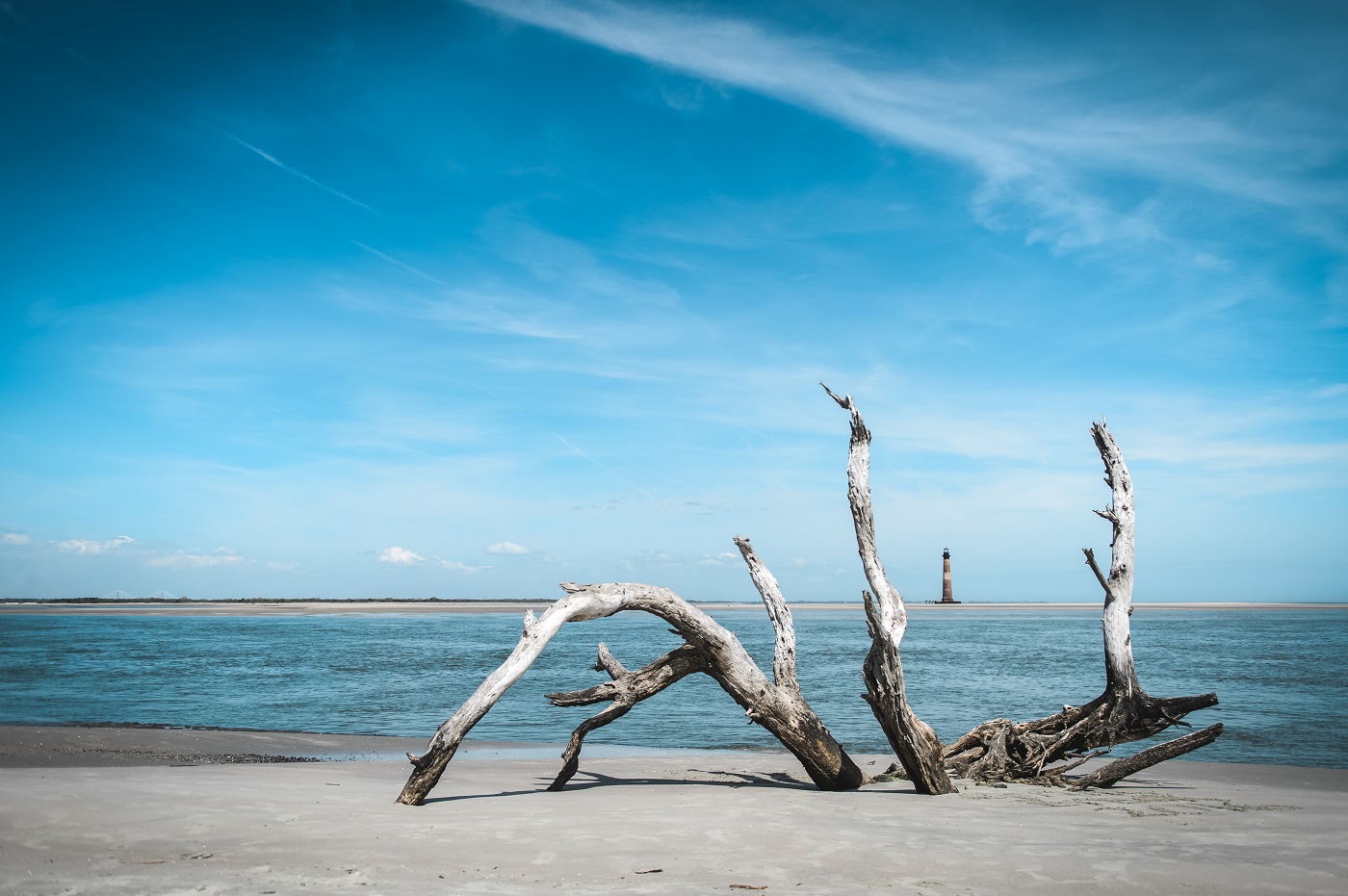 Folly Beach
It’s hard to say what Folly is better known for: its legendary sunsets or its killer surfing spots. In fact, it seems Folly Beach has a little something for everyone. Home to several endangered species, including loggerhead sea turtles and Wilson’s Plover, naturalists will find something to delight in, while the more urban-oriented will appreciate the beach’s close proximity to downtown Charleston. Drop a fishing line off the Folly Beach pier or take in the sights from a beachside bar.

Cape Hatteras
Twenty miles from Cape Hatteras, the water churns. As the Gulf Stream crashes down the coast on its southward journey, it converges with the Virginia Drift. Beneath the swirling blue, the two forces of water have constructed a twelve mile long sandbar, which the currents swiftly usher unsuspecting vessels toward, resulting in the destruction of hundreds to thousands of vessels and the area’s moniker Graveyard of the Atlantic. Thus arose the need for the Cape Hatteras Lighthouse, the tallest brick lighthouse in North America. This iconic structure perches amidst 70 miles of shoreline, watching over an island free from development, where the scenic drives are rivaled only by some of the best surf fishing in the world.

Corolla Beach
On the sandy shores of Corolla, wild descendants of colonial Spanish mustangs roam freely, grazing in the saltwater cordgrass and galloping along the sloping shores. Visitors flock to Corolla to witness these majestic creatures in a natural habitat. This, in essence, is the magic of Corolla, where visitors come for the wild horses, but stay for the upscale and recently developed amenities.

Nags Head and Jockey’s Ridge
Nags Head is one of the Outer Banks’ most established tourist destinations; since the 1960s, this gorgeous destination has catered to guests with a wide selection of restaurants and conveniences. As comfortable as Nags Head proper is, you’d be remiss not to wander further afield to Jockey’s Ridge, the tallest living sand dune on the Atlantic Coast. There, in the center of towering dunes and sprawling sand, you’ll find spectacular views of both the ocean and the sound. Enter through the visitor’s center to meander toward the heart of the dune along a boardwalk studded with exhibits that explain the dune’s ecology. Or, enter from the south side for more recreational opportunities like swimming, paddling, and a stroll along a one-mile nature walk. Perch atop hills of sand and feel like you’ve landed on a distant planet. 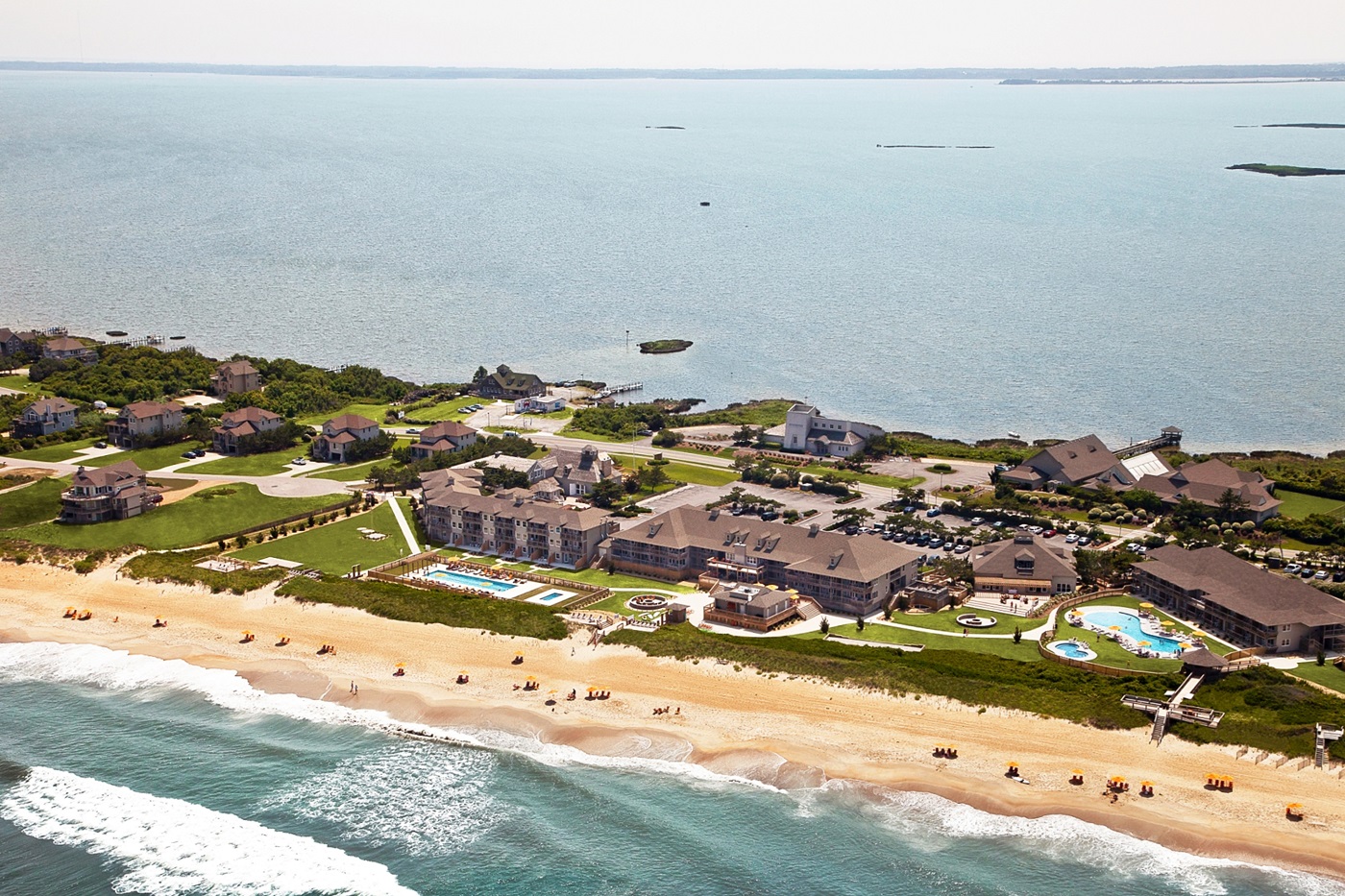 Bald Head Island
Bald Head is for the traveler seeking a serene retreat. Accessible only by a private water vessel or a 20-minute ferry ride across the Cape Fear River, Bald Head Island feels miles from its nearby neighbor of Wilmington, both in terms of geography and tempo. This remote getaway elevates beach life, boasting intimate vacation rental neighborhoods, beach, maritime forest, and marshland, and, remarkably, very few hotels or commercial developments looming over beachgoers.

Capers Island
Like Bulls Island, Capers Island attracts visitors with a penchant for natural settings and seclusion. Accessible only by boat, Capers is an uninhabited, state-owned barrier island. In fact, visitors would never guess it was mere miles from Charleston, given the density of wildlife, such as alligators, white tailed deer, snakes, bottlenose dolphins, and many species of birds (including ospreys and bald eagles) that call this tiny island home. As on Bulls Island, boneyard beaches dot the shores of Capers, gleaming white in the bright sun. Spot them on one of the many eco tours that guide visitors through this gorgeous patch of land. 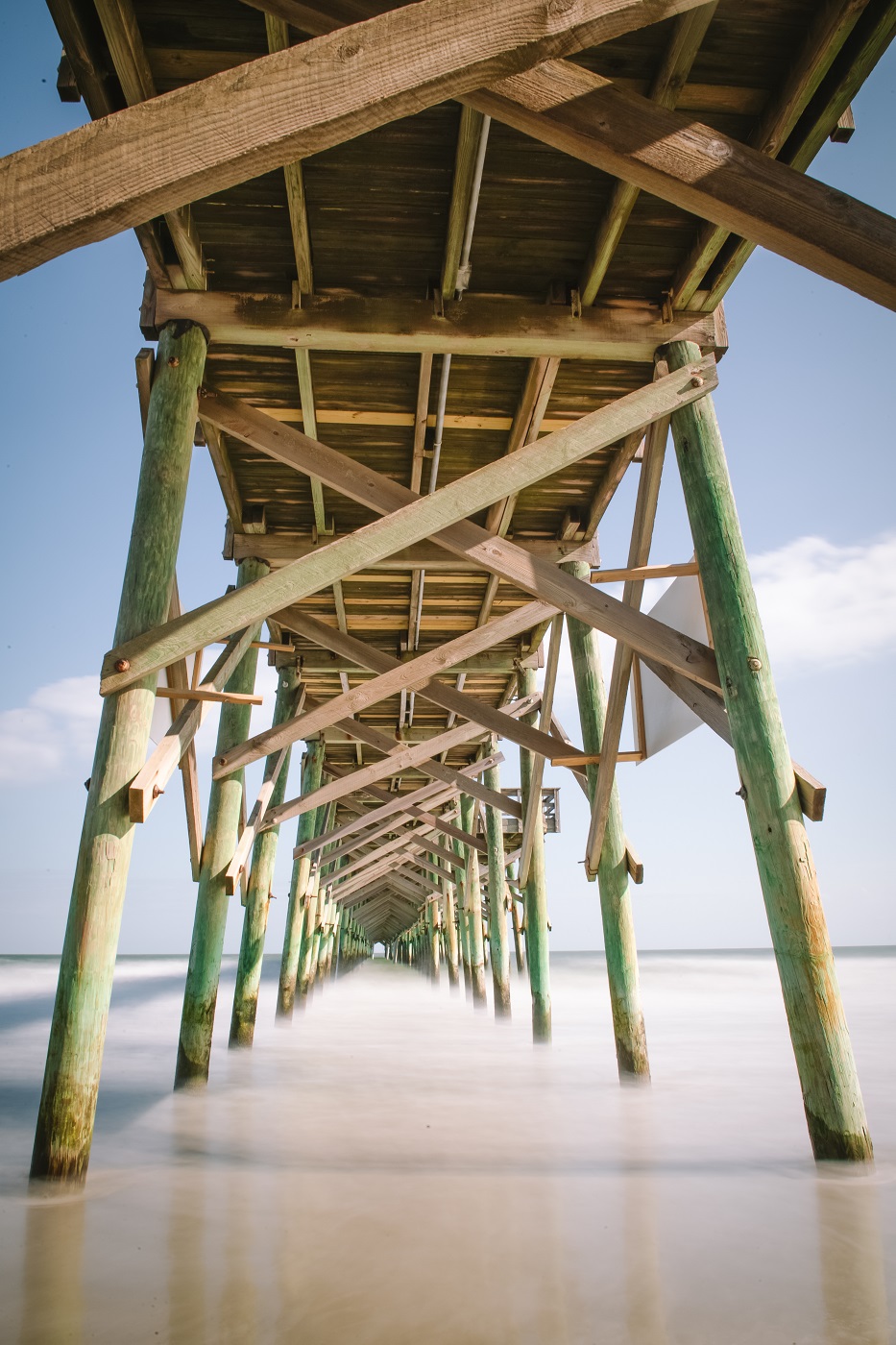 Sullivan’s Island
There are a myriad of reasons to put Sullivan’s Island at the top of your Carolina destination list this summer. First discovered by English explorers in the 17th century, Sullivan’s Island was well established as a busy shipping port by the 18th century, when American troops fended off the British during an early battle in the Revolutionary War. The setting of this now famous battle, celebrated regionally on ‘Carolina Day,’ was Fort Moutrie. This structure, which would later house Edgar Allen Poe in the 19th century, has been carefully preserved and is a popular landmark for visitors and residents alike. Visitors who aren’t compelled by Sullivan’s Island’s rich and extensive history can instead spend their time in the handful of galleries and restaurants or on the shores, enjoying breathtaking views of Charleston Harbor and quiet beaches.

Kiawah Island Beachwalker Park
Kiawah Island is one of the Carolinas’ most exclusive beachfront destinations. Although known for its top notch golf courses—Kiawah Island Golf Resort hosted the 2012 PGA Championship and is scheduled to host again in 2021—Kiawah is also a place of tranquility. Daytrippers to the island, after securing a car pass, should head straight to Kiawah Island Beachwalker Park. Ten miles of public coastline tempt park goers from within Beachwalker Park, along the western edge of the island. Visitors can also veer off the shores of Beachwalk Park for a gentle stroll through old oaks, pines, iconic palmettos, and yucca plants. When it’s time to take a break from the sun, head inland to Freshfields Village for top tier shopping and restaurants. 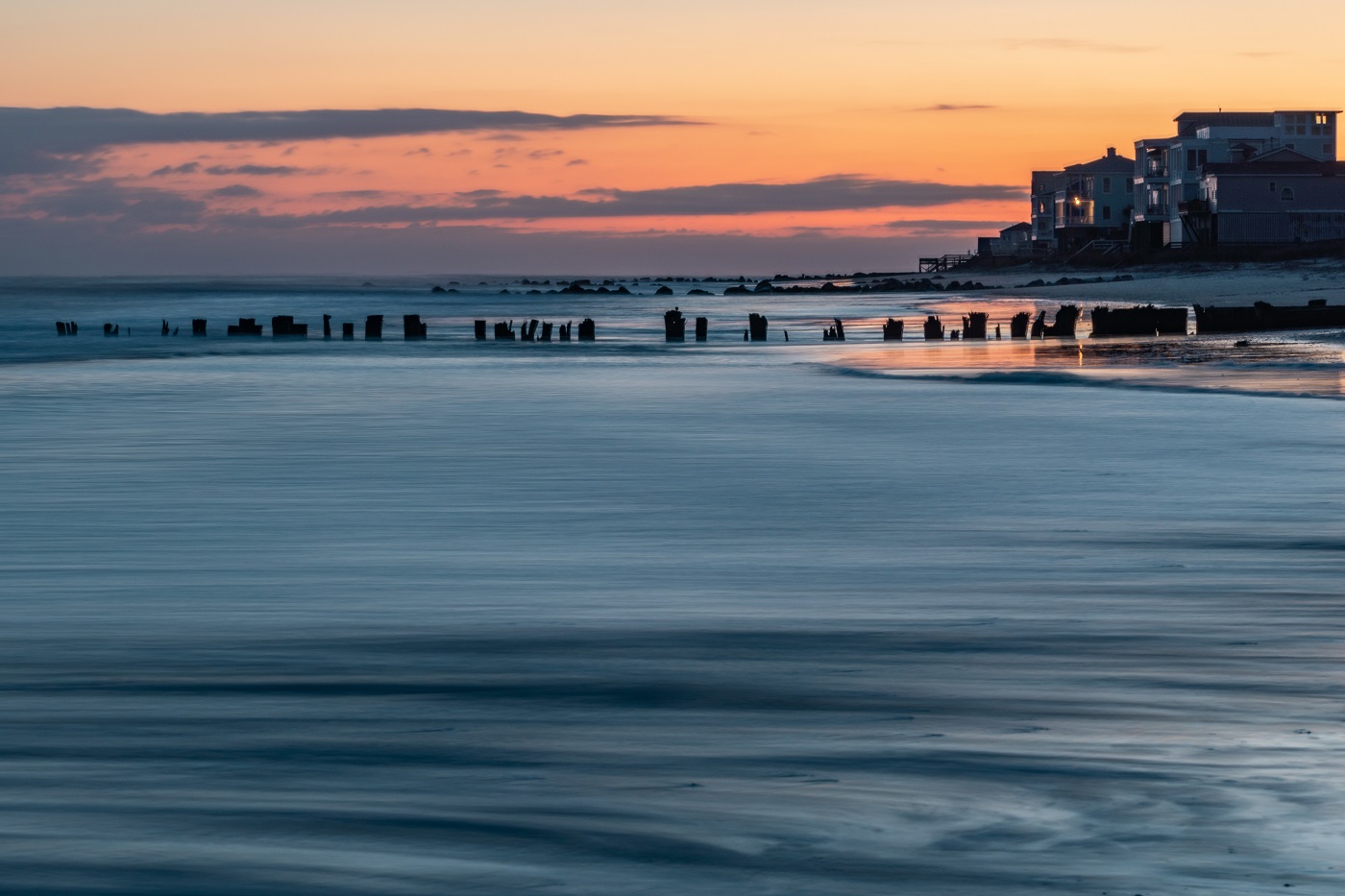 Edisto
Edisto prides itself on being one of South Carolina’s last uncommercialized beaches. Nearly everything—from the restaurants to the lodging—is all locally-owned. Visitors can experience the island in its natural splendor or challenge your mind and learn something new at the town’s famous Edisto Island Serpentarium. Eco tours are available at the island’s state park to take you around the island, and there are scores of cozy rentals perfect for a quiet weekend on South Carolina’s coast. It’s also well located, with Isle of Palms, Sullivans, and Mt. Pleasant nearby, too.

When you head east to North Carolina’s Outer Banks, visiting Duck Beach is a must. Quirky name aside, Duck is a thriving coastal community with an expansive stretch of beautiful beach. Kayak through its unique wetlands, then head back into town to visit the local hotspots. Free of the summer tourists, Duck’s calming waterside boardwalk and local shops will make you feel as if you’ve stumbled upon a hidden island ripe for exploration. Head to the Paper Canoe for some fresh seafood, then indulge in some dessert at Duck Donuts, a local favorite. Book a stay at one of their many water-side accommodations and listen to the waves crash against the shore.