Charlotte Symphony Orchestra’s Music Director Christopher Warren-Green loves music, but he’s also a bold proponent of well-rounded education. We had the immense pleasure to briefly sit down with this champion of the arts. A profound philosopher of music, his fiery passion for the classics is contagious, and our Q&A doesn’t quite do him justice: For a man who spends a great deal of his time physically steering two orchestras in precise silence, he’s a fine speaker.

What are your full titles, where are you from, and how did you end up in Charlotte?
I was born in Gloucestershire, England. I came to guest conduct the orchestra here in 2008, and upon returning home, I told my wife that I really liked this orchestra. Her reply, of course, was something like, “Well that’s nice, darling,” and I said “No, no, I really like this orchestra.” A year later they rang up in search of a new Music Director and, well, here I am. With orchestras, it’s like a marriage, in a way—you gel with some, and some you don’t. There was just a feeling I had with this orchestra. I decided this orchestra was for me. I can work with them…and I love the city! You’ve got two great theatres, a summer symphony park, a great ballet company, a great opera company—I’m like a child in a sweets shop, really. I’ve found that the city’s really lovely, the people are great, and it’s just a great place to live.

What was your first exposure to music, in general?
Church choir. In those days, most local parish churches had a church choir and a choirmaster with a diploma. It was the best music training—singing in the choir. My family really wanted us to play instruments. They knew it was important and, back then, they could hand us violins and the schools would teach us how to use them. Times have changed, drastically and dramatically, and it’s not good. The first generation coming out of schools right now have had no education in drama, or music, or dance…and that’s a disaster. It’s a disaster for the future of humanity, not just the classics.

No kidding—I was never taught to read music. How did you discover the classics?
Well, a little later, I moved on to classical guitar. I discovered The Beatles, whom I thought were wonderful, so I picked up an electric guitar and held onto the classical. The violin came later, and the piano also, of course. Then someone played me a piece on a record player, Ralph Vaughan Williams’ Fantasia on a Theme by Thomas Tallis, and I decided, “I want to play that. I want to be in that. When I heard that…I just… I became a musician, in that moment.

So choir would’ve been the first time you learned to read music, right?
Yes. It’s incredibly easy to learn in a choir. You’re following the choirmaster’s hand up and down and you see the notes going up and down. It’s easier to learn to read music, really, than it is to learn to read and write. In my day, I was taught to read music in primary school, as a youngster, as well as in church choir. At some point, though, the Church of England decided in its wisdom that it needn’t pay male singers, that they weren’t going to pay for organists and choirmasters, and the choirs slowly disappeared. And, oddly enough, their congregations dropped. Funny that, isn’t it?

You entered the scene at just the right time, then. Do you think there was always some inclination within you toward classical music, or was that something that just sparked?
It was in the family. My uncle was a violinist, but he played practically everything. I use the word “catholic” when I describe my tastes, and I’d use it to describe him—meaning he played everything. We all did. Becoming a conductor was an accident, really. I did study conducting when I was young, and I was assistant conducting for a long while, but I truly wanted to be a Concertmaster. I wanted to be a great one, in one of the best theaters. At a point, though, I was doing far more conducting than I was playing, so I finally put the violin down, and accepted the Music Director role. I never chased the career, really. I chased the music. It just happened to me. You don’t really become a conductor until you’re almost sixty, anyway. 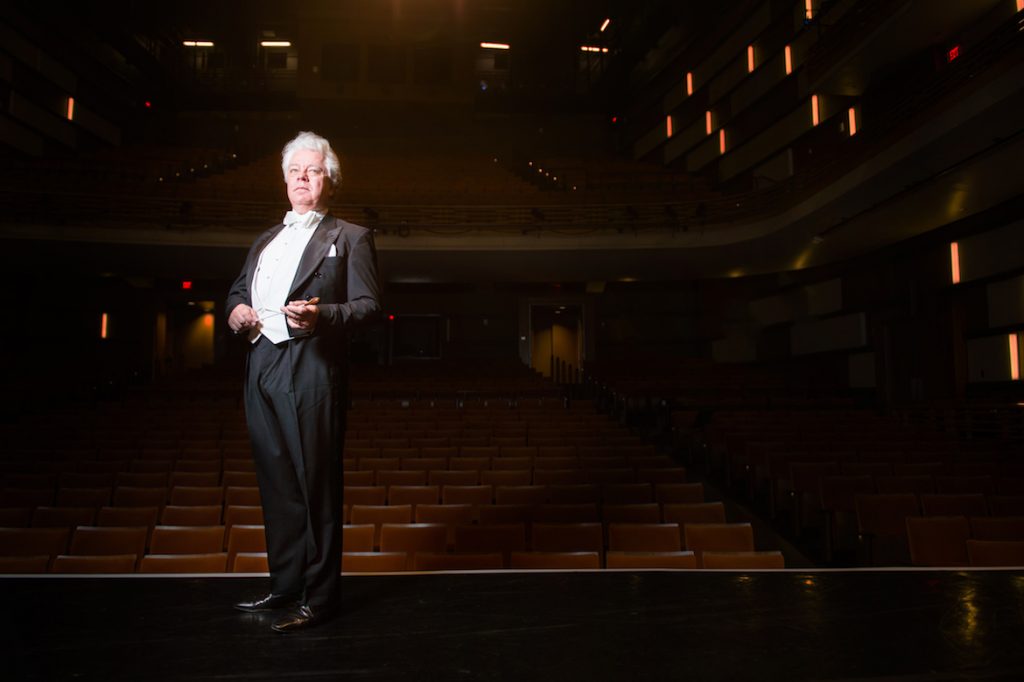 So before sixty, you’re just sort of playing along?
No, no, that’s not entirely true. [laughs] There are some incredibly talented young conductors. When Muti [of the Chicago Symphony Orchestra] was a young conductor, he was really exciting…but even he would say, since he passed 60 a while back, that that is when you really mature as a musician. And your experience really matters—an orchestra can tell a charlatan  in the first two minutes of him standing on the rostrum. They really can. And it doesn’t go well. That’s a whole other story—I won’t lecture you on the art of conducting.

Since you’ve been with the Charlotte Symphony Orchestra, what have you changed?
The big thing I’ve helped create is the “KnightSounds” series. That came with me—we started doing what I call “entry level” shows. You see, the trouble with classical music is that people feel threatened by it. They think that you need to understand it, to know about it going in. And yeah, it’s not going to be as easy to listen to as a four-minute pop single. A composer will take a tune shorter than four minutes and turn it into a symphony that lasts half an hour. It can be complex, and you do need to focus on it, and listen to it more than once. So what we’ve tried to do with “Knight Sounds” is put on a series that’s slightly more accessible. You can bring your beer in. It only lasts an hour. We play classical music, but we play sections. We might play a movement of a symphony but not the whole thing.

How else have you tried to introduce the uninitiated in the city to the Symphony Orchestra?
In addition to KnightSounds, I’ve brought people to the classics, to really complicated symphonies, big pieces played by huge orchestras. I’ve taken many people who’ve never been to the symphony before. When I ask them how they liked it, the response among young people is always “totally awesome,” or “it gave me goosebumps.” And they insist they’d go again, because the threat’s been taken away. It’s getting them in there in the first place that’s tough. Classical music isn’t something you put on in the background; you actually have to sit and focus on it. I’m not saying that rock music isn’t on that level. For instance, my music was The Beatles. Years ago, my twelve year old son came home with The White Album. That’s classic—classic rock. As far as I’m concerned, it’s classical music. It’s stood the test of time, and another generation has picked it up at the same age I did. I couldn’t understand it at the time. I thought, “That’s my music. Why is he listening to my music?” It doesn’t date, you see, and that’s what makes it classic. But you can sort of trip out and dance around and yell and let your hair down at a rock concert. You’re not going to get away with that in a symphony concert, that’s for sure! [laughs] Lots of people assume that the audience for classical music is older now. Well, I’ve been doing this for 43 years, and the audience has always been older. It’s a little bit like religion: People come to it later in life. The problem we’ve got at the moment is that people used to be exposed to it when they were very young. And we’re not doing that anymore. The symphony is doing it—we’re doing as much as we can, but the schools aren’t doing it because governments won’t give them money to do it. What we’ve tried to do is provide a broader selection of music, so that we’re not turning anyone away. I believe you could take anyone to any of the concerts, who’s never been before, and they’d come away thinking, “Yeah, I could do that again.”

What do you think classical music can do for young people?
Let me put it this way: In Pimlico Station in London not long ago, the crime rate was really high. In a rather interesting experiment, the city started pumping out classical music on the station’s speakers, and the crime rate dropped considerably. You could look at that two ways. Either the criminals couldn’t stand classical music and they all ran away…or it just calmed people down, in some ways. When I was younger, I didn’t like explaining to everyone how the classics are good for you. But there is something powerful in classical music. It makes you think with the heart, and that’s true of all music, really. Exposing young people to it at an early age is vital. All art, as they say, is brain-food, and I love that Charlotte is hungry for it. A few years ago, I put on Vaughan Williams’ A London Symphony here—not an exceptionally well-known work in America. As I was leaving the stage after the first rehearsal, one of the custodians at the Belk stopped me and asked, “What is that music? It’s absolutely beautiful.” She looked at me, almost confused, and she said, “I was in tears.” And I just gave her a great big hug. That, I think, is what classical music can do for people.