A lover of the great outdoors, wildlife artist Ryan Kirby is not only a creator of iconic and rare moments but also a bow hunter. Raised in rural Hamilton, Illinois near the Mississippi River, Kirby was a farm-boy.  Corn, soybeans, wheat, and plenty of wildlife, right out the backdoor of our houseit was the best way I can imagine for a kid to grow up, says Kirby.  Now, home is in Cornelius, North Carolina where Kirby resides with his wife, Kim, and their black lab, Georgia.

Kirby was just a kid who enjoyed art class in elementary school when his art teacher, Mr. Mullins, first recognized his talent. When youre that young and the teacher asks the entire class to draw a picture of a duck, and after youre done, your duck looks way better than the rest of the ducks in the class, you start getting recognized for your ability, says Kirby.  As a result, Kirbys grandma asked him to paint a picture of her black lab.  I was 12.  That first painting landed me some commissioned work painting hunting dogs at the local hunt club.  I spent my summers bailing hay and painting English Pointers and Labs as a side job.
After high school, Kirby studied graphic design and multimedia at Bradley University in Peoria, Illinois, but it was the real world work experience that challenged him to grow the most.  Kirby prides himself on reading a lot, pushing himself to try new techniques and approaches in the studio, in the woods, and in life in general. 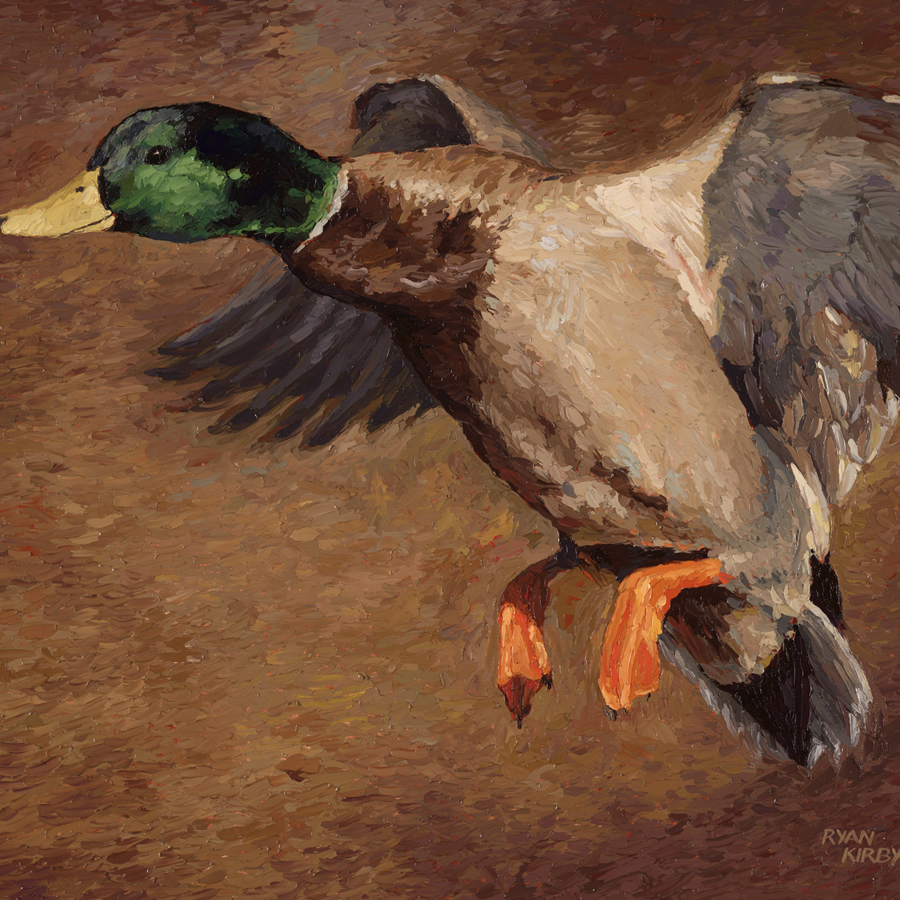 Embracing an identity that is both wildlife artist and hunter suggests a contradiction in terms; however, to Kirby its a natural state.  Hunting and the outdoors is what he loves and knows best.  The two have been one of the purest, most enjoyable and consistent things in my life, he explains.  My dad introduced my brother and me to the outdoors at a very young age. My heart always skips a beat when a buck steps to the edge of a field in the evening or a turkey responds to my hen call just over the crest of a ridge.  Its an unbelievable thrill encountering wildlife on their turf.  Its an adrenaline-filled, inspiring thing that naturally fuels my art.

When Kirby steps into the woods, hes on natures time, not his own.  He considers it a privilege and the most pure moments of life.  It grounds him.  I can exhale, he says.  On a November sunrise from a deer stand, I realize that the sun does not rise and fall on my schedule and that keeps me groundedHiking to the top of a mountain in the pre-dawn during spring, sharing an incredible turkey hunt, telling and re-telling the tale for years around a campfire, these are the great things in life that money cant buy.
Capturing his subjects is a process inspired by his experiences outdoors.  His favorite animal to paint is the white-tailed deer because of it power, grace, and agility; however, Kirby paints other wildlife.  Turkey feathers are tough, he says.  Theyre very iridescent when light hits them and their color changes dramatically in different types and angles of light. 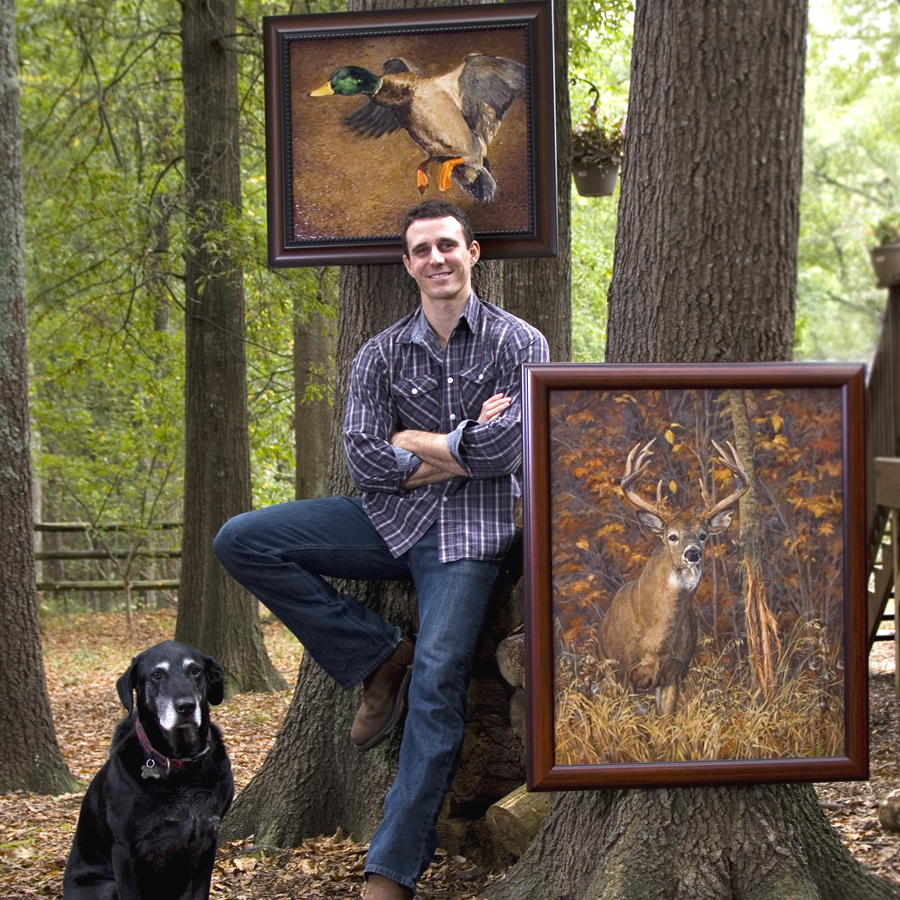 Once Kirby has a clear image in his mind, he starts sketching on paper and culling reference photos of the animal he wants to paint.  Its important that my work be accurate and dead-on, says Kirby.  My work builds on the canvas.  The surface is prepared with a white acrylic gesso.  Then I do a series of quick paper sketches to make sure Ive got the anatomy and posture right.  Next, Ill move over to the canvas and do a more detailed sketch.  Kirby covers the sketch with a light underpainting in a single color, normally Burnt Sienna, an earthy, red hue that warms the overall painting and sets the tone for the rest of the work.  Then, its just a matter of executing the rest of the painting.

Kirbys first job was with the National Wild Turkey Federation in Edgefield, South Carolina as graphic artist and illustrator.  My career was launched during this job, says Kirby, and it brought me south.  The day I left to start my own business was filled with mixed emotion, especially after having been with them for seven years.  They are my friends.  I am honored that they selected my painting, Cupped and Committed, to be part of this years banquet art package.

As an avid hunter and wildlife artist, Kirby considers himself a conservationist.  For some, this is hard to grasp.  The truth is, he explains, hunters are the ultimate conservationists because they truly love the game species they pursue.  Hunters dollars do more to fund wildlife conservation work in this country than anything else.  Most people overlook that.    But Kirby states it clearly.  A great deal of money I raise goes to support wildlife conservation efforts.   I work with and fully support all of themthey play a vital role in protecting our hunting heritage and conserving habitat so that wildlife can flourish. 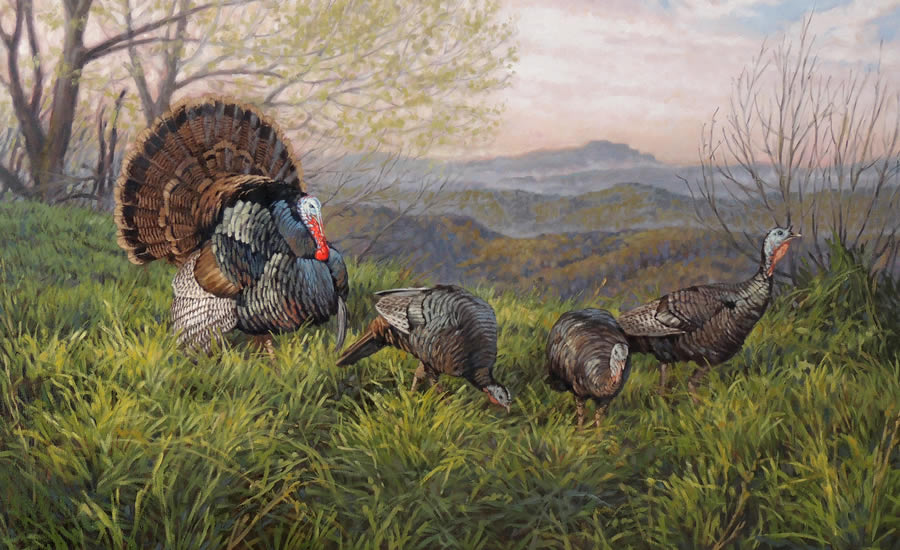 Kirby considers himself incredibly blessed by the shared memories with friends, and the bonding that took place between his dad, and his brother.  Hunting has enriched my life in incredible ways.  I want my kids and grandkids to grow up with the same opportunities, and Ill do everything I can in my time on earth to conserve the game species that I pursue so that future generations can enjoy them.  Im proud to know that even in my young career, my work has raised tens of thousands of dollars for wildlife conservations groups.