Opening a restaurant is hard. Keeping a restaurant up and running through economic downturns and a rapidly changing city is harder. And maintaining a position as one of the best restaurants in Charlotte for twelve years seems almost impossible. But that’s exactly what Greg and Sara Zanitsch have managed to do since they opened the doors of The Fig Tree together in 2005.

All these years later, The Fig Tree remains. With Greg in the kitchen and Sara running the front-of-house operations, the couple (not married when they started this whole thing) have garnered an enviable reputation for some of the city’s very best food—seasonal, perfectly rendered, and ever-evolving. And they’ve done this all while taking care of three children and maintaining the century-old house that contains the operation. 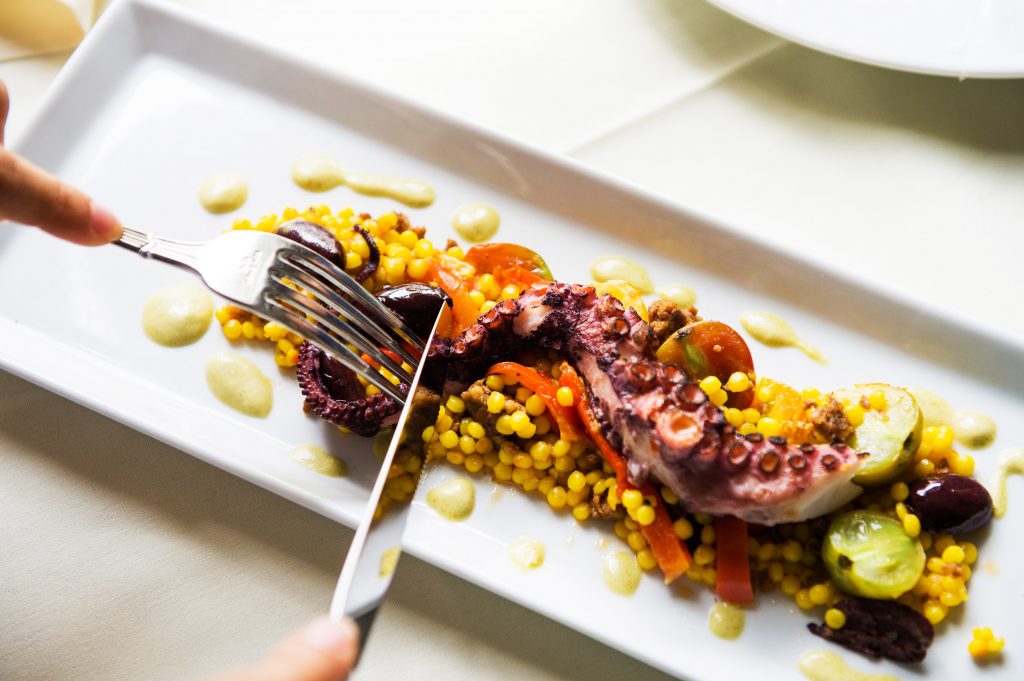 Consistency is the secret behind their success—and so is intentionality. Just from being in their midst for a few minutes, you can tell the Zanitsches didn’t stumble into this thing. The operation was executed with thought and care every step of the way. I mean, who else hands you a leather-bound wine list that looks more like a book than a menu?

“We moved here,” they tell us, “to open this restaurant.”

In other words, the duo didn’t come from Cincinnati because they intended to open any old restaurant and they didn’t move just to move… they brought The Fig Tree into existence because they had a vision in place. And the venue they chose has come to define everything else. They have prime real-estate within Charlotte’s Elizabeth neighborhood, and were able to snag one of Charlotte’s remaining historic homes.

The pre-WWI Craftsman-style bungalow, known as the Lucas House, inspired the restaurant’s name with its four Brown Turkey ﬁg trees on its grounds. The cuisine and classic approach to dining has come to match the century-old house.

“It wouldn’t make real sense to have something crazy molecular on the menu,” Greg says. Instead, he takes French and Italian cuisine and adds his own twist. 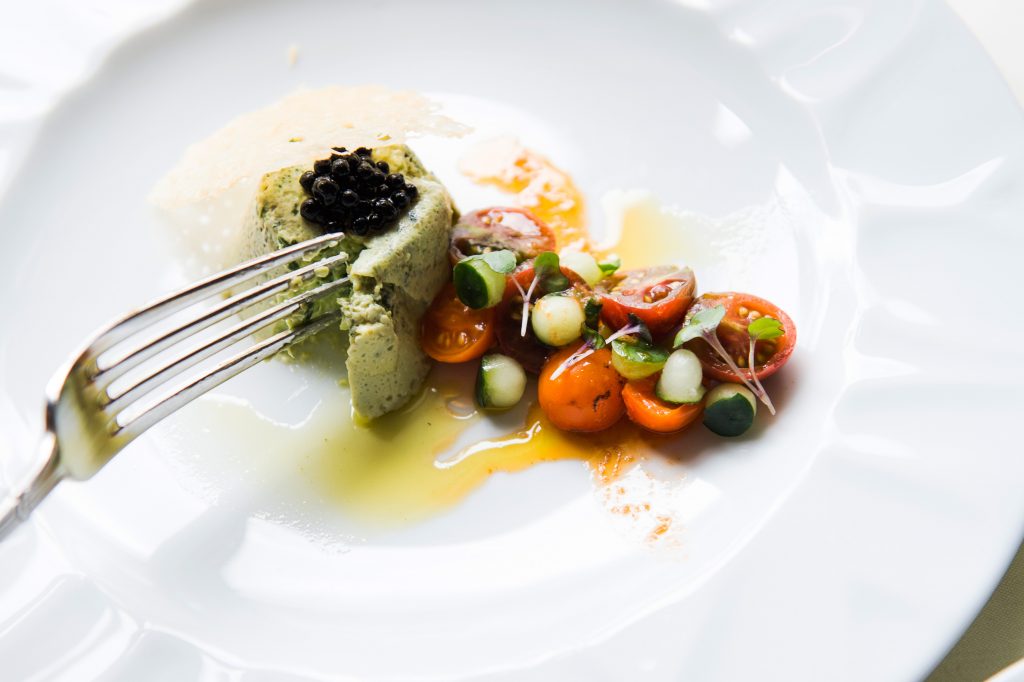 The Zanitsches live and breathe The Fig Tree. The couple and their three children reside in the house literally right next door, not more than a few steps away. On this particular day, the kids sit at the bar eating snacks and slip from room to room, occasionally ducking into the back to visit the pastry chef. Sara and Greg perch at the bar they built drinking iced coffees, and laughing about the little things that go wrong in a home this old. There’s always, they say, something to fix.

It’s not just the food setting Fig Tree apart. Throughout the years, customer service has remained an integral aspect of the restaurant and part of what makes the Fig Tree experience so unique. Using the industry experience the two already had before beginning their own business venture, they were both acutely aware that “fine dining” doesn’t exist without excellent service. 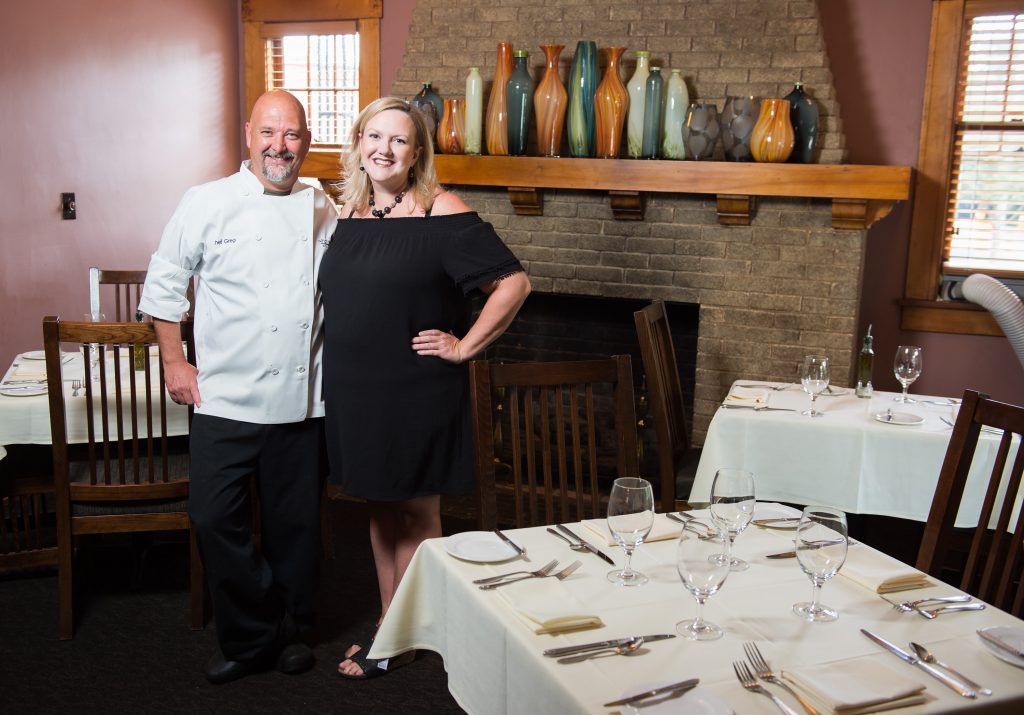 “What’s the difference between a good server and a great server?” Sara asks rhetorically. She then proceeds to deliver one of the most thoughtful soliloquies about service I’ve ever heard: “A great server enters the table space with her eyes first. A good server scans the room and finds the appropriate time to jump in to make an introduction. A good server can look at the table and read what the dynamic is, what kind of time you’re trying to have that night. Is it a 25th wedding anniversary and the two have nothing to say to each other? Or is it a first anniversary and they’re all over each other? One person wants you there the entire time, the other person doesn’t want you there at all. I think truly, genuinely wanting the guest to have the best experience is hard to come by, and that’s what matters most.”

Pretty good, right? There’s a reason she heads up front of house. And when it comes to that infamous menu, Greg is in charge of continuously updating the options to match the seasons… with the help of Sara’s informed critiques. His menu evolves constantly, but beloved standards (like the elk chop) remain. And now, with their ever-growing wine list reaching 975 different wines, even more attention to detail is needed. Both are passionate wine connoisseurs who travel as frequently as possible to Napa, sometimes with staff in tow.

The Fig Tree has been so successful for so long because it’s a family affair in a historic, beautifully restored home. It’s also because it proffers fine dining with surprising new wine pairings, and impeccable customer service. But perhaps most of all it’s because of the Zanitsches themselves, who take the whole thing day by day.