With an eye for family-oriented builds (and an ear for the family), custom luxury home builder Gerrard Builders renovates this Myers Park home.

We love good design. Oftentimes though, in our line of work, we obsess so fully over the design of a house that we forget it’s a home. We see the brilliant utility imposed on a living space by visionary designers and builders, yet we forget that someone lives in it.

Bryan Gerrard doesn’t forget, though. Actually, the head of Gerrard Builders would be extremely hard pressed to forget about his clients: He and his team work with clients daily for months, constructing a home around a family, until…well…until they’re all practically family. For Myers Park’s Noe family, this kind of dedication was a welcome surprise. 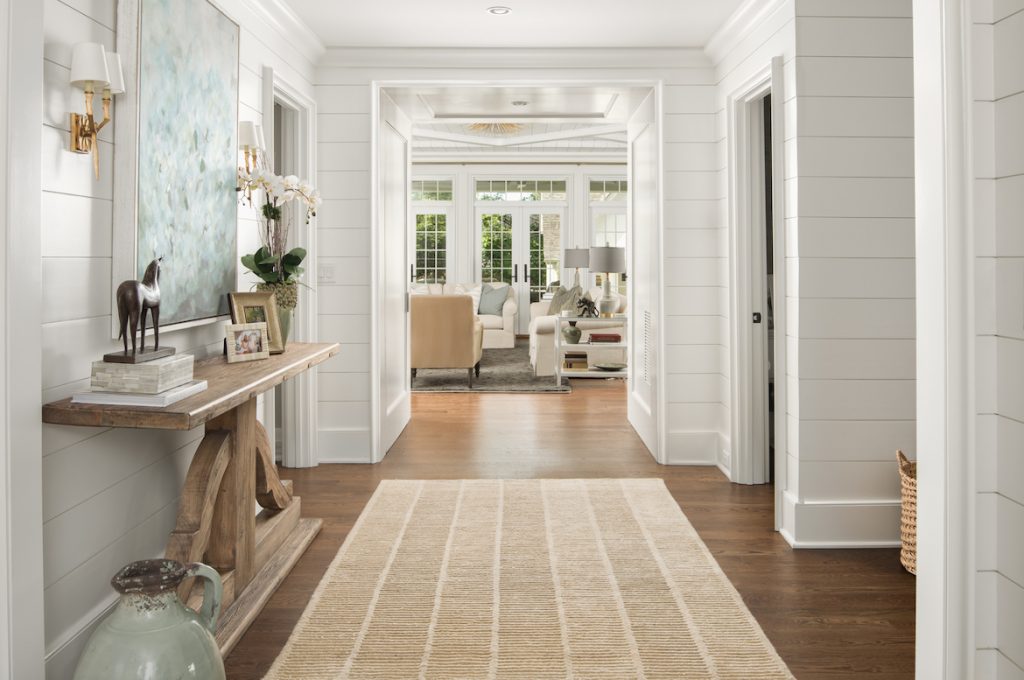 “We got lucky, really,” Joey Noe says. “We assembled a dream team, almost by accident.”

That team consisted of Gerrard Builders, Don Duffy Architecture, and designer Shannon McCarthy Bowman, formerly of Carolina Design Associates. Joey and Valerie Noe were set on a circa 1930s property on Hillside Avenue, but the English Tudor home situated on that lot granted this young family a bit less space than they needed. After some deliberation with the experts, they settled on a renovation rather than a new build—ultimately expanding the original home by 2700 square feet.

Today, the home has graduated into a modern English cottage, something out of the countryside brightened with coastal touches. The Noe house expressly takes advantage of the space that already existed, embracing all the oddness and character of the old property. The original entry’s eight-foot ceilings, which probably wouldn’t make it into most new builds in the 21st century, really work to create a cozy, farmhouse feel as one enters the home—an aesthetic that the Noes wanted replicated throughout. 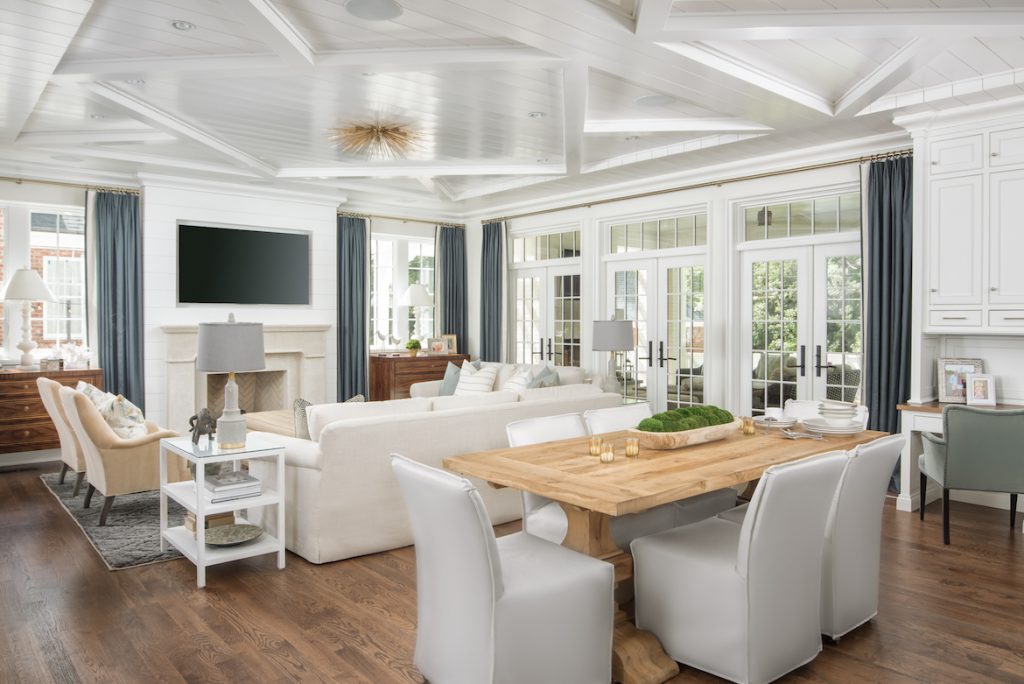 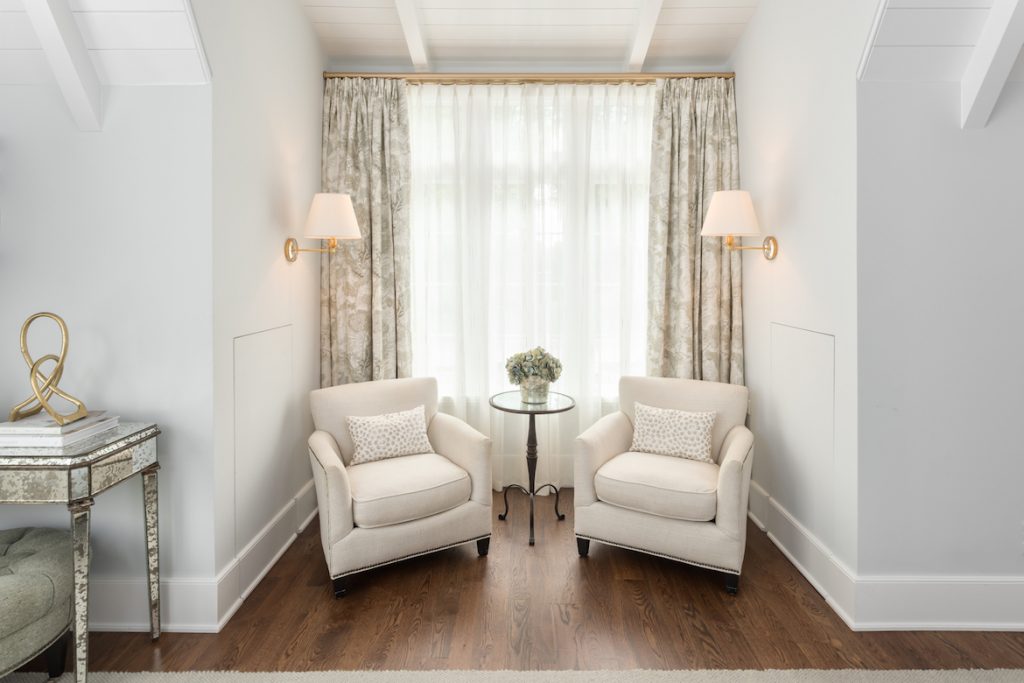 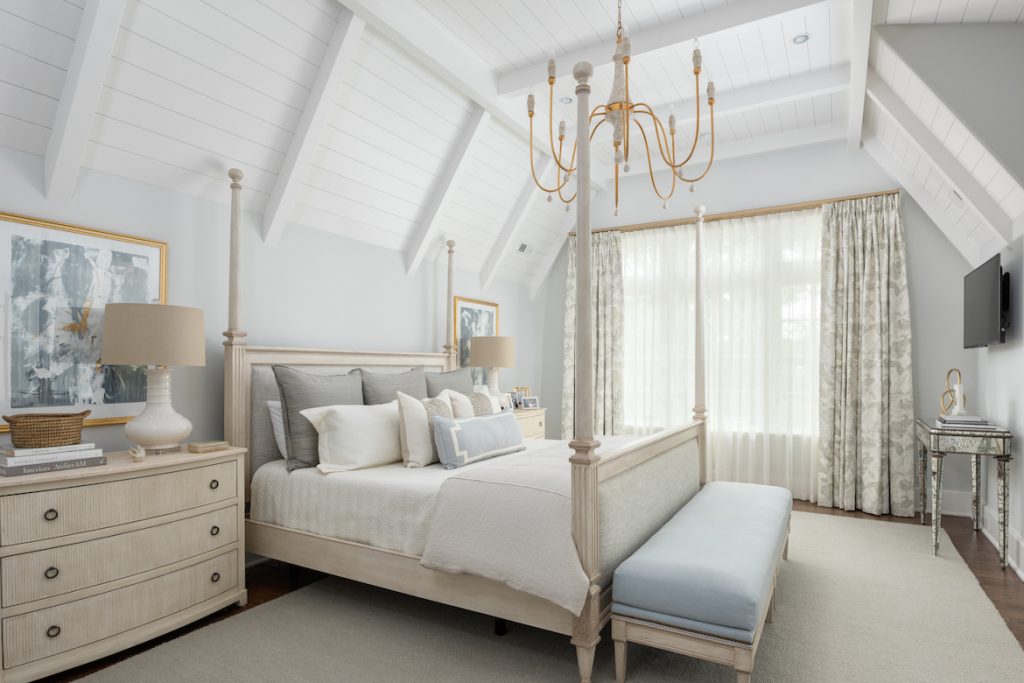 For the addition, on the other hand, the builders took advantage of what Bryan calls “dead spaces,” open space that, in the architectural drawings, are meant to serve no purpose. The Noes wanted to expand this home so that their new family would have room to live. So when they saw these unused spaces through the fresh timber and the struts, they turned to their dream team with last-minute changes. In one such instance, the second story’s centermost room had yet to be ceilinged off, meaning the various pitches of the home’s roof remained exposed.

We got lucky, really. We assembled a dream team, almost by accident.” 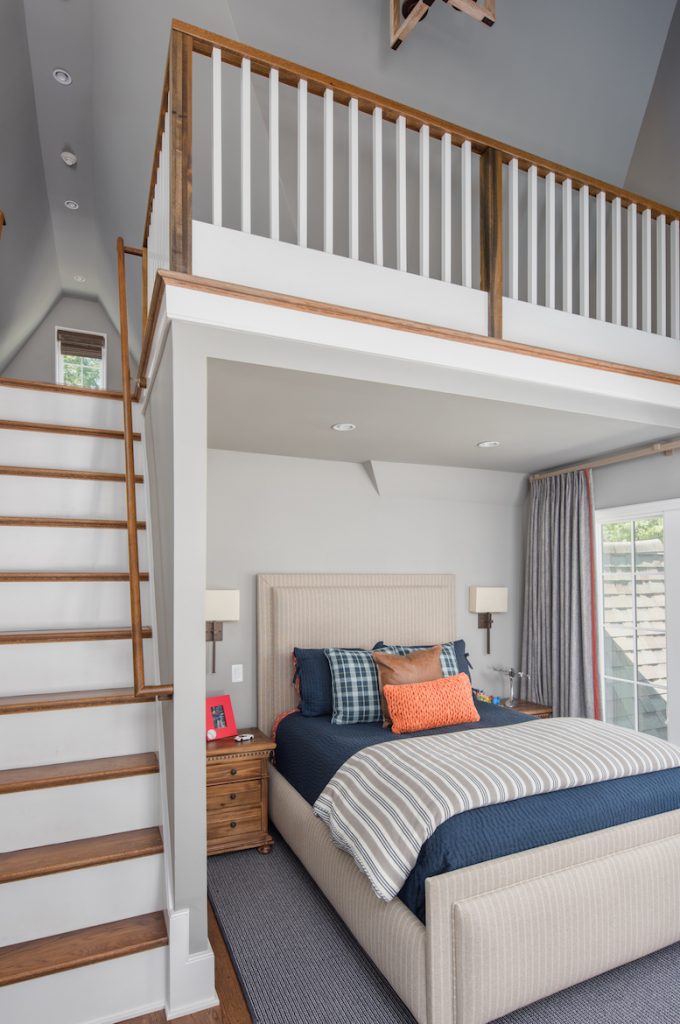 “That kind of character,” Bryan explains, “was exactly what they loved about the home in the first place.”

The room was seemingly small, but (as evidenced by the finished design) not vertically. The Noes went to Shannon McCarthy Bowman with the idea for a loft, suspended in the pitch of the ceiling: Shannon drew it up on the spot, Bryan priced it, and the Gerrard crews got to work. Now, Valerie says, it’s easily the most interesting room in the house. At this point, the Noes expected such ingenuity from their designer and builder: In the custom-designed (and custom-built) mantle, in the crisscrossing beams of their shiplap ceiling, they’d already begun to see what this collaborative process could yield. That room upstairs was just more evidence of this group of homemakers operating at peak performance. 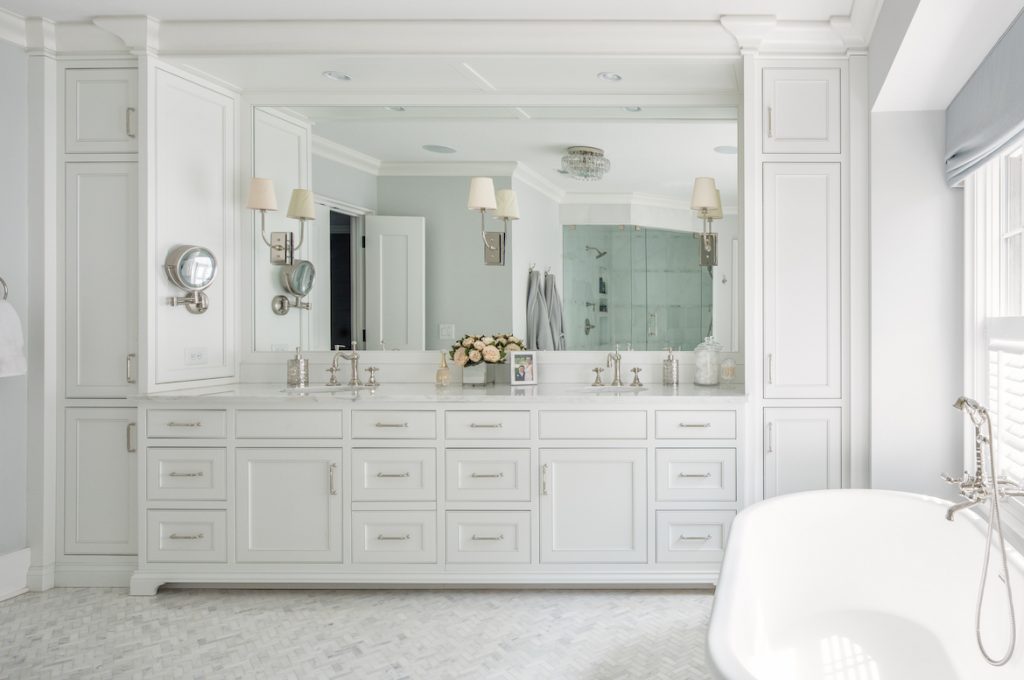 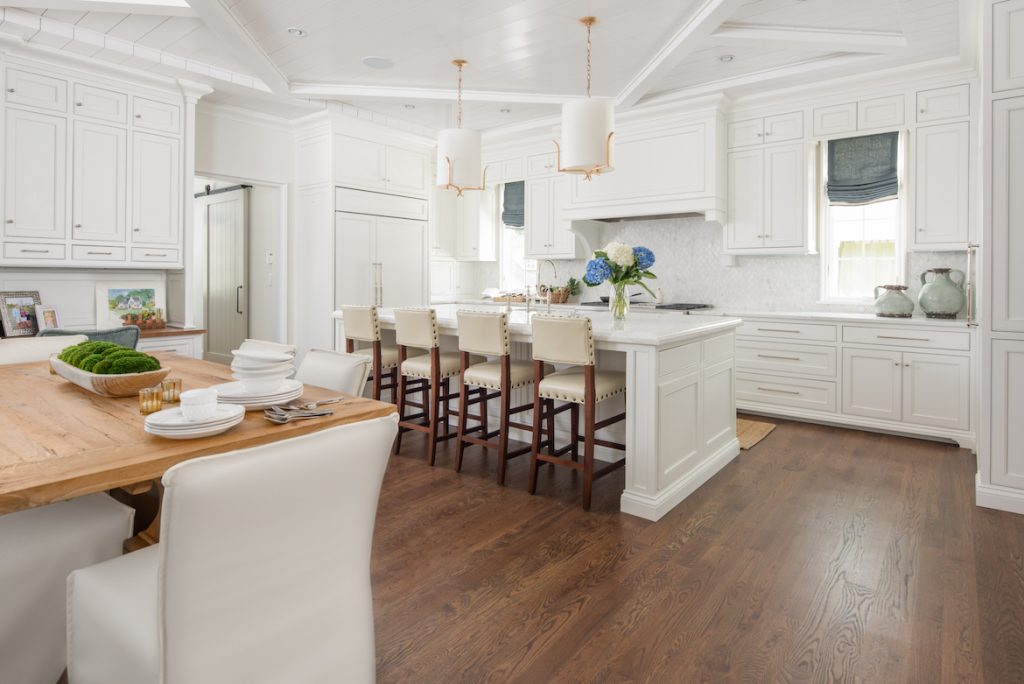 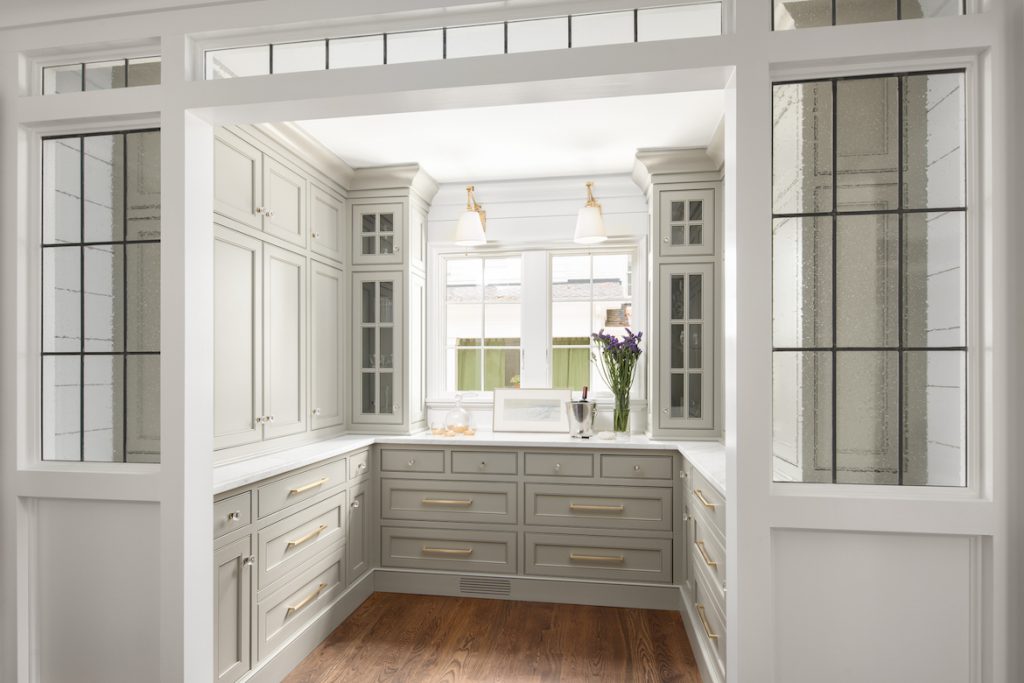 “I can’t express how incredibly well the team worked together,” Joey stresses. “Every now and then, I’ll catch a cooking show, and… When someone cooks angry, it tastes like garbage. I feel like nobody here was designing or building angry. Everyone was on the same page, fully aware that everyone else was working their tails off, and the result was something we couldn’t have imagined. The house just lives.”

It’s true. With the exception of the guest room, the Noes use every room in the house—everyday. 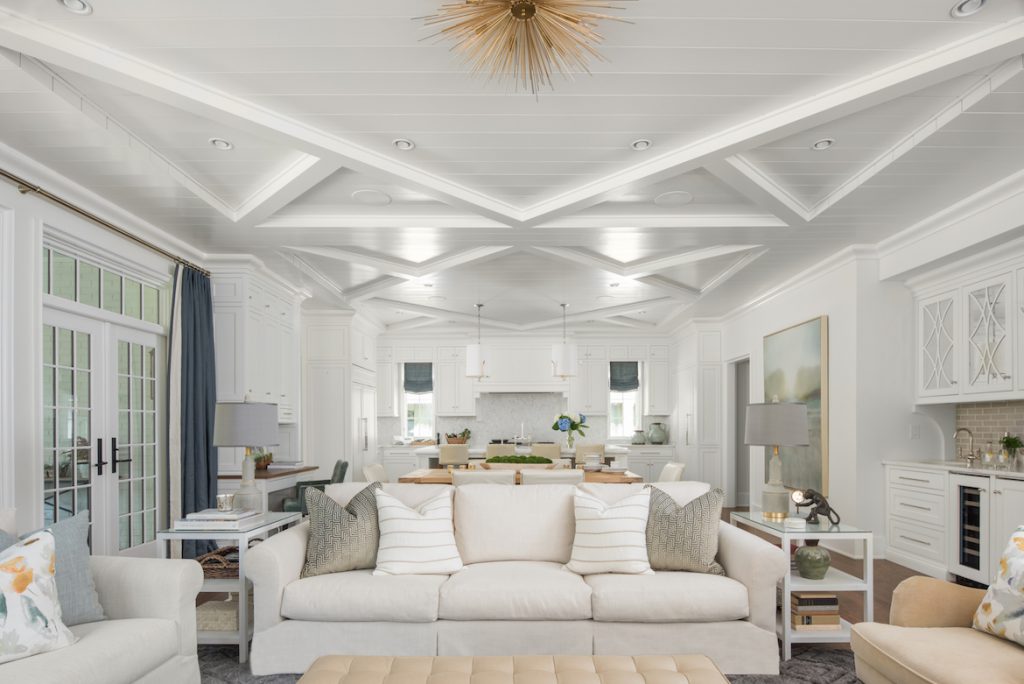