Perched on a street where chains like Panera Bread and Moe’s duke it out alongside local digs like King’s Kitchen and Hazelnuts Creperie, Charlotte Marriott City Center is well-positioned for the company’s rebranding efforts, which seek to engage “the next generation of travelers.” At Charlotte’s Marriott, part of that effort includes luring Charlotte residents into the building with food and drink prepared by local proprietors.

Stoke, one of Charlotte’s newest restaurants, is one such venue located within the Marriott. Local, sustainable, and seasonal — the three words Stoke uses to express its values, vision, and character — have become buzzwords in today’s culinary vernacular, often deployed for instant approval from the Millennials, a lunge toward the coattails of a fad. However, at Stoke, these concepts aren’t gimmicks; they are ingrained in the refreshingly authentic identity of the restaurant. 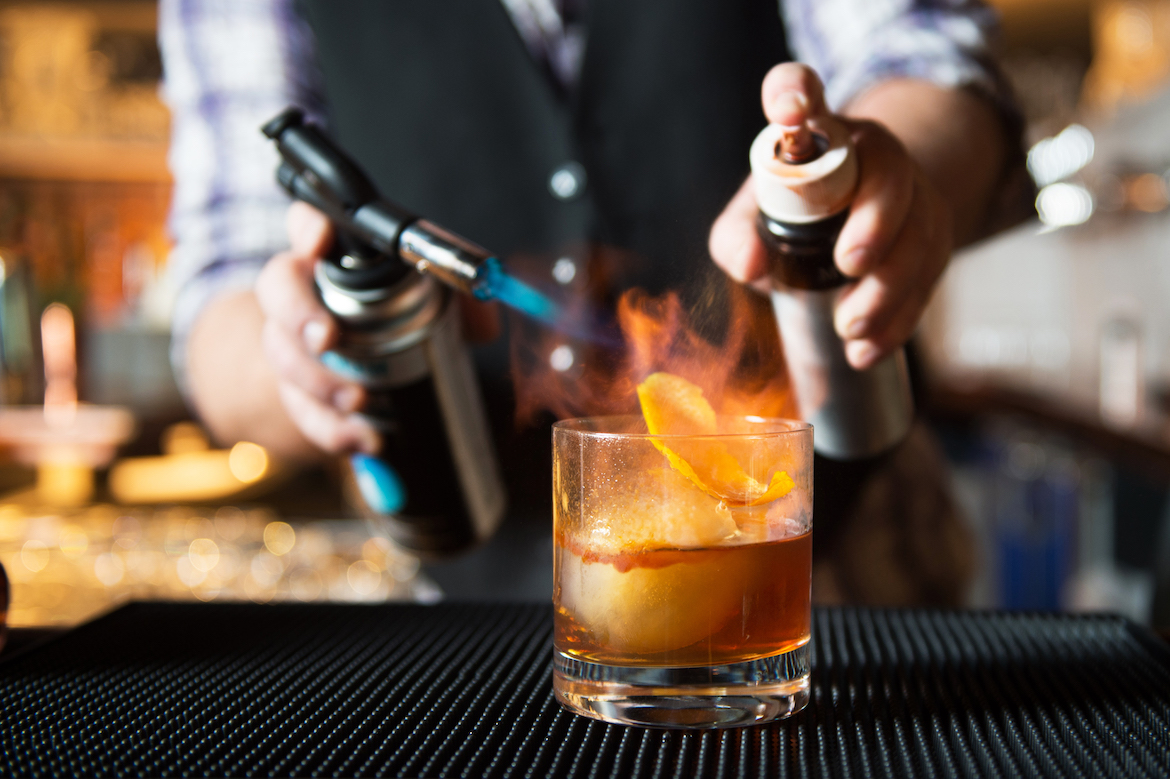 This very real dedication to local-sourcing and sustainability is championed by the restaurant’s head chef, local culinary celebrity Chris Coleman, who has been an influential member of Charlotte’s food scene since 2004. When he transitioned from his most recent culinary venture, The Asbury, to Stoke, he brought a few dedicated employees along. He’s also managed to maintain ties with many of the local farmers with whom he has worked for the last five years and. In doing so, he’s preserving relationships that blur the line between personal and professional, local and corporate.

My fondest memories of eating are sharing around my grandmother’s table… We’d grab and pass.

Coleman understands the importance of farms that skew toward subsistence and away from industrialization. He’s seen firsthand the kinds of personal connections that can emerge through working with these farms, since his childhood summers were spent at his grandparents’ farm in Mississippi. “We ate PawPaw’s beef, we ate eggs from a neighbor’s farm, we helped MawMaw can peas,” he recalls. “It was cool but not in an overtly ‘locavore’ way; that’s just the way they lived.” 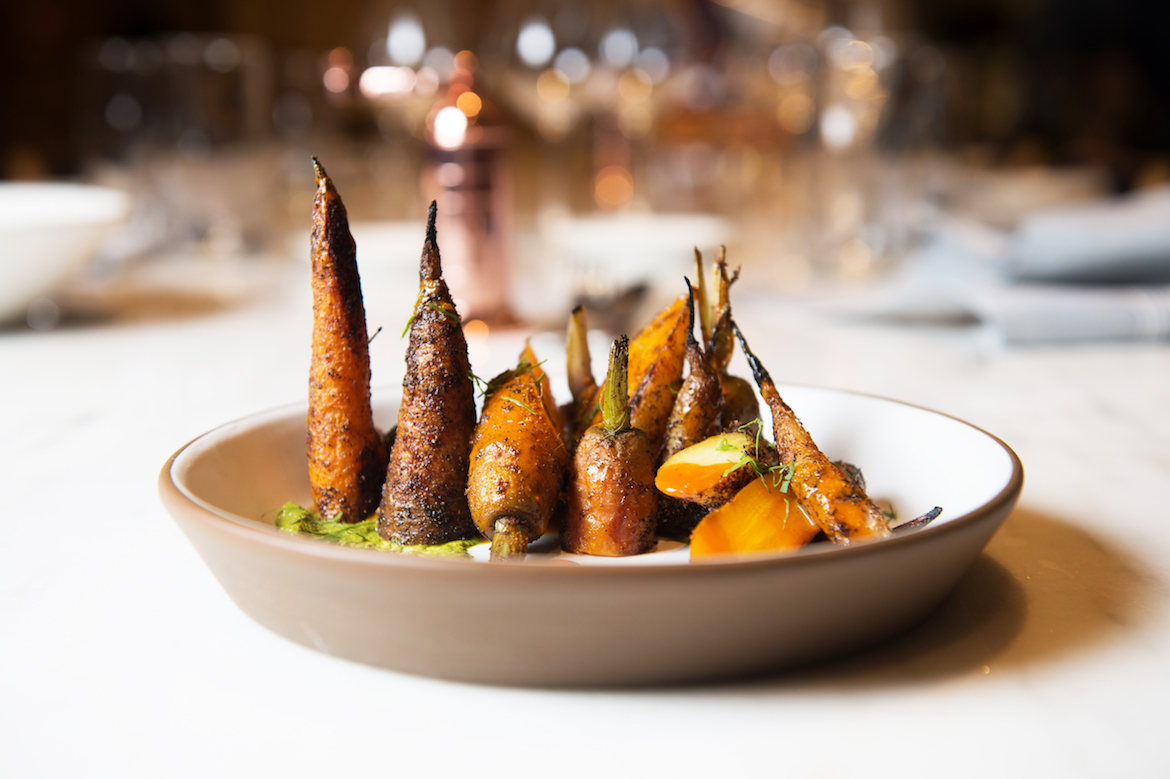 Coleman’s love of food is palpable. He speaks of vegetables as though they are his own children, expressing as much affection for his flashy, all-American summer tomatoes as his bespectacled fall squash. Armed with a deep appreciation of ingredients in their simplest form, Coleman is able to combine flavors in unexpectedly delectable ways. A popular dish is the sticky pork shank, which features tender meat braised with sorghum, chiles, and burnt orange. Arguably an any-season dish, this melty meat bliss pairs well with one of the many local beers on tap.

One person could single-handedly consume most portions at Stoke (barring The Doughnut, a one-pound heap of fried dough topped with diplomat cream and Heath crumbles), but Coleman intends for each table to order multiple dishes and share them, family-style. “My fondest memories of eating are sharing around my grandmother’s table,” he says. “There’d be a pile of pork chops or a bowl of chicken and dumplings and we’d grab and pass.” For Coleman, eating is, above all else, a social affair.

Ours is a blue-collar profession. We stand around a hot fire, we work with our hands, and we haul 50-pound sacks of flour and sugar. 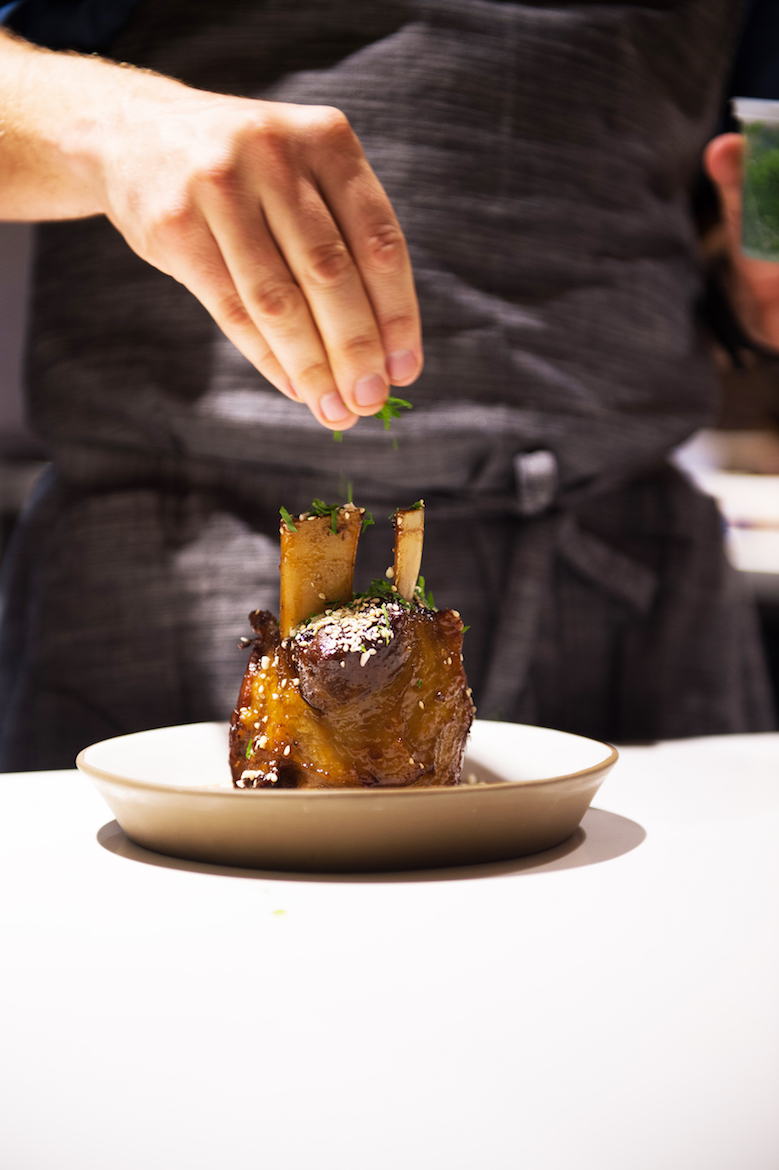 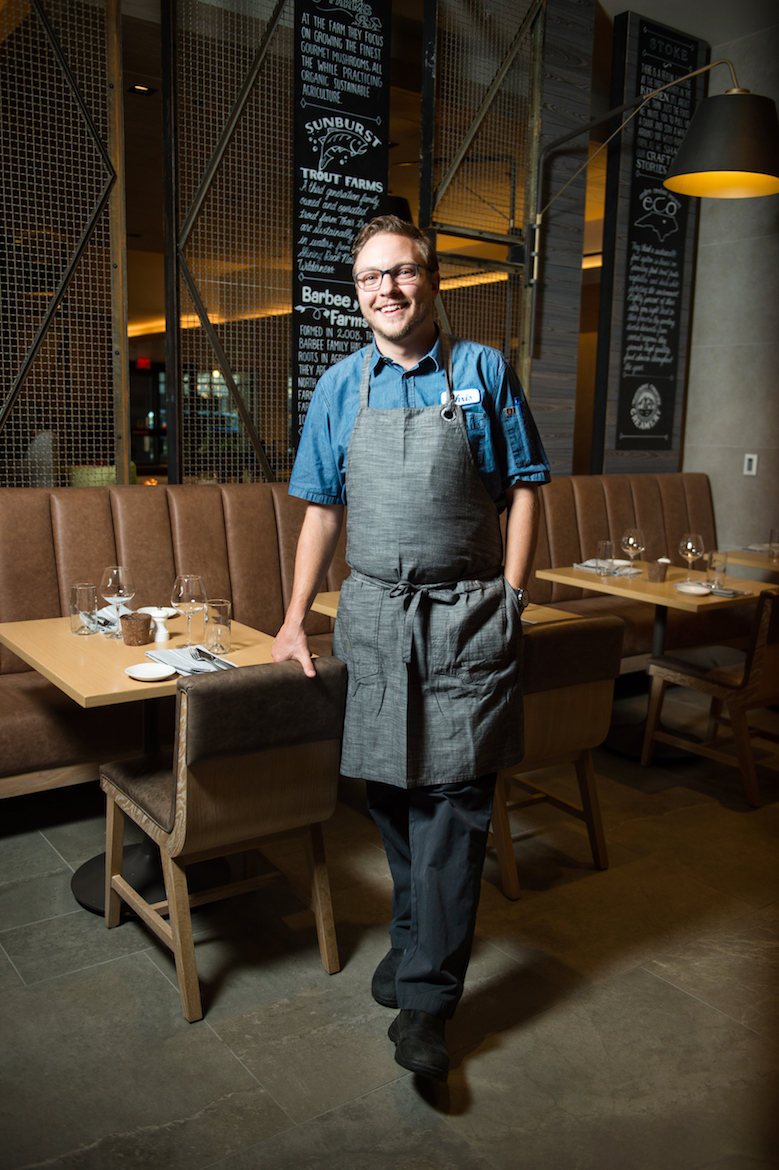 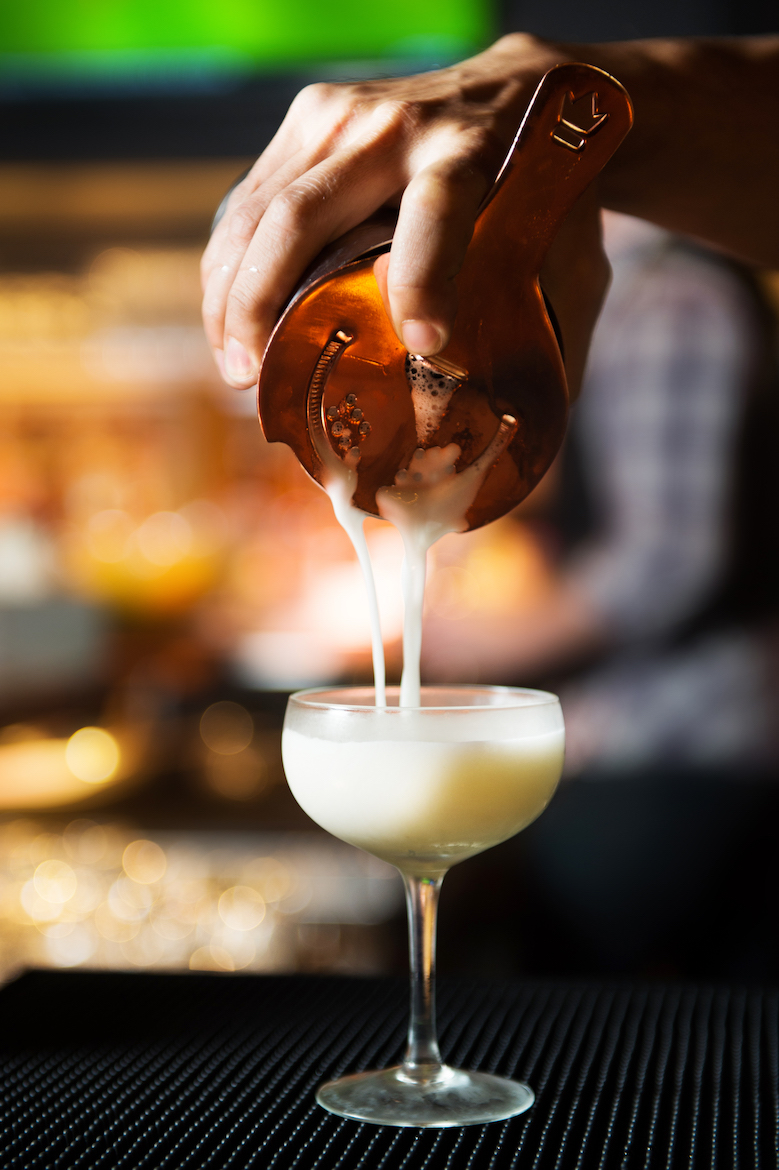 Intrinsic to a commitment to local and sustainable foods is the formation and maintenance of community, something that Coleman has mastered. From the farmers and brewers to the kitchen staff and guests, Stoke is a place where relationships are forged over food. Hang around until 10:30 on a bustling Saturday night, and you’ll see the kitchen staff whip up a batch of pasta and scarf down a well-earned communal meal before clean-up.

This nightly ritual is visible because the restaurant revolves around an open kitchen layout. Guests are privy to every detail of the cooking process, be it hairy or glorious, which necessitates a certain type of employee personality. Coleman’s staff sweats silently by the wood-fired oven, immersed in whatever task is at hand, outfitted in an ensemble reminiscent of a car mechanic’s, replete with no-flare, blue, denim button-ups and grey-and-black mesh trucker hats. The uniforms were Coleman’s idea, an extension of his blue-collar formulation of kitchen work. “Ours is a blue-collar profession,” Coleman asserts. “We are on our feet for 12 to 14 hour periods, we stand around a hot fire, we work with our hands, and we haul 50-pound sacks of flour and sugar.” 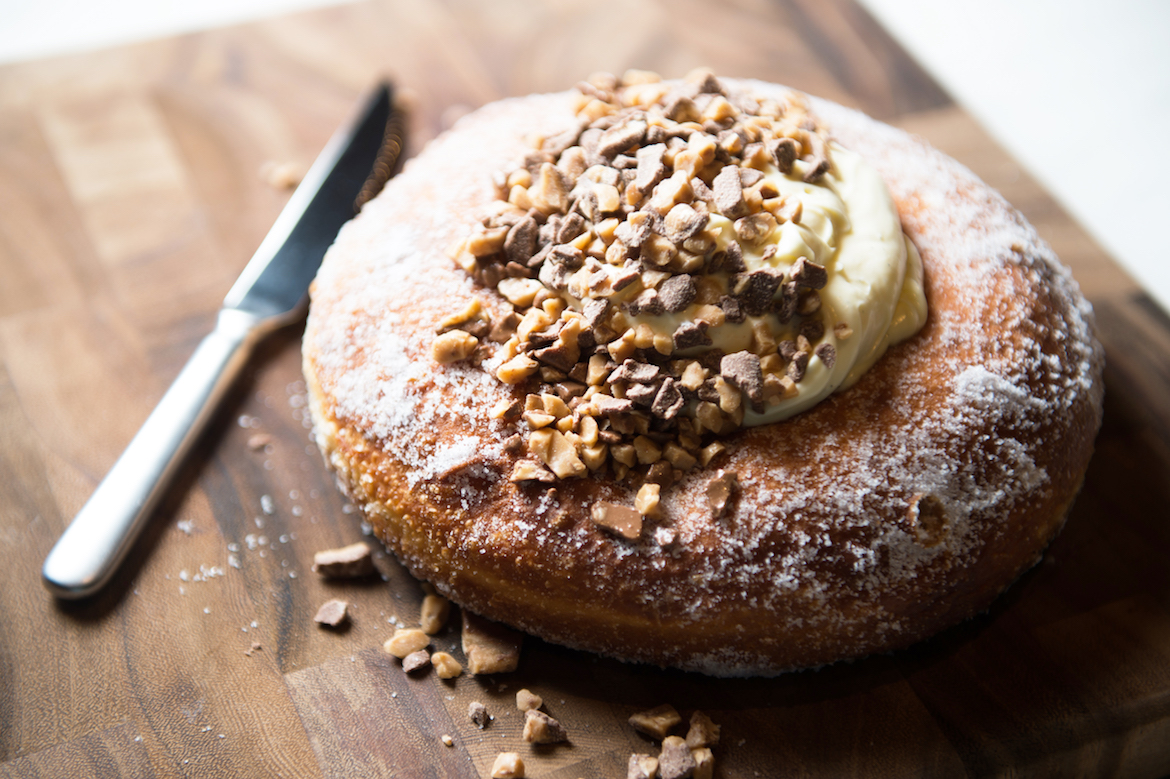 For any other celebrity chef to call culinary work “blue collar” might be a stretch, given the opportunities afforded to chefs and denied to the average blue collar worker, but because Chris Coleman is such a thoroughly hard-working, gently self-deprecating, farm-boy-at-heart Charlottean, the way he lives his profession indeed evokes the hard work and humility typical of a blue collar existence.

We want to show that local sourcing can be accomplished in a larger space with a lot of traffic. It’s a logistical challenge, but if more larger restaurants took it on, we could move this region’s farming culture along significantly.

“We want to show that local sourcing can be accomplished in a larger space with a lot of traffic,” says Coleman. “It’s a logistical challenge, but if more larger restaurants took it on, we could move this region’s farming culture along significantly.” Coleman and the Charlotte Marriott are carving out a space at the convergence of corporate and indie cultures, blue collar and artisanal, modeling a newly symbiotic relationship that other cities could and should strive to emulate. 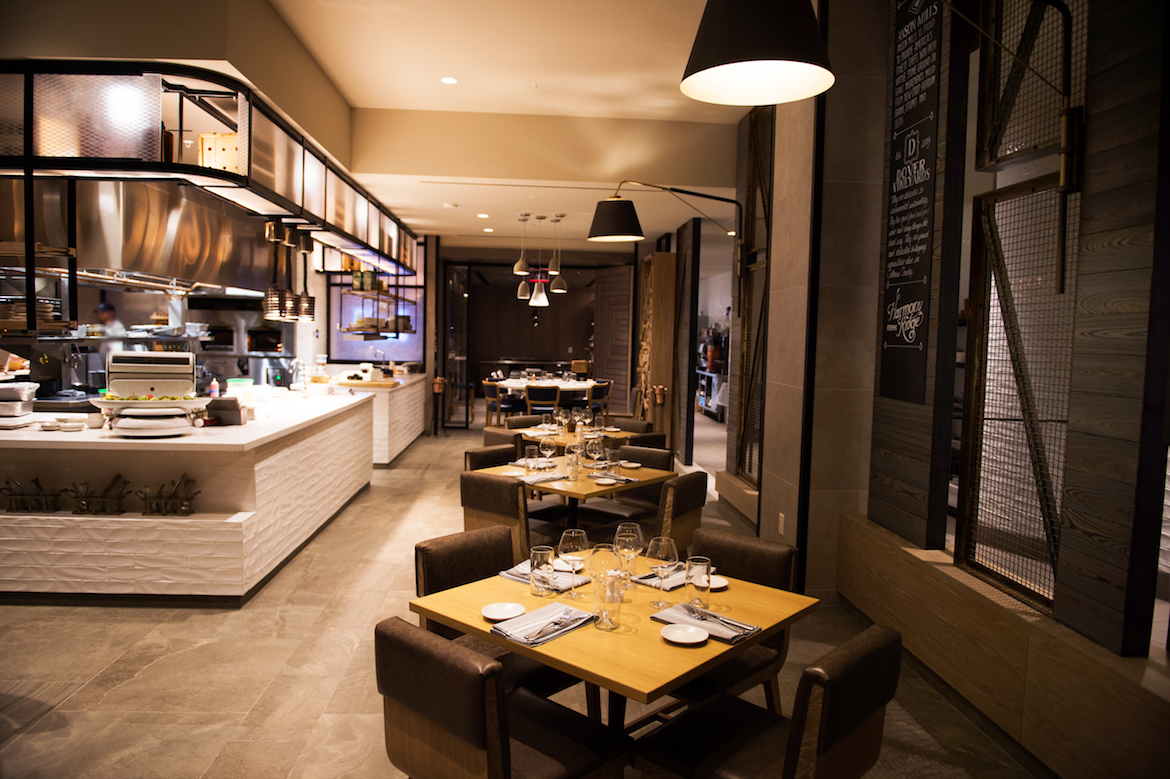