Years ago, in the heat of the unforgiving summers outside of St. Louis, Jesse Leadbetter didn’t particularly enjoy working on his grandparents’ farm. Like many of us who grew up shirking our chores at every opportunity, he dreaded the work that farming presented, even on the smallest of scales: snapping beans, shucking corn, canning tomatoes—these things kept him from more important kid activities.

Fast forward several years: Jesse has moved halfway across the country, but not to escape working the land. Together with his childhood-friends-turned-business-partners Brad Chapman and Josh Cochran, he’s spearheading a movement in Charlotte that will—he hopes—completely change the way local farming operates. Their company, Freshlist, is a platform designed to streamline the ever-evolving farm-to-fork movement, while also reconnecting communities with the local sources of their food. With Freshlist, Jesse Leadbetter is now staking his career on the farm.

So, what happened? Well, Jesse started growing things. Lots of things. And that showed him how to cultivate a life outside of his corporate one.

“When I was in my late 20s, I was trying to find what kinds of things made me happy,” Jesse reminisces. “There was something I loved about planting a seed in the ground and growing my own tomato. All of a sudden, I’d made something, I’d brought something to life. In corporate America, all the work that I was doing was on spreadsheets; I wasn’t creating anything tangible. So there’s something special about actually farming and getting your hands dirty and getting back to the land, so to speak.”

While taking his own stab at cultivation with a small urban farm, Jesse started to really care about where his food came from. He got two kinds of gratification from his new undertaking—first, that growing your own food is actually incredibly fun and fulfilling, and second, that the stuff you grow is often delicious.

There was something I loved about planting a seed in the ground and growing my own tomato. All of a sudden, I’d made something, I’d brought something to life. 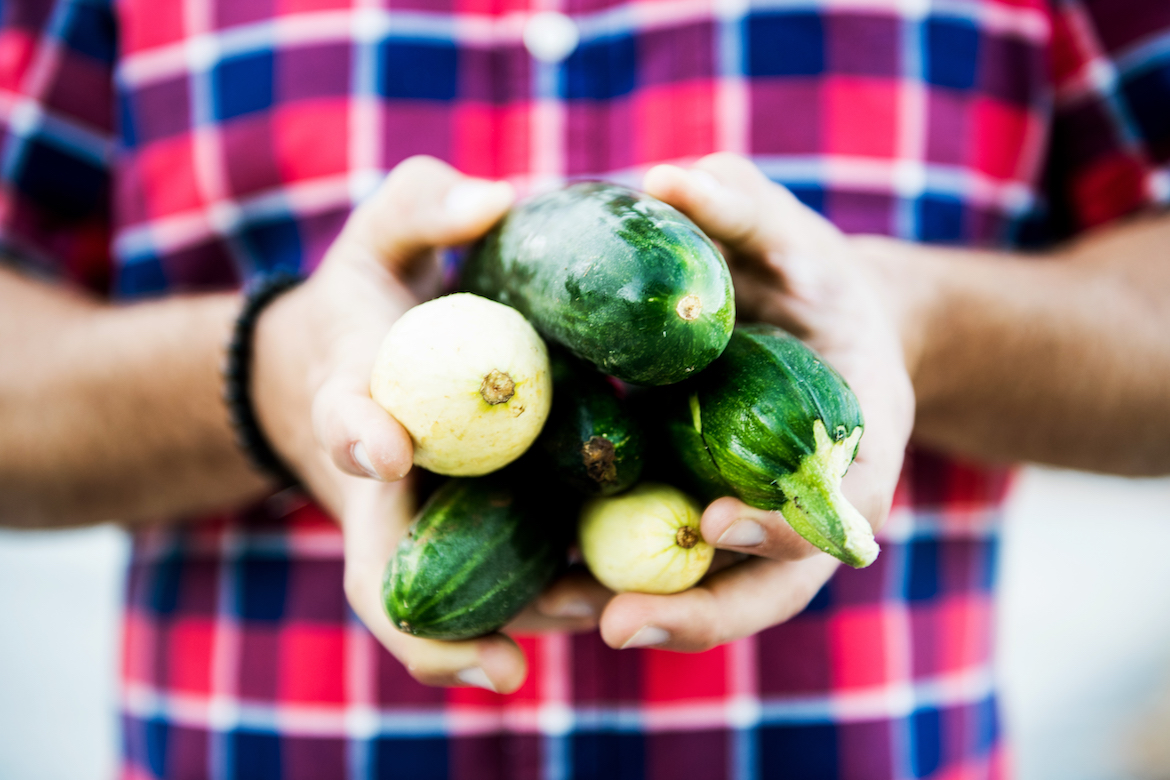 “When you taste that tomato…it’s nothing like what you buy at the store,” Jesse swoons. “So the logical next thought was: Where can I get this kind of thing around town? Who else is paying attention to this?”

That answer came in the form of a hearty meal at then-newly-opened Heirloom Restaurant. Jesse’s first encounter with a wholly local restaurant experience introduced him to an important player in the farmer’s life, and a kind of artisan he’d yet to really encounter: the chef. A chat with leading locavore Clark Barlowe was the beginning of a much longer conversation with the Charlotte food scene at large. 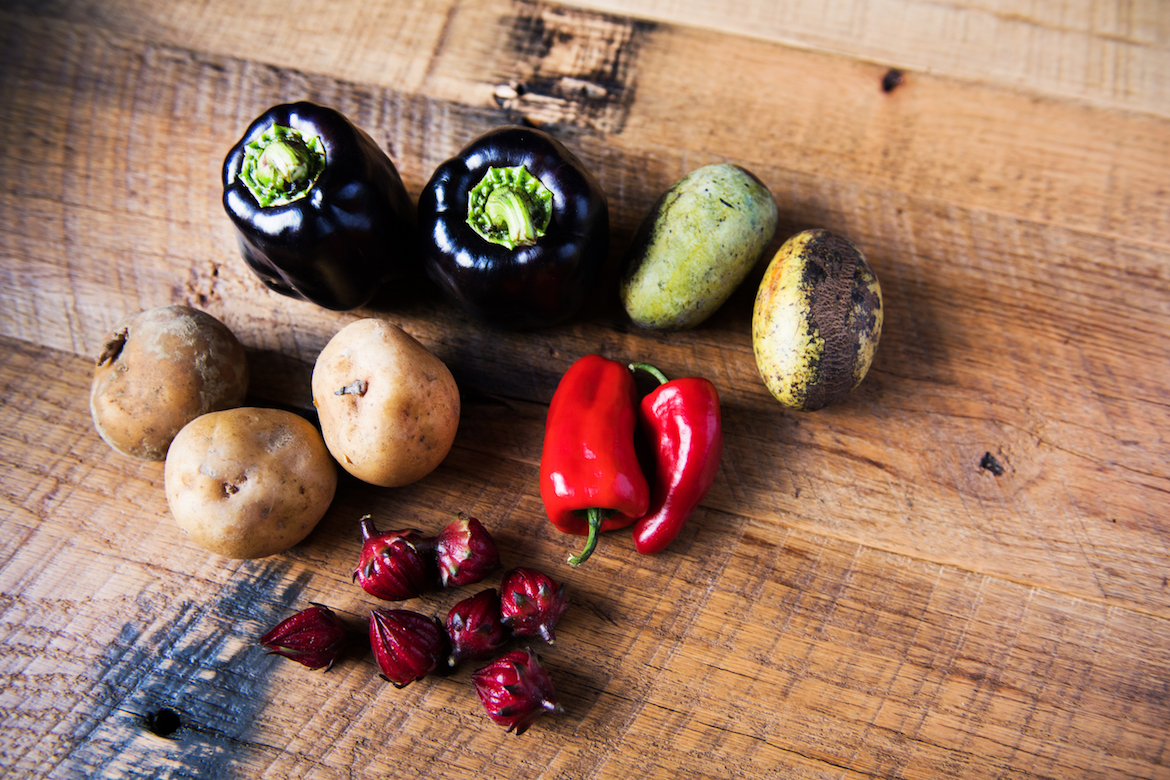 Charlotte restaurants have been sourcing locally for some time, turning back to practices that used to form the bedrock of the food industry. This movement, of course, is a boon for local economies: Charlotteans eat meals prepared by local chefs using produce from local farms. Everyone sends their food dollars right back into the community. That’s the ideal, anyway.

A closer look at local food (and the increasing demand for it) is revelatory: After personally getting to know some of these chefs and farmers, learning how these operations work both together and on an individual basis, Jesse saw a problem. They were working within an industry that didn’t really seem to work for them. The appeal of massive foodservice distributors like Sysco and US Foods is obvious to those who are actually part of this industry, those faced with the innate challenges of remaining local. Chefs who are sourcing locally place their orders in a myriad of ways: text, email, phone calls, even a lengthy drive to the outskirts of the greater Charlotte area. These informal methods of doing business, while neighborly, are hardly efficient. Chefs maintain friendly, almost familial relationships with several local farms, but their preferred pool of farms can’t always provide certain ingredients in the quantities they need. At the same time, local farms often have a surplus of various crops that, if not purchased, become waste. Once orders have been placed, pick-up and delivery remain the responsibility of the farm or the restaurant. Farm-to-fork is in its infancy—with this many kinks to work out, that much is clear—but Jesse Leadbetter believes the initiative is at a crucial turning point. Part of the problem with the trend is that it is a trend, and everyone’s struggling to keep up with it. 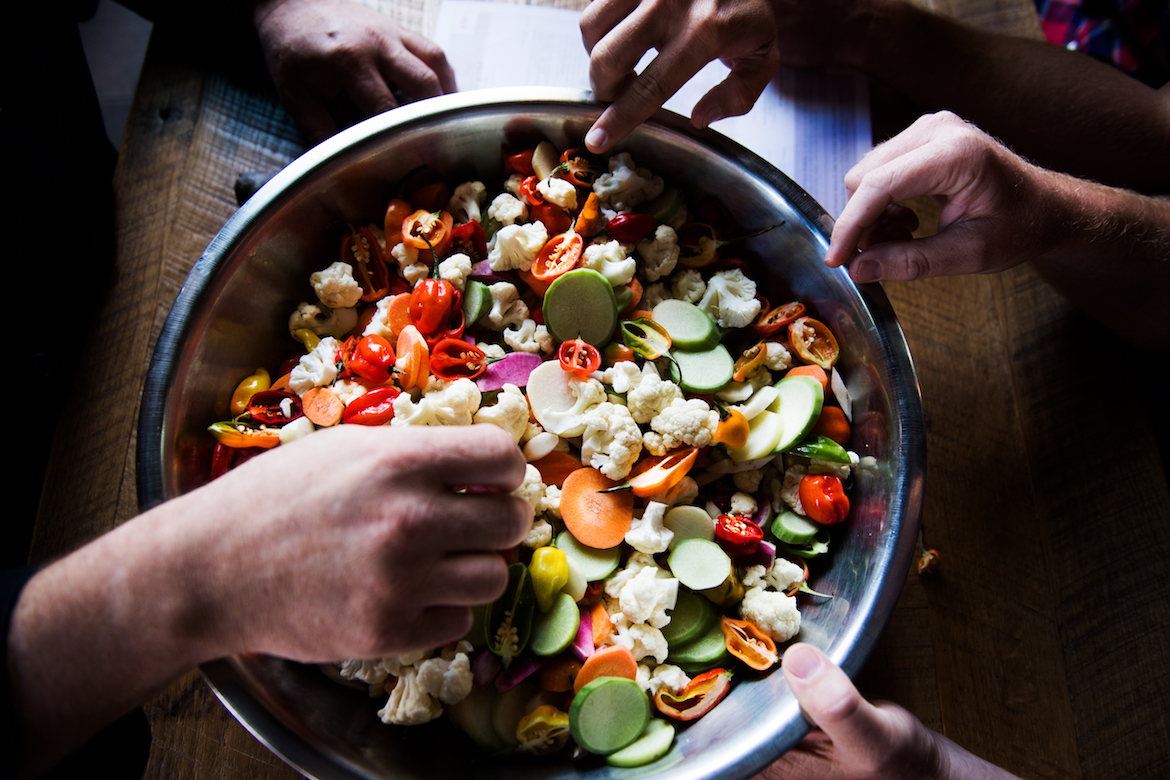 “The way things are right now,” Jesse explains, “chefs have to go out and find these farms. They have to do all the work to make these relationships, email those farmers every week, ask what they have, and they’ve got to write 50 checks a month to 50 different farmers. The people who are doing that and who have been doing that are the reason farm-to-fork exists at all, but that in itself isn’t sustainable.”

What happens to the movement as the very definition of ‘local’ changes—as Charlotte grows, and more farms and more restaurants continue to crop up? In order for farms and restaurants to keep up with the ever-louder demand for stuff raised and grown in our backyard, something has to happen. 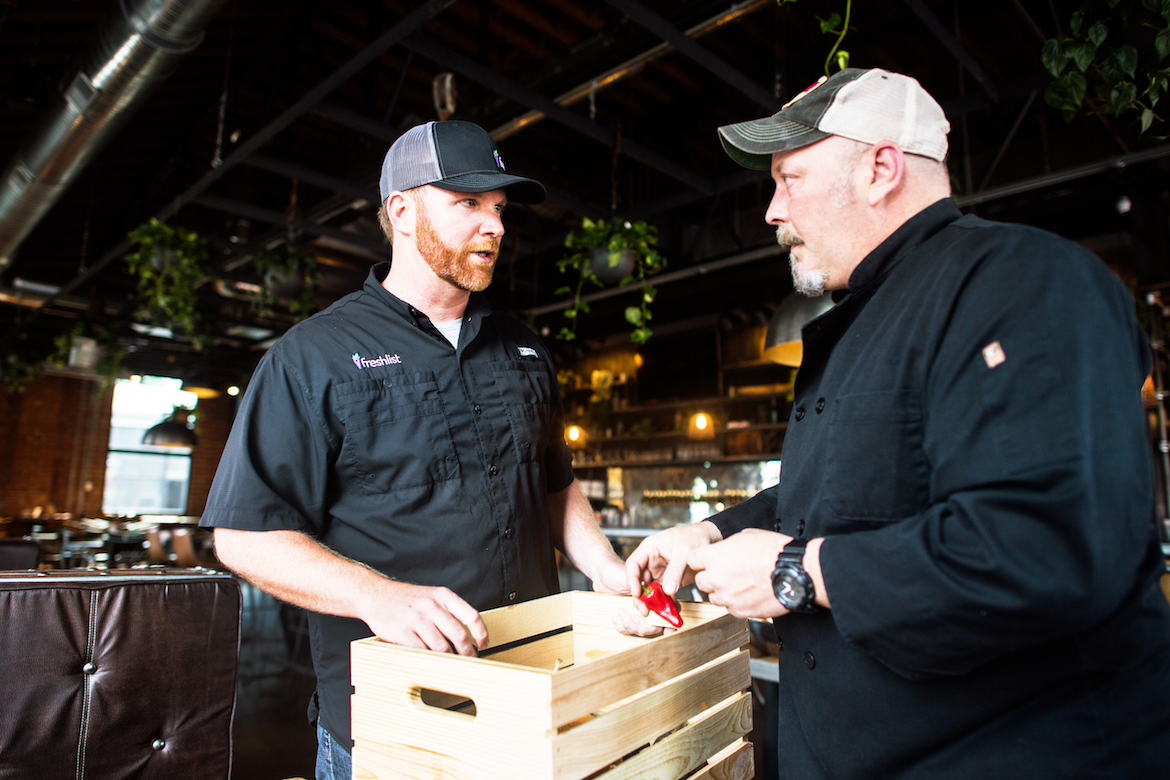 Freshlist may just be the solution, or the start of one, at least. In order to create menus based around what’s available and what’s abundant, chefs have to keep in constant contact with farms…but what if they could check, at-a-glance, exactly what’s available in the whole region? Jesse and Brad have built an online platform allowing chefs to place orders with a wide array of local farms. Freshlist isn’t just designed to show chefs what they can order on a day-to-day basis, though. It also helps them get it. Freshlist delivers, and not just wholesale: The average Charlottean can place grocery orders, a facet of the business that specifically targets the local consumer. This is the unspoken third goal of the company: to help consumers reconnect with their food. Freshlist is meant to rework Charlotte’s food system, but Jesse’s hope is that it will also help to build a better food community.

“When people care about their food,” he says, “they end up supporting the producers and providers of their food.”

That investment starts with the chef, of course, because their kitchens drive a community’s interest in food—which is why Freshlist will implement try-this-at-home recipes from local chefs in their delivery services—but it ends with the farmer.

“If there’s one thing I’ve learned throughout this process, it’s how ridiculously hard it is to be a farmer today,” Jesse says. “These people who want to spend their lives farming, who are passionate about it…they shouldn’t be struggling.” 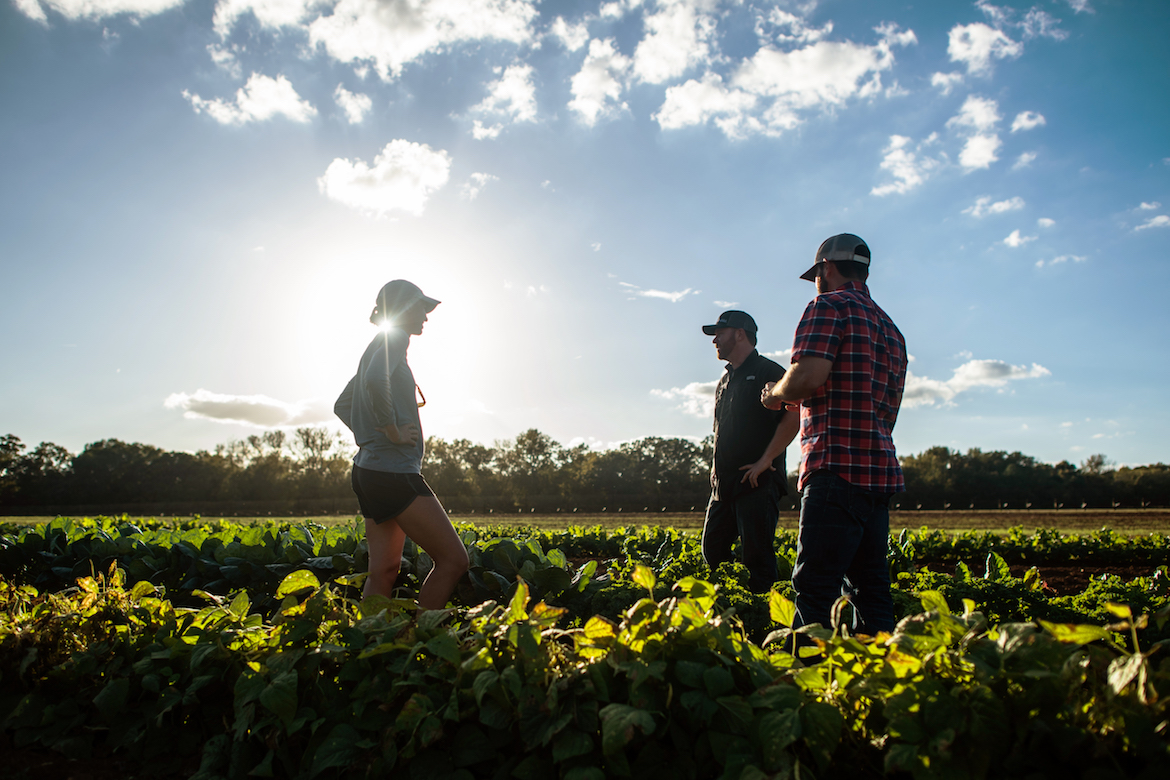 These people who want to spend their lives farming, who are passionate about it…they shouldn’t be struggling.

Making farm-to-fork sustainable makes it more widespread. As more influencers (chefs and mixologists and the like) embrace it, communities begin to give their food a second thought. Give those communities access to that food outside of the fleeting, one-day-a-week and for-a-few-hours-only retail experience that is the farmer’s market. And suddenly, the region’s whole farming enterprise is on its way to becoming a more sustainable, viable career. That notion may just comprise the heart of what Freshlist is: All this really should be easier for everyone involved. Jesse wants to help the movement, but perhaps most importantly, he really cares about the people on the farm and the people loading the forks.

“Freshlist isn’t just helping chefs find local produce,” Jesse insists. “It’s not just helping consumers connect with their food. It’s more broad than that. There was this food system that used to exist, in which everybody knew where their food came from, if they didn’t grow it on their own. That’s all gone, and we’ve sort of moved away from it. People are starting to turn back to that way of eating, but the infrastructure is gone. The whole system isn’t designed to accommodate small and local anymore.”

When people care about their food, they end up supporting the producers and providers of their food.

Jesse’s company is an ambitious attempt to create a new infrastructure. Freshlist is, for all intents and purposes, just one of many steps toward cultivation of a better food system. It’s a problem Jesse says he’s perfectly happy trying to solve—and he’s refocused his life around the effort—but this is a big fix. Charlotte is just one city, and we’ve an entire country in need of a better food system. Jesse’s partners are busy laying similar groundwork in their native Dallas-Fort Worth area, but this is just a start. Freshlist could expand to other places, but that will mean earning the trust of local chefs and farmers all over the place, all over again—a feat that, even in a late-blooming farm-to-fork city like Charlotte, has taken Jesse years to accomplish. And there’s still plenty of work to be done here.

But Jesse’s not daunted by the magnitude of the undertaking. In fact, he’s just crazy enough to inspired by it.

“I don’t think we’ll fix our food system while I’m living,” he says carefully, “but I’d like to be able to look back in my 60s or 70s and feel that I affected it in some way. I’d like to leave it better than I found it. I’ve read somewhere that, ‘If your life’s work can be accomplished in your lifetime, you’re not thinking big enough.’”

There are approximately 2.2 million farms in the United States. Freshlist is thinking big. 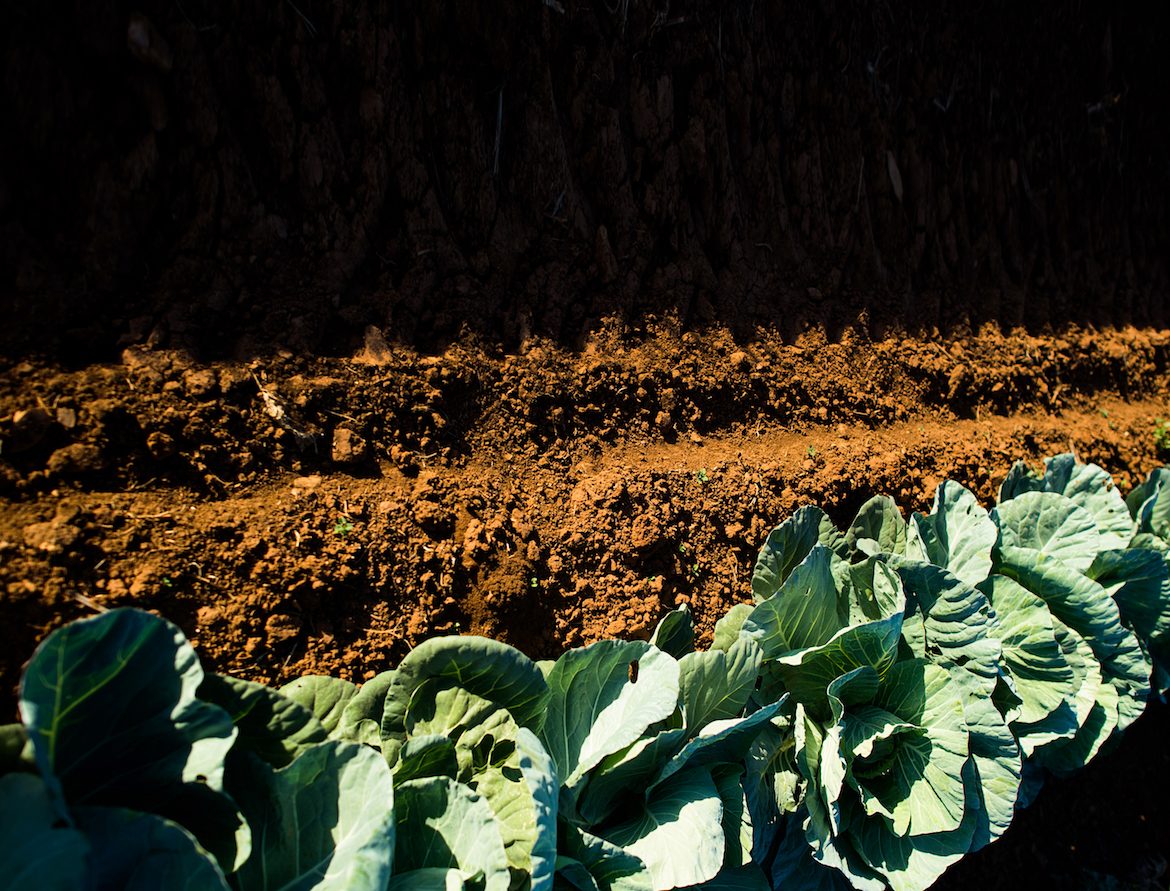