It’s too early. Early enough, actually, that I can’t remember who insisted on the pre-dawn meeting time for our foraging trip—me, or Chef Clark Barlowe. The Heirloom Restaurant chef and locavore extraordinaire has come prepared: He’s wearing a Carhartt jacket and toting a good-sized woven basket. We’re not far from his Huntersville home, out in the woods on a morning colder than any spring morning has any right to be.

We pass some violet greens, and Clark describes how similar in taste they are to okra. There’s still minimal light. We tiptoe carefully around some pretty white wildflowers called bloodroot, a relatively rare flowering herb that can be used to treat various skin problems and throat conditions. Just as I’m realizing how little I actually notice the many thousands of plant species in the Carolina woods I’ve known all my life, Clark stops. He’s pointing at something I would’ve strolled right past. 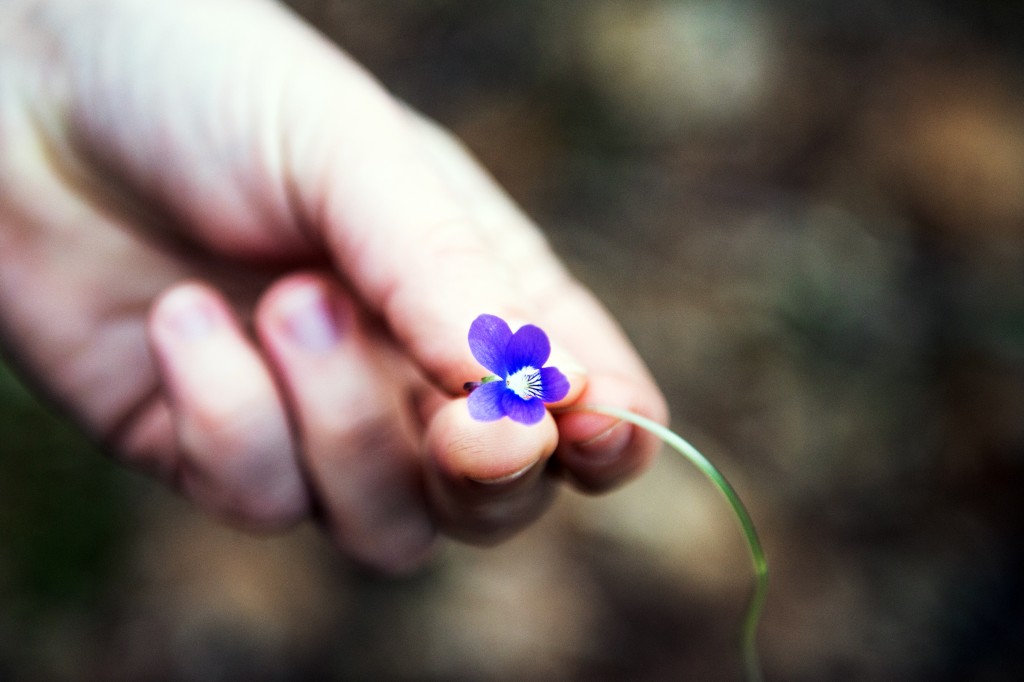 “These are the first few fiddleheads of the season,” Clark says, kneeling excitedly by what I learn is a young bracken fern. Those could actually be the second batch of fiddleheads of the season. I happen to be standing on what might be the first, but I’m not going to tell Clark. I guess my forager’s eye still needs some training. I’m intrigued: How do we not see this stuff? Is a career in botany calling me? Even Clark’s no scientist, though.

“We just have to learn,” Clark says. “We study what’s edible and learn which things identify them. And then we study what tastes good.”

Clark Barlowe is famous around these parts for his obsessive habit of sourcing his food exclusively from North Carolina, but he’s also earned a reputation as Charlotte’s chef forager. Foraging—combing the wild for edibles for cooking and garnishing—isn’t just this chef’s kitschy hobby. For Clark Barlowe, it’s in the job description, and it may be in his Appalachian-born nature.

“When I was a kid,” Clark recalls, “I’d go with my grandfather all the time, but he never really called it foraging. We’d go fishing, and then we’d start walking in the woods. His thing was always ginseng—which is funny, because that stuff is a cautionary tale for foragers now. Because it was trendy, we foraged ginseng until it was gone. There’s almost no ginseng in Appalachia now.” 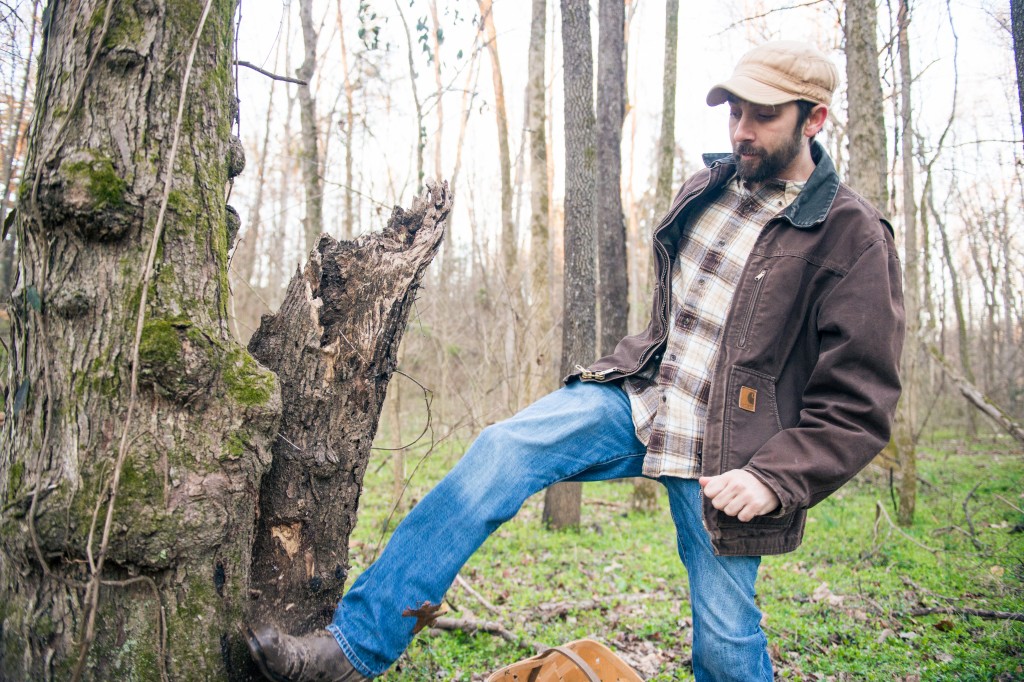 Trend, it seems, is a powerful thing. So today, we’re gathering only about 60 percent of what we find. I doubt it’d make too much of a difference, though. He gathers the “easy stuff” every year—morels (abundant little black mushrooms that are extraordinarily easy to identify), ramps (wild leeks), and fiddleheads (the furled fronds of a young fern). But Clark doesn’t do anything to death, and his menu is constantly toying with new concepts. Recently, Clark’s been playing off and on with sycamore sap and dried leaves, testing what kinds of jellies and braisings the forest has to offer. And judging by the way he’s eyeing our take of moss (scalped from an unsuspecting rock moments ago), he’ll probably be doing something else unheard of by the end of the year.

I don’t always come out of the woods with something in hand, and that’s fine. That’s how foraging goes. You’re looking for something. That doesn’t mean you always find it. 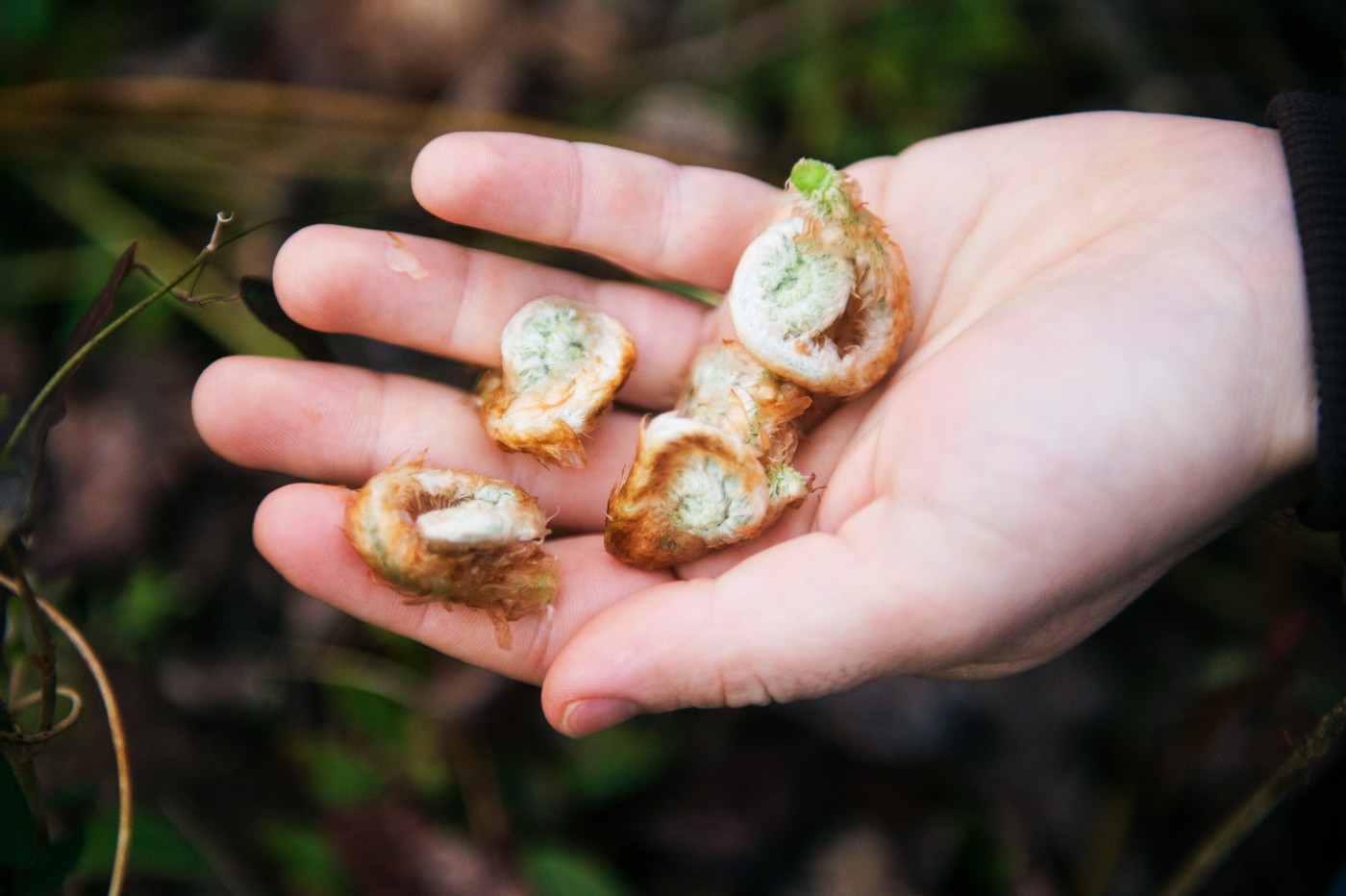 We’ve reached the edge of the woods now, and we’ve found exactly what we were looking for: mostly nothing. Clark has found a few things that he wasn’t seeking, but we came out today to investigate whether it was too early in the season for mushrooms. And, well, it’s too early for mushrooms. I’m a little disappointed, but Clark isn’t.

“I don’t always come out of the woods with something in hand,” Clark laughs. “And that’s fine. That’s how foraging goes. You’re looking for something. That doesn’t mean you always find it.”

We’re now in a small clearing where, in spite of the cold, greenery is taking over. Warmth is returning to our hands, empty though they may be. The sun is grinning through the trees, and the woods have what Clark calls “the look of a fairytale” about them. Who needs mushrooms?