Stewards of Southern Food, Charlottes own Michael and Geena Woodard, have created a delicious spice blend, Carolina Table Salt, thats good on most anything.

Michael Woodard started cooking with his mother at the ripe old age of five. I was always in the kitchen with her. I was one of those kids who loved food and was always concerned with where my next meal was coming from. That flame for food has never burnt out. Instead, it helps define Woodard.  At 19, Woodard started working in the restaurant industry. From humble beginnings flipping burgers to college – where, instead of getting a master’s degree he was mastering the charcoal grill – to his current endeavor, Carolina Table Salt, nearly every part of his life has been impacted by the culinary world.

Woodard’s epicurean influences are many. It all started with his mom, his greatest inspiration, but he also learned a lot from a friend named Ruby who helped him put the soul into cooking. Ruby weighed north of 300 lbs., recalls a smiling Woodard.  She could sing Amazing Grace like you’ve never heard it, and her fried chicken made Price’s Chicken Coop taste like scraps…I used to love watching her cook. His experience working at a fondue restaurant expanded his horizons. While running the kitchen he became a diligent pupil. The chef was fantastic. I was able to learn a lot and move outside my comfort zone of simple southern eating. Then there was his wife, Geena. “I married her for her shrimp and grits,” says Woodard.

That’s where this adventure all began. Their “whirlwind romance” fittingly started at a pig pickin’ in 2010 where Woodard’s eastern North Carolina barbecue was introduced to Geena’s low country shrimp and grits. It was a match made in heaven; destiny some might say. Head over heels for each other, the two were quickly engaged. With very little money to their name they were tasked with doing a wedding on the cheap and that meant they had to be creative with their wedding favors. Together, embracing their love for food, they came up with a simple, affordable gift for all of their wedding guests. The idea: bottle a rub for everyone. 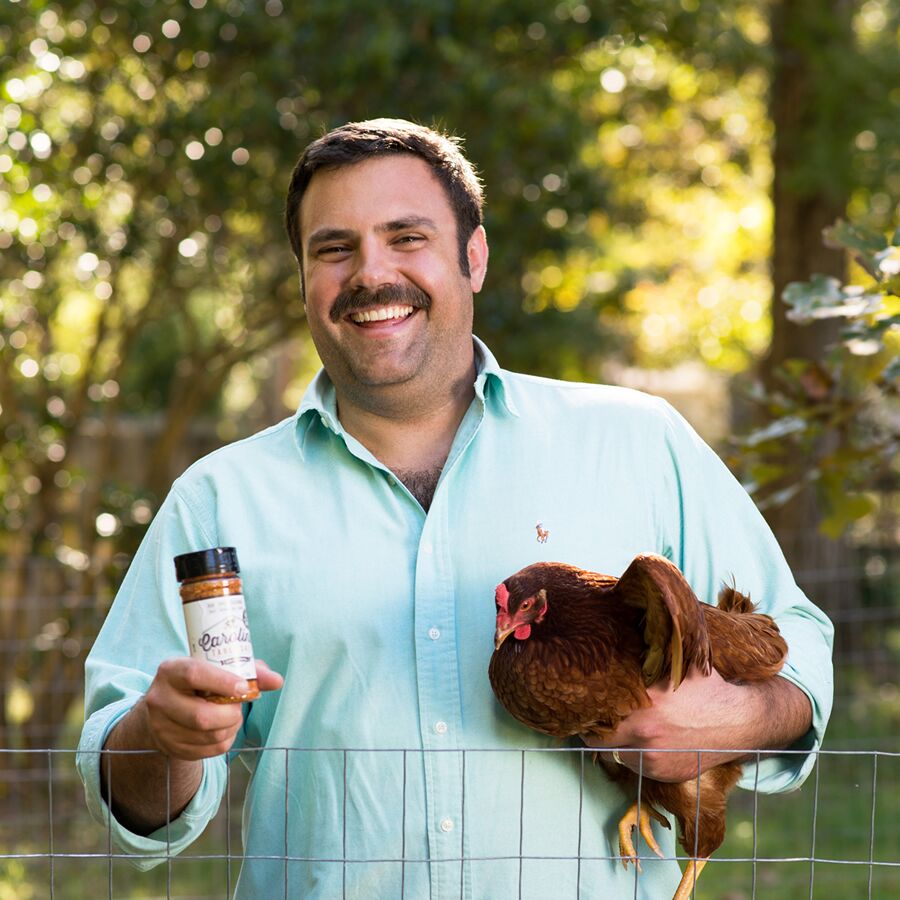 Geena tweaked the barbecue rub recipe Woodard created while in college. What she came up with was the perfect combination of both [of their] upbringings in one bottle.” After receiving the wedding favors, several guests requested to take extra seasoning packets home with them. Then, just a couple weeks later, a friend and firefighter from Pensacola, Florida, placed an order for his entire firehouse, requesting 50 bottles. Once they met that order they instantly received another order for an additional 50 bottles. “It took fire!” They started to realize the true potential of their wedding rub and after talking at length and taking a closer look at the reality of starting a business, Woodard and his wife decided to take the plunge. Carolina Table Salt was born.

First, they needed to find investors to produce the blend on a larger scale. This turned out to be far easier than they ever could’ve imagined. Maybe it was because of how good their product was, or maybe they just had really good friends that truly believed in them. Either way, they were funded. A friend who had the capital, and another who attended college with Woodard provided the initial infusion. The two are now the main sounding board for advice and direction, a great addition to the team.

Second, they needed to get their product out there. They figured the easiest way for the public to become familiar with Carolina Table Salt was to simply taste it on delicious food. So, Woodard did what any self-respecting southern swine enthusiast trying to sling his own rub would do, he purchased his very own smoker and trailer. The massive cooker features a smoker, oyster roaster, and grill perfect for any catering event. On any given weekend you can find Woodard somewhere around the Queen City cooking up his favorite fare and peddling his tasty table salt. Woodard considers their catering Country Chic – pig pickin’s, oyster roasts, low country boils, shrimp and grits; food that is represented by the South.”

The catering has worked. Tasting the delicious flavors has “opened people’s eyes to the possibility of [our product] becoming more of an everyday type of seasoning. It’s combination of salt, brown sugar, super secret ingredients, and a pinch of love make the mixture versatile. It is a rub, a base, a crust, a searing, a topping, or a garnish.  Their slogan definitely rings true: Carolina Table Salt “is good on most anything.” 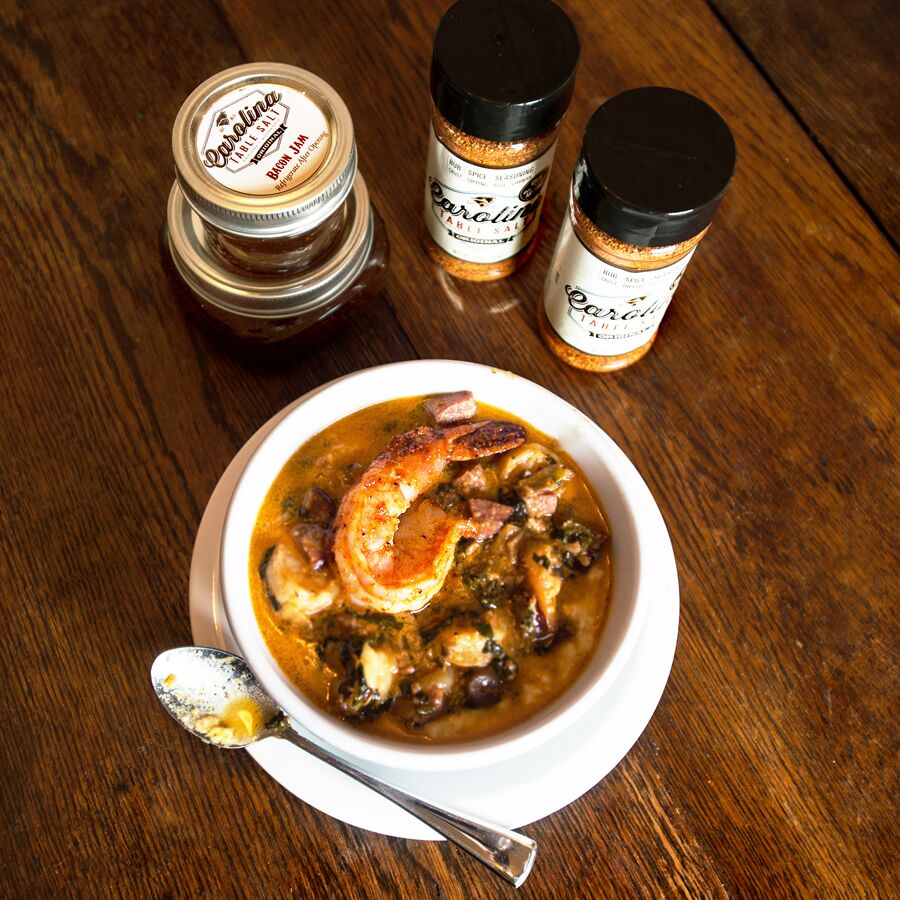 Currently, Carolina Table Salt is available for purchase at the Fresh Market, Reids Fine Foods, The Butcher’s Market, the Sporting Gent on Selwyn Avenue, and Charlotte Grill Company. With hopes of expanding into other stores, markets, specialty foods and perhaps a brick and mortar environment, the Woodards are experimenting with a couple of additional seasonings, sauces, bacon jam, take-n-bake tomato pies, and other tasty specialty items.

All of these new goodies are planned and prepared together as a family in their humble country kitchen. Always there to help in product development – their tasting panel if you will – is their daughter Harper Leigh, and their pup, Captain Willis. The Woodards recently welcomed their second daughter and future tastemaker, Harlan Larue, to the world. With an expanding family and business, things tend to be both fun and challenging. Geena bears the bigger burden as she raises the kids, helps out with Carolina Table Salt, ships packages, and absorbs the majority of responsibility of our home while I’m juggling work and the business, making for long hours away from home, says Woodard. The long hours and hard work are paying off. The product is delicious, the brand is strong, and their mission is authentic: Carolina Table Salt is the steward of southern culture lived through food. Woodard sums it up, “We live our life through a southern lens, and we want to spread the warmth, the hospitality, and the community that has held the south together for so long.

In a very short amount of time, Michael and Geena Woodard have watched their product evolve. As I’m sure you know, entrepreneurship is like taking a beautiful ship across the ocean for the first time, says Woodard. You’ve got tons of pride and passion mixed with excitement and a little fear. Some days seas are calm, and the sailing is smooth. The next day you’re getting tossed around in a storm praying you make it out alive, but the beauty is waking up every day wanting more. This year has been challenging and stressful, but also one of the most exciting of our lives. For more information or to purchase your very own bottle visit them online at www.carolinatablesalt.com. 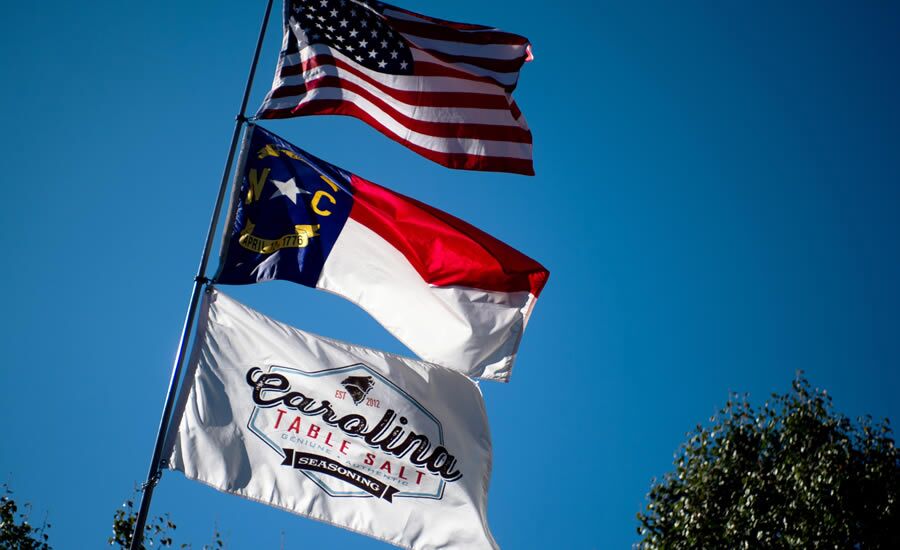