Bruce Moffett’s restaurant Stagioni is located in a gorgeous Eastover home with an unbelievable history and serves up some of the finest Italian food in the city.

Mrs. Blanche Reynolds Gormajenko, a Durham, North Carolina native, was well traveled, especially in Europe, and in particular, Italy. She spoke three languages fluently:  Italian, French, and English, and was nearly fluent in a fourth. She spent most of her days in bed with a book in hand, soaking up the arts. She was versed in politics, history, and culture and often took pleasure in discussing these topics during many of her elaborate and often unorthodox social gatherings.  However, she was not well versed in the customs of early 20th century southern Charlotte and had absolutely no desire to be.

You see, most gentile women of her era were different. Most were  proper, more conservative. Blanche was not like most. She didnt wear white gloves, nor did she accept calling cards (a practice for most women of the day), or entertain with tea.
Her eclectic, worldly ways were manifested by the house she built with her late husband, Mr. William Reynolds of Southern Cotton Oil Co. In a time where revival style homes were popular in the global capitals of the world, Charlotte did not experiment with them. Instead the Queens city grasped tightly to its traditional style: bungalows and Georgian architecture. Blanche had other ideas of building a grand Italian villa right in the heart of Charlotte.

According to Rosalie Reynolds, Blanches granddaughter, She [Blanche] loved Italy. She went there every year with her sister and she told me, and I remember very distinctly, she said I remember where I lived in Italy in my past life and when I went back one year I found the town, found the villa, and I came home and I said to William Lawrence Bottomley, the architect, this is what I want, and he built it.

The Reynolds-Gourmajenko House, located on Providence Road, mirrored a Mediterranean movie set. Antique tiles graced the roof, stuccoed walls housed its glory, and archways and arched windows were abundant. On the inside, fine art, mostly European, some pieces dating back to before Columbus discovered America, and lots and lots of angels, adorned the interior, while ornate furniture completed the home. The estate featured tall walls and a strong gate, perfect for protecting Blanche from the rampant conventionalism outside.

When her first husband, Mr. William Reynolds of Southern Cotton Oil Co. passed away suddenly, Blanche inherited the large estate. The construction was completed in the year of his death – 1928. During her mourning she traveled extensively. On one of her trips to Europe, at a small restaurant in Italy, she met eyes with Mr. Alexis Gourmajenko,  and according to Rosalie, that was it.  Gourmajenko, a Russian emigre who served for the Czar and fled Russia when the Czar was overthrown, left Europe with only his icons and came with Blanche to Charlotte. The two were wed and lived together in the glorious Tuscan villa.

For many Charlotteans, the villa was shrouded in mystery and mystique, and for good reason. Blanche had a secluded room for seances where she would communicate with spirits. She had a bookshelf right out of a movie, that opened at the flick of a book, hiding her personal speakeasy. She kept the gates closed at all times and behind them, like a Charlotte Gatsby, she would host secret, lavish dinner and pool parties for only a lucky few, many of them accompanied with a shock factor. According to Rosalie, The story I love that my mother tells – my grandmother had a literary club and she invited them over one day. They sat in chairs outside around the pool in the backyard and she [Blanche] said to them now, Ive invited this young artist who is also a poet down from New York to read to you his poetry. All of them were sitting there so proper and they heard this voice from above and they looked up and the poet was reading poetry to them stark naked from the branch of a tree. Of course the ladies were shocked and they never forgot it. They loved every minute of it. I think she put him up to it. She did not go along with all the Charlotte conventions of the time and as a result everyone wanted to be invited to her house.

Blanche Reynolds Gormajenko and her extraordinary life are memorialized in that villa. Her story is one of legend and lore. Her eccentric lifestyle in an age of conservatism still brings a sense of pride to those who knew her, including her granddaughter, Rosalie.  And her spirit lives on (literally, it is said that Mrs. Blanche, even in death, is known to make her presence felt at the estate on Providence Road).

Over a decade ago, Bruce Moffett was working in Boston  when he decided to come visit his son. I figured it was just going to be a matter of time before he wanted me out of his life, said Moffett, so I came down here to visit and on a whim I went to apply for a job. The first job I applied for, the lady offered to sell me her restaurant, and I said …Uh…okay. This restaurant is now known as Barringtons. To get it started, Moffett invested his entire life savings and maxed out every one of his credit cards, all the while crossing his fingers. The first two months were just brutal. Then we got four out of four stars in the Observer, said Moffett, and the rest is history. Barringtons is now one of the most acclaimed restaurants in the city and Moffett recently opened his third restaurant, the highly anticipated Stagioni.

The idea of Stagioni, which means seasons in Italian, all started when one of Moffetts customers suggested that Moffett look at the space at The Villa on Providence Road. When I walked in, I said, well, I guess were doing Italian, said Moffett, I just loved the space. I thought that there wasnt a lot in this neighborhood and the space itself was underutilized.
Moffett knew nothing about the history of the building or its previous residents when he first started designing the restaurant. All he knew was that people would be at home dining here. Its a building thats unique to Charlotte and [I felt] it could be a different experience. We found out about the history as we went along.

As more and more of Mrs. Blanches story was divulged, Moffett obliged by including much of her story in the design. She [Blanche] was really into angels so weve got our angel wallpaper. The bookshelf is a secret door to our office. The photo on the ceiling is a photo of her sons wedding in France. We just tried to use and mimic a lot of the things in her story and her house, said Moffett. Along with aspects incorporated from Blanches story, the restaurant also features an open kitchen lined with seating so guests can watch the chefs work, community tables for socializing, beautiful sconces that emanate dim but pleasant lighting, and dark, rich wood tones throughout. All of these details come together to accomplish the end goal seamlessly, to whisk guests away to Italy.

The design and build of Stagioni was a long and enduring process. Moffett and his team had to overcome all kinds of new challenges. This was the first restaurant, and quite possibly the last, that Moffett had to build out completely. A heap of mishaps, from construction delays and selecting new designers bogged down progress, but their team persevered. Everybody swears that shes still here. Everything so far has been difficult here. I dont know if its Blanche making it difficult but…said Moffett, when I sit here and calculate how many mistakes I made its pretty daunting. But I like it. And so will the whole of Charlotte.

Stagionis menu is a blend of simple and eccentric Italian, one that even Mrs. Blanche, lover of all things Italian, would approve. According to Moffett, Stagioni is going to focus on Italy, from the feel of the house when you walk in to the food. Were doing classic Italian dishes and reminding people of why they are so good, as well as a modern take on Italian. But  in all honesty were not going that far outside of the box. Italian food is what it is and its just good.

Moffett has placed Chef Larry Schreiber at Stagionis helm. A Moffett loyalist, Schreiber has always been part of the support team, and I consider myself very good at it, but now its my opportunity to shine, said Schreiber. With a strong menu that features in-house handmade breads and doughs as well as fresh local ingredients, Chef Schreiber will certainly get that opportunity.

Stagionis use of local ingredients isnt just rhetoric but it does come with a caveat. According to Moffett, We use New Town Farms, Laughing Owl, Heritage for pork, Charlotte Fish Co. for grouper. Im hoping with this restaurant I can bring in full animals, break them down, and cross-utilize them with all the restaurants. Local tastes a lot better, but one of the things Ive always said, I will go local as much as possible, but if its not good Im not going to use it for the sake of being local. 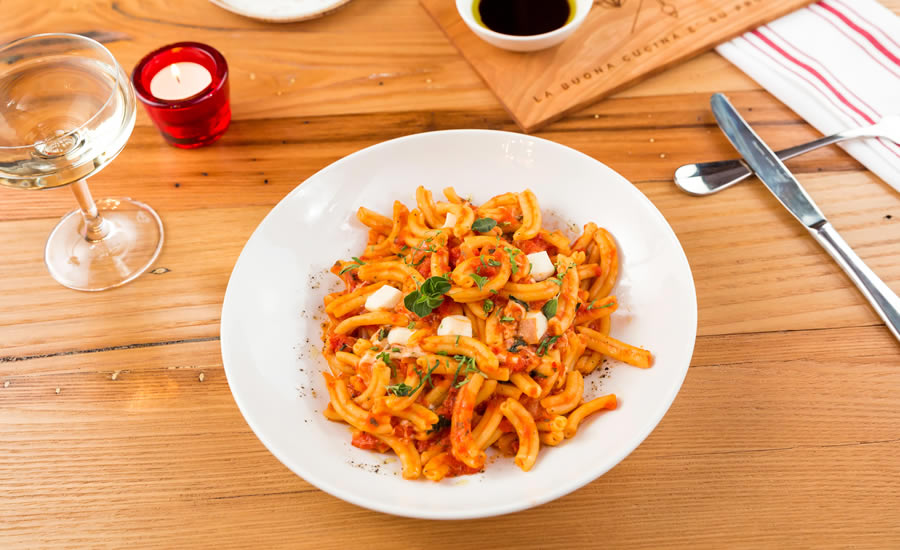 From Veal Saltimbocca to Chicken Cacciatore, Chef Larry Schreibers menu at Stagioni has all the classics and they are executed near to perfection. It also features some interesting new takes like the brussel sprout pizza – a crust crisped in the wood stove and topped with pancetta, parsnip puree, and pecorino. A plethora of small plates are available for those who wish to try a sampling of dishes and share with a group. The  menu also offers charcuterie for the meat and cheese lover, fresh handmade pastas for the traditionalist, and a handful of delectable desserts to end the evening. Stagioni also boasts a speakeasy of its own, a prosperous wine cellar full to the brim with over 100 wines, most from Italy. If you prefer Prosecco just pull up a stool and ask the bartender to pour you a glass from the tap, the only one of its kind in Charlotte.

By paying homage to both good Italian food and the rich history of The Villa it now occupies, Stagioni is sure to be a staple in the community for years to come, and without a doubt, a place that the eccentric entertainer, Blanche, would feel right at home in.

For more information, to view the menu, or to make a reservation visit www.stagioniclt.com.