The sport of fox hunting began in 1534 in Norfolk, England when farmers trying to rid themselves of the pesky, yet sly fox took to horse and chased down their quarry with a pack of hounds. During the next two centuries the sport grew in popularity amongst the aristocrats and the well-to-do, many of whom are responsible for implementing the impressive practices, designations, and attire on display today. In America, during the middle of the seventeenth century, the country experienced an influx of the European red fox. To deal with the increase in the population, an Englishman named Robert Brooke held the first traditional-style meet on colonial soil in Maryland. Since Brookes first hunt by the Chesapeake nearly four hundred years ago, the sport has grown, flourished, and reinvented inself in our country. 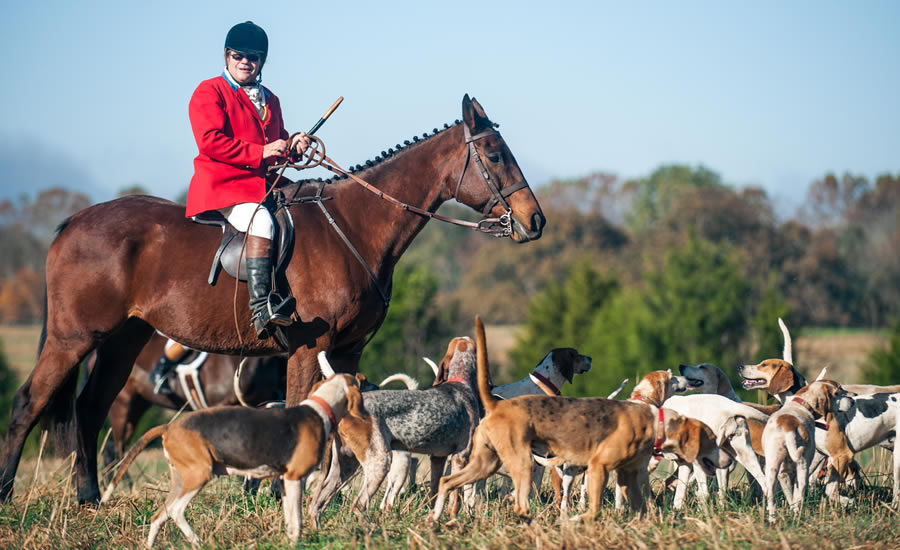 Controversy over the sport and questions of cruelty became a factor in England, Scotland, Germany and others, ultimately dissolving the sport in those countries. However, here in America, the sport endures and the traditions that accompany it are followed with fervor. The reason for tolerance in our country towards fox hunting is simple: here it is more fox chasing than fox hunting. Very few fox hunts end with a kill to the the quarry. This is for several reasons. One, foxes, like the old adage states, are very sly and a pack is rarely ever lucky enough to even see one. Two: once a fox has gone to ground (when the animal hides in a hole), the pursuit stops. Never, ever is catching a fox the main goal of a modern day fox hunt. Instead it is all about the gathering of friends, the horseriding, the eating and drinking, and the preserving of a centuries-old legacy. 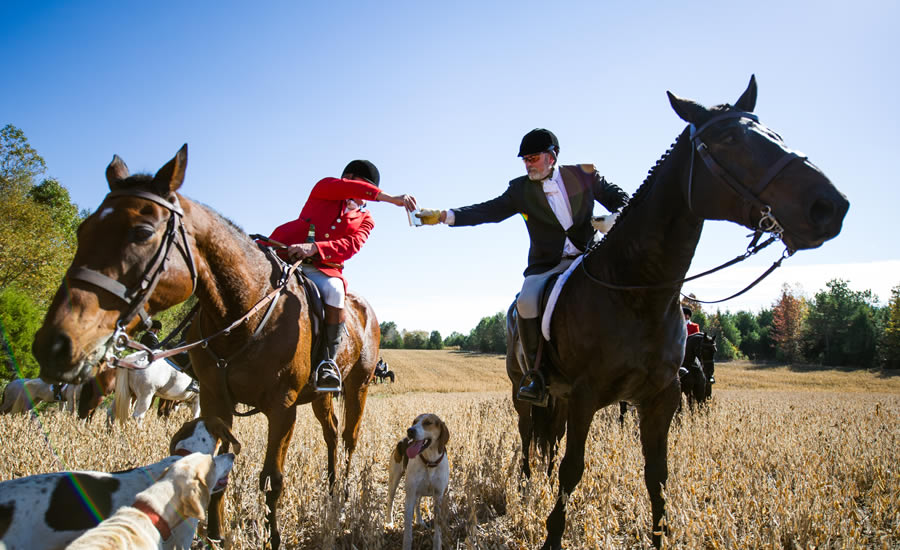 On a perfect November morning, as the fog rose from the dewy, cold grass, nearly fifty riders prepped their horses for the opening meet at Wilsons farm, south of Charlotte. As we arrived, we were greeted by a smiling, Master of the Hunt, Jeanine Devaney of Mecklenburg Hounds. In her hand, a small flask of port  liquid courage  that she sipped. After offering us some of her courage, she chatted for a bit about the going-ons of the day and then recommended we walk around and take in the scene. It was quite surreal, almost as if we had traveled back in time. The surrounding, expansive land was stunning. Rolling fields and bordering forests were the setting for the hunt. The leaves, half fallen, half still hanging on for their lives, colored in bright reds, auburns, and garnets, were the perfect backdrop. There were horse trailers and beautiful, strong horses of all sizes and colors, riders dressed to the nines in red (master of the hunt, the hunstman, and whippers) and navy blazers, breeches, tall English riding boots,and accessories to boot. And there were smiles. 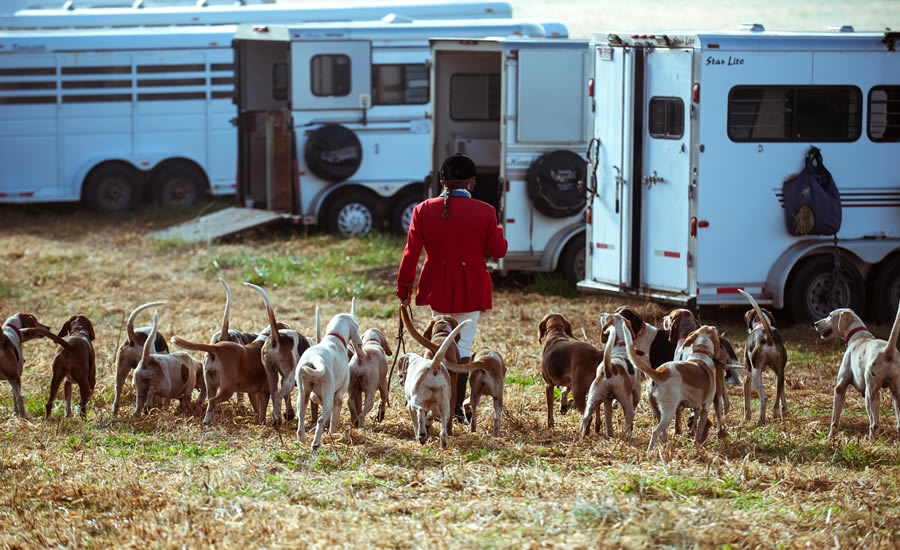 We walked around for about an hour watching the riders prepare, watching them warm up their horses, cantering with them, and simply put, the animals and their riders are equally impressive. And theyve got to be. Riding in a hunt is arduous. The field and forest present many obstacles that challenge the horse and its rider. Noone knows this more than the Hunstman, Jay Thomas, of Mecklenburg Hounds who introduced himself and then began to explain the very intricacies of the forthcoming hunt.
The descriptions and terms that he used sounded a little like a foreign language, but I got the gist…for the most part. The Huntsman directs the hounds and communicates to them with commands and a horn. As they get on a scent, the horse and riders follow. Whips, or assistants to the Huntsman, flank the group of riders and dogs to prevent any hounds from straying and to keep the pack together. Then, if everything goes perfectly; if the pack gets on the right scent, the horses and hounds work together harmoniously, and Lady Luck shows her pretty face, the group just might flush out a fox. If this does occur, which very rarely happens, when the quarry or fox is seen the riders yell the famous phrase, Tally-ho.

After hearing his explanation, we were ready to experience it for ourselves. The group of riders gathered in a circle and welcomed each other formally, chatted for awhile and then announced the releasing of the hounds. Jay, the Huntsman and twenty-some-odd hounds sprung from their kennels and trotted towards the circle of horses. Then a pastor, dressed in a bright white and red garb, proceeded to bless the hounds and pray for a successful hunt. Although only a couple minutes long, the blessing was a sight to behold. Anxious dogs ready to work, intertwined with horses ready to run, and men and women ready to lead. 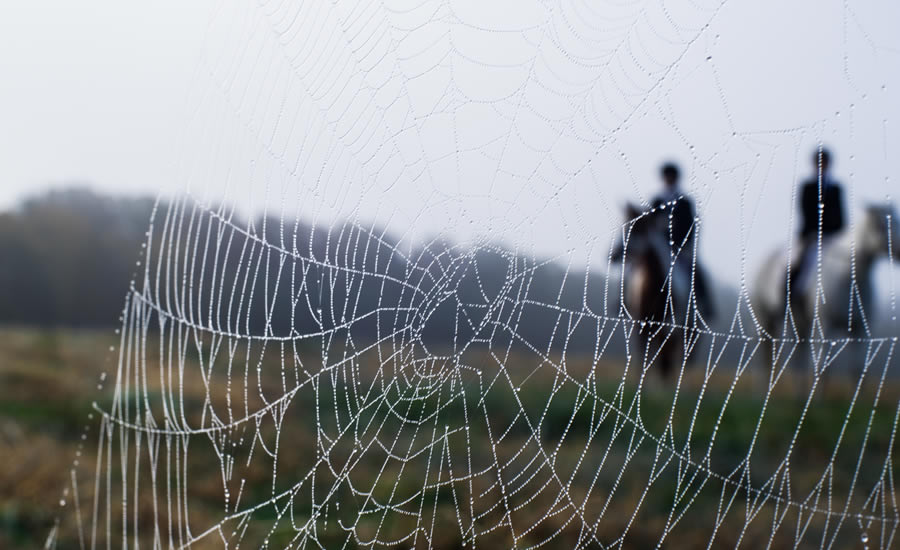 We hopped on the Tally-ho wagon  the transportation for spectatiors (a tractor pulling a long trailer with built-in seats used to follow the horses and hounds and keep up with all the action) with around twenty others ready to take in this beautiful day. Then we were off. At a casual pace, we attempted to stick with the pack of hounds as they followed their noses. We passed through giant mud puddles, under low-hanging branches, over fields of soy and sorghum, all the while watching and waiting, hoping just to see the cunning, wily fox. Occasionally, the Huntsmans horn would sound and the pack would appear, headed in another direction on a seemingly new scent. Several times the hounds  confused – simply stopped, giving the horses a chance to rest and  the riders a chance to down some more courage and simply joke around and laugh. Several hours went by quickly  maybe it was because we were soaking up the warm November sun or maybe it was how much I enjoyed watching the dogs work  and the horses gallop  either way the hunt came to an end. And, like most hunts and to absolutely no ones surprise, no fox was had.

After the hunt, the riders attended a traditional Hunt Breakfast where food and drink abound. It  is full of fellowship, great conversation, and intermittent chatter on how the hunt went. The fare is great as is the company. And thats the tradition that Mecklenburg Hounds and fox hunters throughout our state and country are preserving: a fine tradition, not one of brutality, but one of camaraderie, one of stewardship for the land and its many gifts. 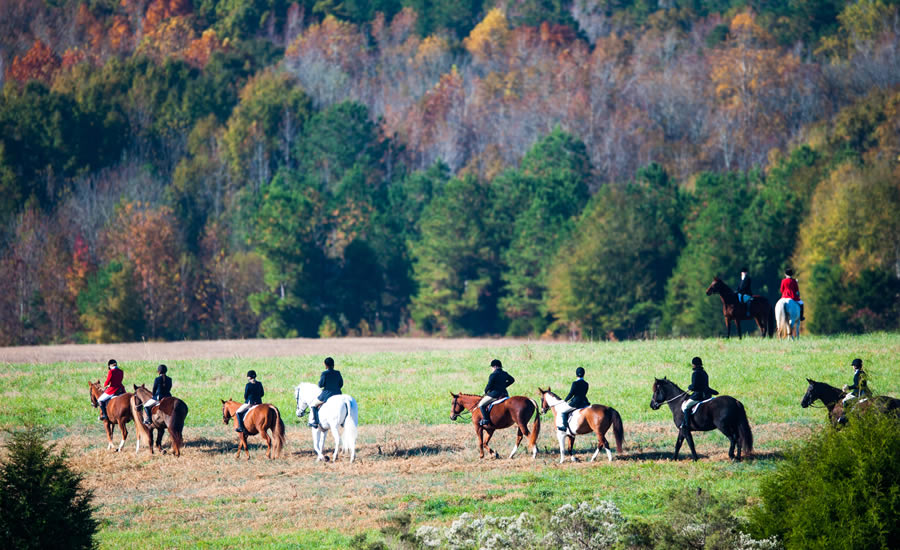