It’s a rainy, gray November day when we walk in to Northwest School of the Arts to meet with Corey Mitchell. Its Charlotte’s only arts-education magnet secondary school, a collegiate-looking brick building on Beatties Ford Road. The walls of the hallways are covered in large murals and kids stream past in a scene reminiscent of middle and high-schoolers everywhere: laughing, shouting, high-fiving, putting their heads together and whispering.

Each of the 984 students at Northwest School of the Arts, 6th through 12th graders, are given a rigorous academic program coupled with the opportunity to focus on instrumental and vocal music, piano, dance, theater, costume design and visual art.

The carefully laid scaffolding behind this mold-breaking, boundary-pushing school is the talented network of teachers and staff. And so we have come to speak with Corey Mitchell, a theater teacher at Northwest for 15 years, who, in 2015, became the first person to ever receive the newest category of Tony Award for his Excellence in Theatre Education.

The Tony’s, shorthand for the Antoinette Perry Awards for Excellence in Theatre, recognize the most prestigious achievements in live Broadway theatre in a star-studded ceremony held annually in New York City. Mitchell was selected out of more than 7,700 national submissions, and nominated by Charlotte-based GreyHawk Films, a former student named James Kennedy and the school’s Theatre Arts Guild.

“That weekend of the Tony’s really solidified and helped to articulate [to me] the value of teachers,” Mitchell says. “I collected and heard a lot of stories. To receive that much love and to be able to get into those conversations… it was really quite stunning. It felt like I had won the lottery.”

Midway through our interview with Mitchell – a smiling, bespectacled man with a quick laugh that can equally as quickly turn stone-serious about the issues that matter to him most – yelling erupts in the hallway. The pitch and tone of two young men’s voices stands out from the steady hum of adolescent noise. There is real vehemence behind the words they are hurling back and forth, and for a moment the only logical thought is that a fight is breaking out. Without missing a beat, or even seeing the two young people in question, Mitchell assures us, “Oh, they’re just rehearsing a scene.”

He pauses, calls the boys, and they both tumble into the room, laughing and curious. He asks them what play they are rehearsing and they tell us they are just improv-ing, putting into action an “emotional energy exercise.”

“So you’re not fighting?” Mitchell asks with a wink in his voice, and the boys reply, incredulous, “what, of course not!” They laugh, spill back out into the hall and go on their way. Once they’re gone Mitchell rattles off their names, how they ended up at Northwest, their academic interests.

“Art is not cheap,” Mitchell says, “but it is of tremendous value.”

And so it goes at Northwest School of the Arts: the students are as immersed in all the highs and lows of secondary schools everywhere as they are deeply dedicated to their various art forms and passions. The teachers are their guiding force, staunchly engaged in the students’ academic and personal lives.

Mitchell, born in Baltimore, Maryland, grew up in Statesville. His first time on stage was in kindergarten, and from there he was hooked for life, an active participant in chorus, dancing, band, and theater all through his schooling career. Mitchell recalls the early, formative influence his own teachers – in particular, a Mr. Calabrese and Ms. Debbie Miller – had on him, and on his decision to pick up the mantle of education himself. 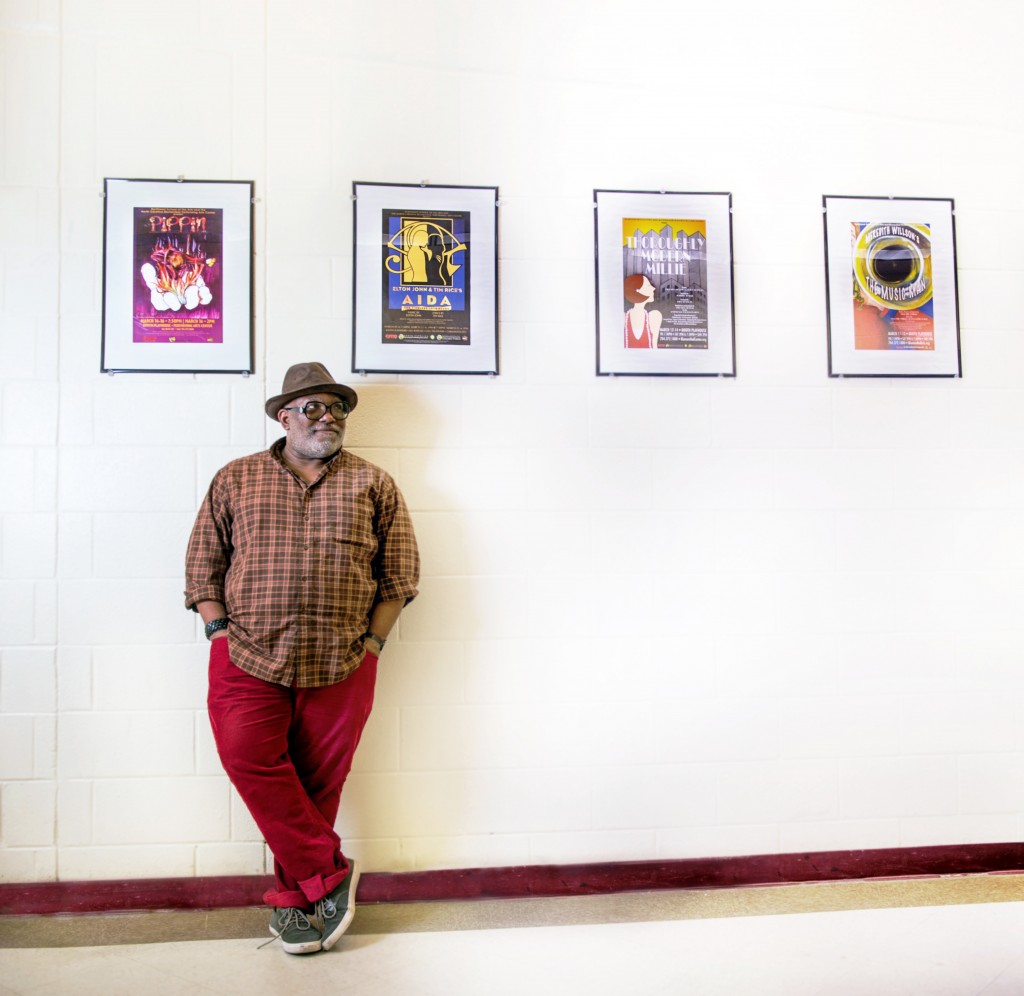 Mitchell attended UNC Wilmington, where he majored in theater and education. Because UNCW didn’t offer a theater education degree, Mitchell graduated with a certification for teaching English.

He spent four or five years in the classroom where he involved himself in theater and directing whenever the opportunity presented. In the year 2000, he began to get the itch for a change. At a Theatre Charlotte awards ceremony for a production he was involved with, Mitchell was approached by a friend who told him Charlotte was in need of some talented theater educators and it wasn’t long before Mitchell was notified of an opening at Northwest. He seized the chance immediately.

“Switching from teaching English to teaching at Northwest was mind-blowing at first and a bit intimidating,” Mitchell recalls. “There’s so many good teachers and such high expectations from the students – Northwest is not like any other high school anywhere. It was the first time I was not working towards a test, but was really trying to help develop young minds. It is really liberating, and you begin to figure out your voice as an educator.”

It’s clear after mere moments that Mitchell is not someone who thinks of his life’s career as ‘work.’ The man really loves theater. He acts, directs, and teaches, and says that each of these three roles feeds and strengthens the others.

Mitchell rattles off the productions that have changed his life, from The Color Purple to Lion King, and says that he has always especially loved the magic of musicals. This past year, he saw his former student, Eva Noblezada, in the UK production of Miss Saigon. The first time he heard her speak on stage, he wept.

Today, he primarily does musical theater at Northwest and is afforded tremendous flexibility in putting on shows that many schools would censor. Some of his greatest joys have come from seeing his students put on these no-holds-barred, true-to-script productions, like Pippen, Colored Girls, and Hair.

“Some of the best things are things that challenge an audience, that help to move the stakes of what is ‘acceptable’ for high school,” he says. “The kids can tell that we are breaking new ground. I still have students contact me and say ‘Colored Girls was one of the most significant things I’ve ever done.’ There is a trust here that we are going to move the audience without alienating the audience, and that’s really of interest to me. Theater can be one of the most powerful voices and most powerful forces in a society.”

This leads Mitchell to another of his driving passions: preserving the arts in education and society at large. With massive governmental defunding of arts programs around the nation over past decades, things like theater and music have been falling by the wayside for students everywhere. Northwest might focus singularly on the arts, but in that the school is the exception to the rule – of which Mitchell is all too aware. He admits a deep concern about the defunding trend, as the arts increasingly become privatized and available only to the wealthier subsets of this country.

“Every kid should have a right to equitable access to the arts,” he stresses.

“Math and science are the intelligence of the society and arts is the conscience of a society – we can’t sustain a highly intelligent people who don’t have a conscience. You lose expression, creativity, the human connection that creates conversation amongst ourselves, and you lose an appreciation for what someone else goes through.

Theater is storytelling and as an actor you’re supposed to get behind the eyes and in the brain of someone else’s experience. If we lose this, then we lose something significant.”

That ‘something significant’ is what drives Mitchell, day in and day out. The Tony’s decision to begin recognizing the educators behind the stars signifies something important – though often overlooked, teachers of all varieties have always been the ones who stitch together the fabric of a culture, passing down knowledge and mentoring young people during their most formative years. To cross paths with a mentor so deeply aware of his own vital role is a once-in-a-lifetime chance.

As joyful as winning the award was, Mitchell is clear: “Even without a Tony, it feels mighty good to do what I do and to be in an environment where I work with people that are so smart and so good at the work that they do. There isn’t another school in Charlotte where I would rather teacher. The arts, the culture, the students, the environment here… it is home.”