Listening to the words of his grandfather, Chris Williams of Williams Knife Company, does what he loves to do for a living – make knives – and he does it at the highest of levels.

Growing up in the Lowcountry was like growing up in a “wonderland,” explains Chris Williams of Williams Knife Co. Originally from Statesville, North Carolina, Williams and his family moved to the coast and now live in James Island, South Carolina. His knife making shop – home to some of the most well-constructed blades money can buy – is located on nearby Johns Island, just miles from the peninsula of Charleston.

As a young boy, Williams became interested in creating. “Watching my grandfather in his shop, whether grinding on a crude blade or putting a new handle on an Old Hickory he just couldn’t part with, fascinated me,” says Williams. As a result, Williams became intrigued with making things. “Being an avid outdoorsman, I naturally gravitated to the main tool used afield…the knife,” explains Williams. As a young child, Williams often would take things apart, see how they worked, and build “stuff to play with.”

Williams used this natural talent, and without attending school for knife making, learned the trade solely by watching his Grandfather. “It was very much trial-and-error, and looking back it was a lot more error. I am no master whatsoever, and I can look back at work from as recent as a few months ago and see that I am continually getting a little bit better with each knife,” he says.
Williams spends a lot of time in his shop but doesn’t consider it a job; he enjoys it far too much. As for the types of knives he creates, Williams crafts a variety, starting with the fillet knife. He “cut his teeth on those and then moved into hunting and skinning knives.” “A real quest of mine,” explains Williams, “was finding a way to design an oyster knife good enough to sustain the rigors of shucking.” His Edisto Oyster Knife was the end result, and through trial-and-error finally reached his high expectations. 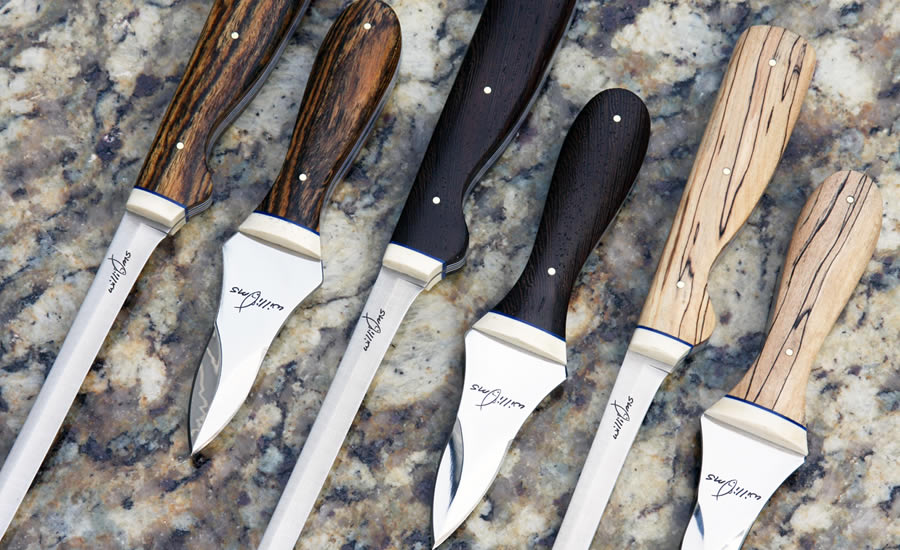 To date, he has ventured into the culinary scene, and although not a cook, Williams considers a “great knife the key to a productive kitchen.” A knife must be “functional first. That’s the hard part. Making them pretty is the easy part,” he says.

Loving what he does, Williams doesn’t classify himself as a craftsman or artist, but as a knifemaker. “I pour tons of time and effort into my knives, the end product showing – I hope – that fact,” says Williams.
There are many components to making knives. From the design to the tool he thinks would be useful to the rigorous steps taken to get to the end product. “Our process is a nice mix of very modern, state-of-the-art machinery with lots of simple hand tools and hand working,” says Williams. “I love consistency, and I feel the process each knife travels through in its life cycle guarantees that [consistency] at its end. Nothing leaves my shop that does not meet every high quality standard that I insist each knife must have.”

The length of time it takes to make a knife depends on the type. Some take as little as two weeks. Others may take over a year, but the average is 30-60 days. The price range for a Williams Knife Co. knife varies too from as little as $250 to upwards of $1000. However, no matter what kind of knife he’s making, Williams executes all of them, from the “small entry level paring knife to the showpiece Damascus steel blades with the same exact attention to detail.” When creating every knife, Williams always imagines making that particular knife for his own personal collection. That keeps the high standard and integrity of all of his blades very much the same. Ironically, Williams owns very few knives. But, the ones he does own, just like the knives he makes for all of his customers, are based on good design, a precise attention to detail, and a 100% ironclad guarantee that the experience will be a good one.
Williams’s knifemaking has received attention from Garden & Gun Magazine where in 2011 his Edisto Oyster Knife won the “Made in the South” Overall Award. His work has been featured in numerous magazines from Esquire to The South and The Local Palate; however, Williams recalls one of his most humbling achievements to date – getting to make knives for his good friend Davis Love III to gift to his team and captains at the 2012 Ryder Cup. “It was both an honor and a great experience. Admiring Davis’ goodwill towards both golf fans and outdoorsmen, and being able to help him with this project was an amazing journey,” says Williams.

All the attention Williams has received for his exceptional skills is wonderful, but at the end of the day Williams knows that in truth it is the customer who affords him the opportunity to “chase this dream” of his. And as he chases this dream, he heeds to his grandfather’s advice, words we should all live by: “If you do what you love, Chris, you will never work a day in your life.” For more information, visit williamsknife.com. Williams Knife Co. is now available in Charlotte, NC at The Sporting Gent on Selwyn Avenue.