The founder of Brave Broth, Joanna Reule, first grew interested in organic bone broth broth when her husband of fifteen years began to practice intermittent fasting, ease inflammation from injuries, and wean himself off of his cholesterol medication. During the process of healing, he indulged in warm mugs of bone broth, a high nutrient soup made from simmering poultry, cow, or fish bones, instead of the more conventional remedies. After experiencing the change in his body first-hand, Joanna picked up her own mug-sipping practice. She replaced her daily caffeine fix with bone broth and quickly noticed a strengthening in her immune system. Her mood and satisfaction generally improved, she ate less at dinner, and slept better. Soon, bone broth hooked her whole family.

Organic bone broth has been around for centuries. However, Joanna began her company with the vision of bringing New York City’s updated hot-by-the-cup broth concept to Charlotte. She knew the extreme health benefits of bone broth would be the perfect addition to the growing health and wellness industry in and around Charlotte. Since many are too busy to slow-cook their own meals to nutritional perfection, the new trend of grabbing a cup of bone broth on-the-go, like a green juice or smoothie bowl, is convenient for locals and exciting to Joanna. 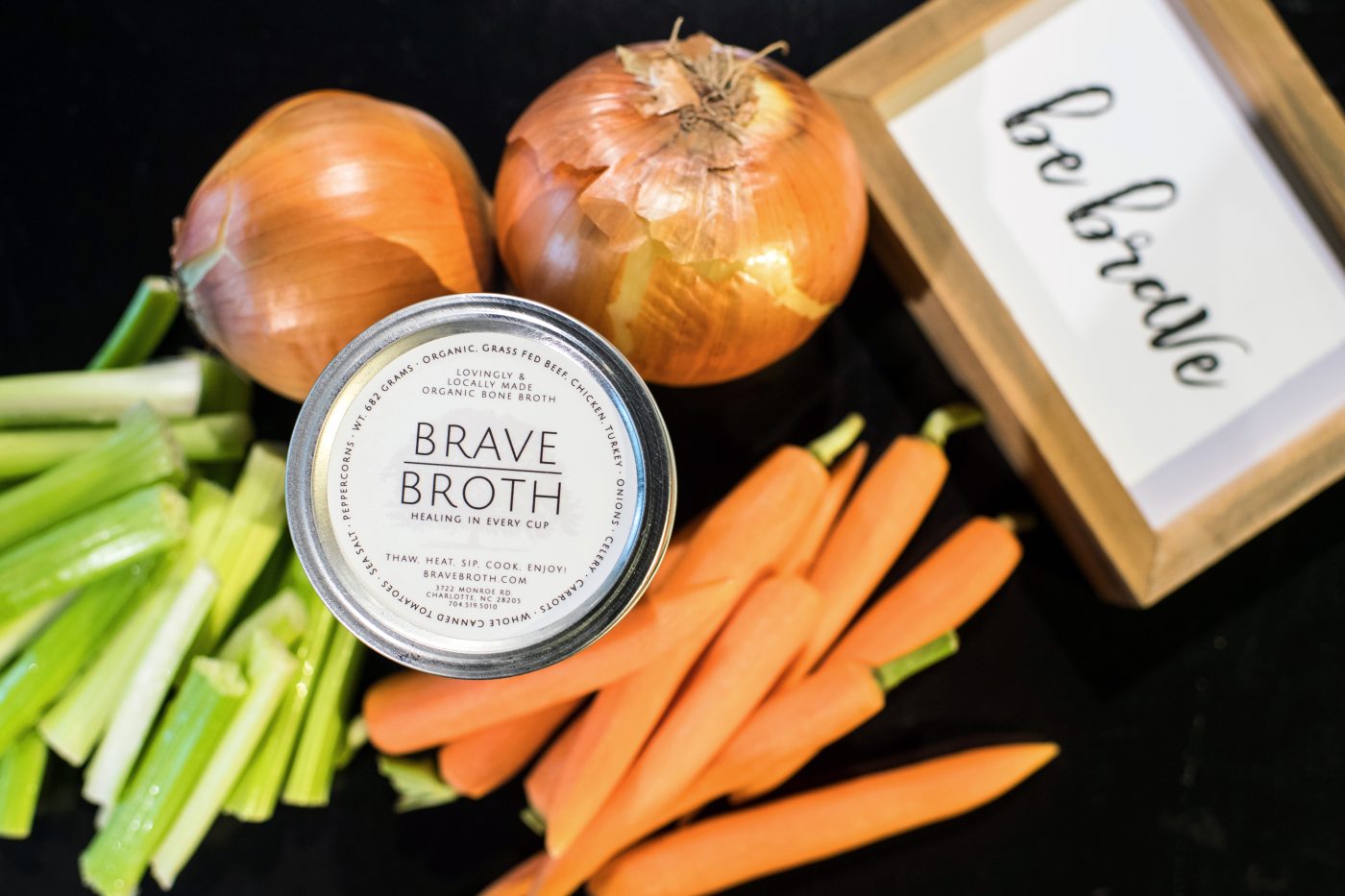 Reid’s Fine Foods and Green Brothers bought into the quick broth concept, and Joanna’s vision came to life across the city. Thrive Wellness and Integrative Health Carolinas followed suit. Pints of the protein-rich Brave Broth are available for delivery as well. The new business owner sells every drop that she makes. And she finds herself in the kitchen each day cranking out batch after batch. But, she says, “Brave Broth doesn’t feel like work as much as it does a calling.’”

Joanna handcrafts Brave Broth with locally sourced, organic grass fed beef and poultry bones mixed with organic vegetables and free-range turkey and chicken. Joanna’s restaurateur grandmother nurtured her cooking interest from a young age, and taught her the importance of the reboiling technique. She re-boils leftover bones, meat, and vegetables to create a weak stock. That stock replaces water for her next batch, deepening the flavor with the addition of minerals. Joanna sees to it that each batch has a specific depth of color, texture, and savory taste.

The name “Brave Broth” was inspired by a Bible verse sign hanging above Joanna’s daughters bed. The verse reads “Be Brave. Be Strong. Let all you do be done with Love.” 1 Corinthians 16:13. Since the mother of four was terrified to take the “all in” leap to start her own business without a culinary degree, Joanna knew that she wanted to incorporate the word “Brave” into the name for constant motivation.

Brave Broth is ever-expanding amongst the Queen City as its first line of local, organic, grass-fed bone broth. Joanna is currently aiming to double her weekly production with the addition to new kitchen materials and employees. Her goal is to produce enough to shop past Charlotte, into North Carolina- and hopefully nationwide.